What are all these accounts on my Windows Phone for anyway?

One of the interesting facets of Windows Phone 7 is how much it is tied to accounts you have on other services. Naturally, if you want to make best use of the People hub you'll need to add in some social networks such as Facebook, Twitter and Linked In, but before that there's another layer of accounts that are more fundamental to your Windows Phone experience.

First up is the main account your phone will be tied to, and this needs to be a Windows Live account. Just as many Android devices look for a Google Account, your Windows Phone is going to look for a Live account. You can't really miss out this step, so head over and get one set up. Don't make it too disposable, as it will be tied to your online identity (rest assured though, you'll get to your Gmail soon enough and that can be the main email account on the phone if you want it to be).

One thing that's very important to understand is that you cannot switch the primary Live accounts on your Windows Phone without wiping all the data on the handset. If you are setting up a new Live account, think carefully about what email and name you use. For those of you with an existing account, that's likely the one you want to use.

Next up is the Xbox Live account, which is identified by your "Gamer Tag" name. This is associated with a Windows Live account, and should be the one you use in your Windows Phone. There are limited options to change this association, so be careful choosing your first Gamer Tag name. You can only change this Tag if you have access to an Xbox (a web browser on your PC or Mac is not enough), and after the initial association you have to wait 30 days before you can make a change.

You also want to make sure the country of your Xbox Live account is where your credit and debit cards are registered. Once you set your country location, it's fixed and you're there for the rest of your Xbox career (there are some tiny exceptions, but they are very much edge cases and won't apply to 95% of the user base). I've had to set up another Xbox Live account as my initial account was set up as a US based account, and all my cards are in the UK.

Finally, in the "built in" account stakes, you have the Zune Tag, which you can set up from the Zune PC client, or by logging on to Zune.net through any browser. Much like Xbox Live, your Zune Tag is a name that will be associated with your Windows Live account. Microsoft's music based social network hasn't taken off in the way that the Xbox Live arena has, but it does have a nice recommendation engine that looks at the music you play to help build up a list of other artists and albums to explore. Depending on your country, you may have the music subscription service available through your Zune account as well. 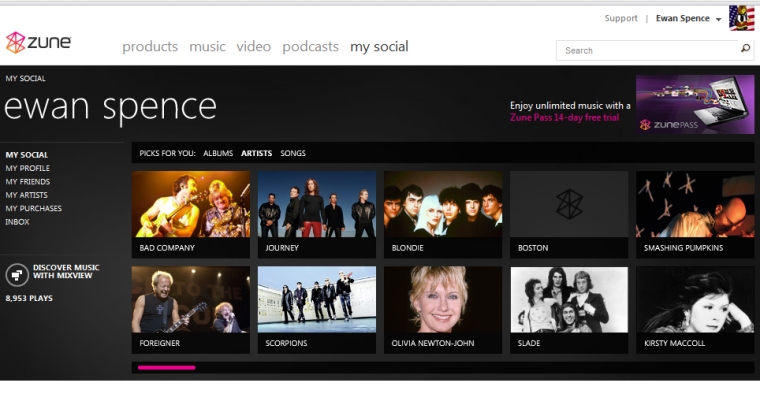 Of the three accounts, the Zune one is pretty much optional, although most people will likely explore it once the desktop software is installed. Xbox Live is pretty much required if you'll be playing games on Windows Phone as the achievement and gamer points system in the Xbox Live titles will draw you in. And of course every manufacturer likes to have some idea where their user base is, so the requirement for a Windows Live account is broadly similar to Android looking for a Google account and iOS devices wanting to be hooked up to iTunes before things get underway.

The only wrinkle is if you have multiple identities, and perhaps have some of these services on separate accounts for personal reasons (or set up as a US resident and you're in the UK, which covers the six people who imported a Zune HD media player...)

But for most people, their single Windows Live account will be used, and this will set up their Xbox Live and Zune accounts in the background, with their Tags created as required when they start to use the services. Existing users of Microsoft services will have an account ready to go, and for everyone else it's a simple process to sign up and one that's the norm within the smartphone world.

Filed: Home > Features > What are all these accounts on my Windows Phone for anyway?