How to: Get better sounding music and better music control

If you're anything like me, your Windows Phone came with a cheap set of outer-ear ear-buds. They sound tinny, are uncomfortable, leak tsk-tsk noises to the people around you and, if you're very, very lucky, might even have a call-pick-up and 'pause' control inline in one of the wires. All a bit bare bones, isn't it? Don't you deserve better? Absolutely. And I'm here to help, with a reminder that there's more to audio than the 3.5mm jack on your phone and your supplied cheap 'buds.

The secret isn't that much of a secret, since many people have been using this technology for years, but it's something that can come to the rescue in the aforementioned unfortunate case of the poorly served Windows Phone owner.

It's A2DP, short for Advanced Audio Distribution Profile, and means that all our phones know how to (encode and) send stereo audio over Bluetooth to a set of Bluetooth headphones. That's stage 1. Stage 2 is to acquire some Bluetooth stereo headphones that also have media controls built-in. In my case, a budget Nokia BH-214 adapter, which comes with a nice set of proper in-ear 'phones and costs less than £20 on Amazon. 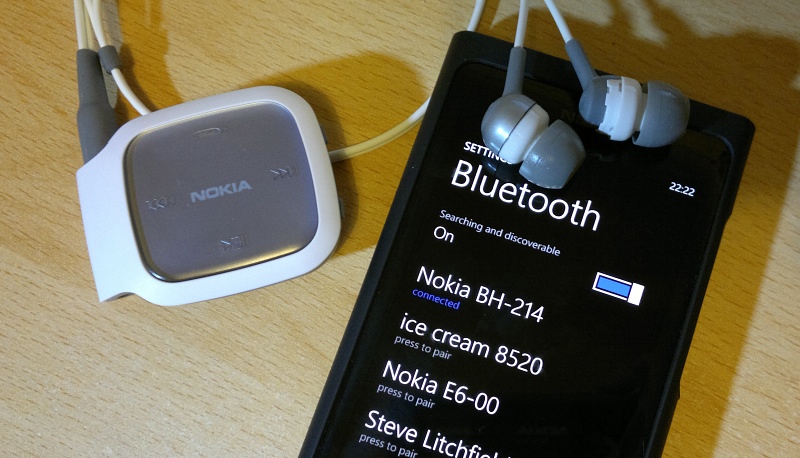 With my Windows Phone connected to the BH-214, then, I can control my music or my podcast playback using the play/pause/rwd/fwd controls on the adapter, clipped to my lapel or pocket. I can pick up calls and answer them using the built-in microphone, I can control the volume and, best of all, the sound quality is far improved because of the better fit in the ear and the better audio insulation from the world. Finally, there's no leakage to the outside world, so there'll be less complaints from your neighbours.

Sound good? Here's the walkthrough. Although I'm showing the Nokia Lumia 800 and a Nokia adapter, there's no reason why this can't be any Windows Phone and any stereo Bluetooth adapter that has media controls.

On the Bluetooth adapter, press and hold the power button until the LED comes on and keep holding the button down until it starts flashing faster in blue. Although this is for the BH-214, the procedure is likely to be near identical if you have a different adapter.

On your Windows Phone, go into Settings/Bluetooth and flick Bluetooth on, if it's not already. If it's already on, turn it off and then on again (to force a refresh/scan of its surroundings).

2. Pair the phone and the adapter

On the phone screen, tap on the name of your adapter, which should appear in the list of surrounding Bluetooth devices (e.g, "BH-214"). After a few seconds, the small note 'Connected' should appear underneath the adapter name. The LED on the adapter will also return to normal colour/rate. You're connected!

To try the new control, start some music playing on your phone and turn up the Windows Phone system volume using the hardware control keys to some sensible level (e.g. 25/30). Music should now be coming out of your connected headphones and should sound great. Make fine adjustments to the volume using the volume keys on the adapter itself.

Have a play with the playback controls too and verify that this also works for podcasts. You're sorted!

When you're done listening, pause the music/podcast and press and hold the adapter power button to turn it off - you should hear an audio 'winding down' cue and the Bluetooth link will be automatically disconnected. When you next want to listen via Bluetooth, you've only got to power the adapter up again (without the extra long press, of course) and a Bluetooth connection will be automatically reestablished.

I mentioned above about the system volume controls on your Windows Phone. These and those on the Bluetooth adapter are compounded together, i.e. they're independent and both have to be turned up to a reasonable level for you to hear anything. So if the music or podcast level is too quiet, turn up both sets of controls as needed.

Filed: Home > Features > How to: Get better sounding music and better music control