One of the unique selling points of the Lumia 920 and Lumia 820 was the adoption of the Qi wireless charging standard. Wireless charging is not a new technology, but whenever it has been employed in any product, whether it be the Palm Pre or your electric toothbrush, it seems to have struggled to catch mainstream attention. With these Lumia devices being perhaps the most mainstream application of wireless charging, and because Nokia adopted a standard rather than a proprietary method, wireless charging may just have come of age. How does it work though? I explain.

Note: I'm going to assume that the reader knows nothing about electromagnetic induction, and so I'll start with the fundamentals and we'll work from there.

In the 19th century, Michael Faraday discovered that magnetic fields could drive electric currents. In other words, it's possible to transfer energy to a length of wire without touching it. Without getting into the mathematics of it, this is quite simply what is meant by electromagnetic induction. It was this discovery that led us to understand that electricity and magnetism are components of the same force, hence the word electromagnetic, and the word induction is used because we are inducing a current to flow through a wire.

The more magnetic field lines you can wrap around a wire, the greater the current you can produce. Anyone who has done the classroom experiment of sprinkling Iron filings over a magnet will have seen the pattern of field lines that are observed (as shown in the photo below). Therefore, the best way to produce the greatest current is to wrap the wire around those field lines, so each one can be re-used for every turn of the coil. Fundamentally, you cannot have electricity without magnetism, and vice versa. Therefore, the converse of what we've established here is that a magnetic field is produced by a flowing electrical current. For example, passing a current through a coil of wire creates a similarly usable pattern of magnetic field lines as a permanent bar magnet.

The real trick to performing a wireless power transfer is known as inductive coupling. Whereby an electrical current is applied to a wire coil, and the resulting magnetic field is passed through an adjacent secondary coil, in which a current is then induced. If that secondary coil is then connected to a battery charging circuit, we have an – albeit crude – wireless charging device.

In principle, this is a highly cool idea, and one may rightly question why it hasn't caught on already? The reality is that getting inductive charging to work reliably has been incredibly tricky. Anyone who has problems maintaining a consistent WiFi signal has experienced how temperamental wireless connections can be, and how susceptible they are to external interference.

Add to that, there has also been a chicken and egg problem of manufacturers being reluctant to make wireless chargers when there were no devices that needed them, and in turn few manufacturers were interested in making devices that could be charged wirelessly when there were no wireless chargers! Fortunately, that situation has slowly changed as wireless add-on accessories have been produced and an industry standard known as Qi (pronounced Chee) has been agreed by the Wireless Power Consortium.

Qi is the standard that Nokia has adopted in the Lumia 920 and Lumia 820. Thus, unlike the Palm Pre, users will not need a Nokia specific charging device to wirelessly charge their smartphone.

Information is power too!

The Qi standard has incorporated several tricks to make sure it is as efficient as possible. To maximise power transfer, the transmitter and receiver coils need to be aligned so that the receiver is capturing as many field lines as possible. Qi suggests several ways to build features into devices that ensure this. For example, an additional magnet can be used to provide tactile feedback (i.e. a pulling force) to the user so they set their phone down in the optimal position. Alternatively, charging plates can be built with an array of coils, so that no matter where you lay your device, it will be sufficiently aligned with one of the coils for charging to occur. 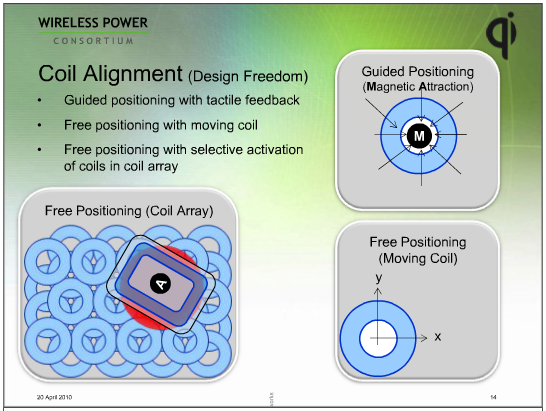 The Qi standard also incorporates a limited communication protocol in addition to power transfer. With this, the receiving device can tell the charger how much power it requires, and when it is fully charged. With this control information, the charger can adapt its output to suit any device and shut itself down when the receiving device is fully charged. 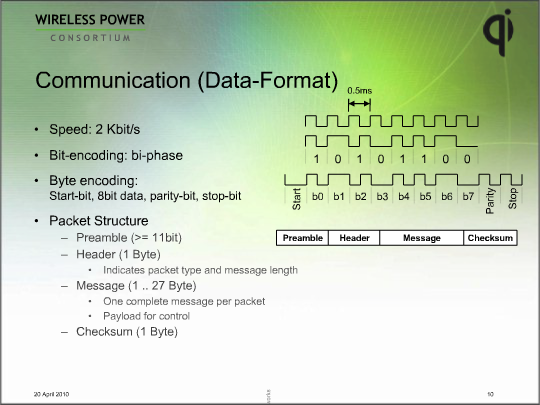 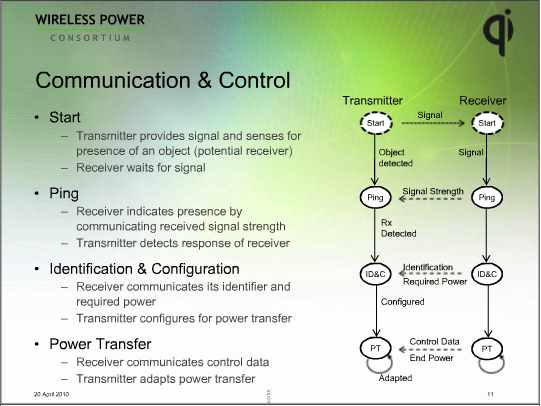 Tackling the problem of ubiquity

Nokia is a member of the Wireless Power Consortium, who developed the Qi standard. As part of Nokia's marketing drive with Windows Phone 8 and Lumia devices it has a "…plan to make wireless charging as ubiquitous as Wi-Fi is today" (source).

The first step in its plan was announced at its New York press event. Nokia has formed partnerships with Virgin Atlantic and American coffee shop chain The Coffee Bean & Tea Leaf to provide charging plates on (or built into) tables for customers to charge their phones while they eat or drink. 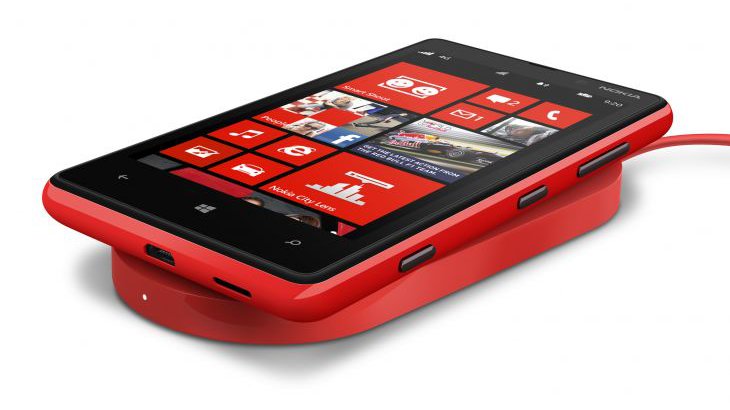 In its press release for the Virgin Atlantic agreement, Nokia stated:

Espoo, Finland and New York, NY - Nokia today announced a deal with Virgin Atlantic to offer wireless charging facilities at its London Heathrow Clubhouse for passengers who want to recharge their phones before a flight.

There was also a press release for the Coffee Bean and Tea Leaf agreement which stated:

It's hoped that even more companies will agree to have Qi charging plates on their premises over time, but if we take NFC as an example, the roll out will be a slow and steady one. Nevertheless, this is looking to be the shape of things to come, and it's hoped that more technology companies will support the Qi standard, lest we face yet another standards war!