Want absolute purity? Think about NOT reframing that Lumia 1020 photo!

Last week I looked into 'oversampling' as featured on the Nokia Lumia 1020 (and the older 808), with the main takeaway for AAWP readers being that the default Windows Phone Camera application only presented a low grade 5MP sample of the underlying 41MP sensor, while Nokia Pro Camera worked with the hardware and OS to incorporate information from every underlying pixel, i.e. oversampling, to produce photos with less noise and clearer details. There was one aspect of this analysis that needs more investigation though - it turns out that all reframed photos are indeed generated from the full resolution JPG but there's an initial 'purer' 5MP version that you can choose to keep.

It's a fair cop - there was one nuance of the way the Lumia 1020 camera works that I got wrong in my previous article (and I've now included links in that to point to this amplication). Think about the 'zoom later' facility and it's obvious that the way the 1020's Nokia Pro Camera software works is to intelligently crop/downsample the 34MP/38MP full resolution JPG as needed. So you're starting off with an initially 'compressed' version of the original image, complete with a degree of artefacts and approximations. Unsurprisingly, the result is an 'oversampled' 5MP image which isn't as pure as it could potentially have been as if it had been constructed with data taken directly from the 1020's sensor.

However, I can exclusively reveal that the engineers at Nokia had thought of this. They knew that 'reframed' images had to be compromised slightly - there was no way round this, given that an uncompressed version of the image would have run up towards a Gigabyte each(!) - so working from a 15MB 34MP JPG it had to be. And, to be fair, the algorithms used to work from this are pretty good, with admirable detail and less artefacts than you might expect. But there's another scenario allowed for.

The initial 5MP 'shareable' image isn't, it turns out, downsampled from the 34MP JPG - it's generated from the RGB data coming from the sensor chipset. It's true that the oversampling done here is being done in software rather than in hardware (as on the older Nokia 808), but there's no intermediate 34MP JPG step/file in the way. However, the moment you hit the 'reframe' tool in Nokia Pro Camera, to zoom/pan/rotate the image, however slightly, the underlying full resolution image has to be used as the new image source, meaning an extra processing step that loses some quality (however small).

In other words, having taken a photo with the Lumia 1020 in Nokia Pro Camera, whether taken full frame or 'PureView zoomed' in, your initial sight will be of the highest quality 5MP image. If you want to keep this best quality then this is the one to upload or share. Do this before you're tempted to reframe and play with the image, as this will necessitate working from the compressed original instead and will result in a slightly lower quality photo.

These differences are small, but they are demonstrable. Here are three test photos taken today on the Lumia 1020. In each case, I show an overview of the whole scene (so you can see how far I've cropped in), along with a deliberately magnified crop comparison between the original 5MP image (top) and the reframed version (below).

The perfect test for image purity is, as usual, to pick something with text, with fine and detailed lines that need capturing and depicting, in this case a batch of books on a bookshelf, shot in semi-macro fashion, from around 30cm: 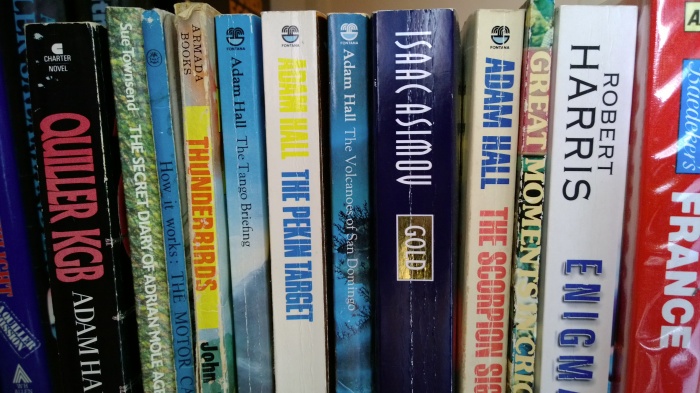 So, here are the heavily magnified (to make the point more clearly, even to those with low res monitors or imperfect eye sight) crops of the original 5MP image and the one available once this has been touched with the 'reframe' system. 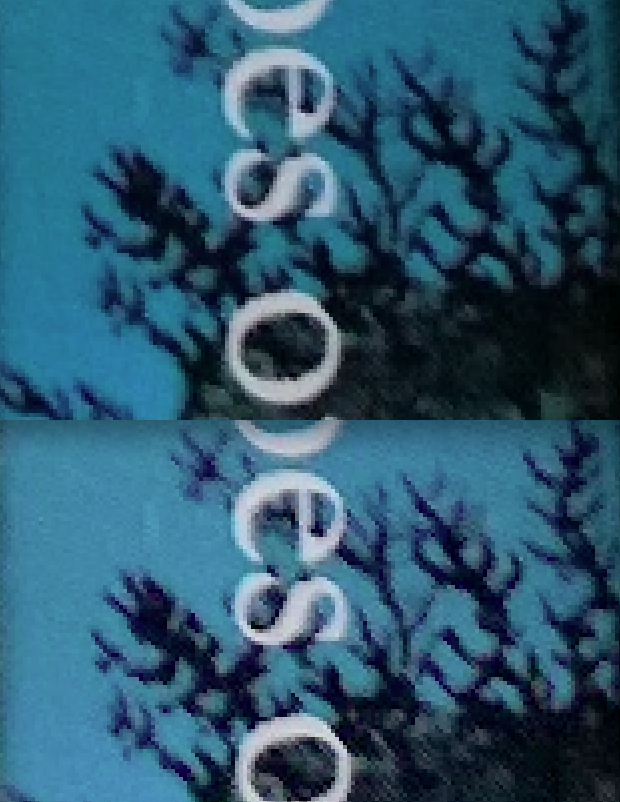 In fairness, the text content itself isn't that different in the two images (though very slightly more jagged in the bottom crop), but the depiction of the tree background on the book spine is very different. The 'purer' oversampled crop shows branches which look fairly natural, while there are far more digital 'jaggies' in the reframed crop, products of downsampling from a compressed original.

This time I went for maximum light, to eliminate any low light sensor noise, with a willing(!) doll in a sunny bedroom: 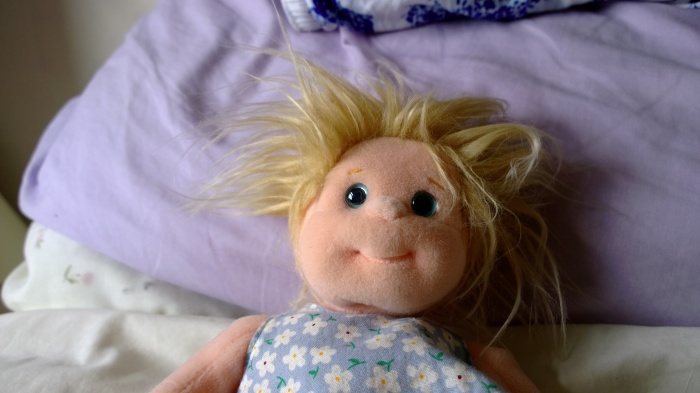 Again, here are the heavily magnified crops of the original 5MP image (top) and the similarly sized crop available once this has been touched with the 'reframe' system: 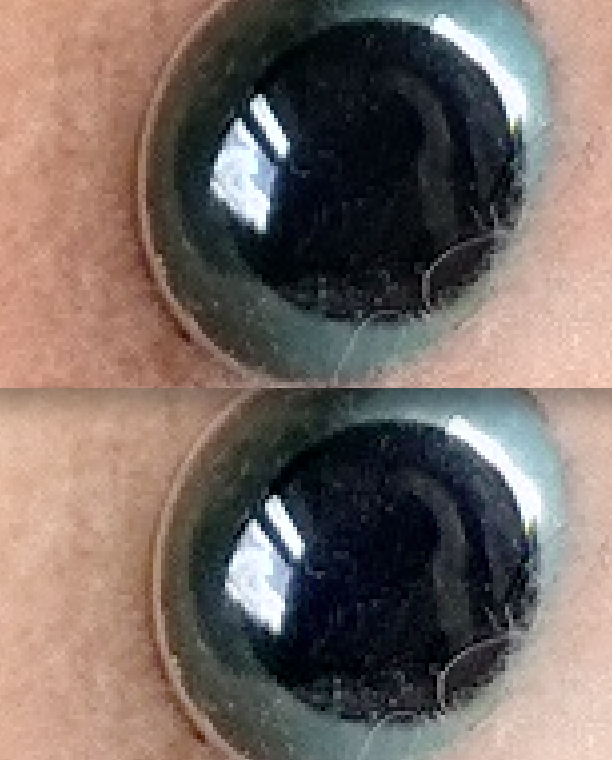 The differences here are more subtle, but they are still present. The colours are somewhat less vibrant, there are more digital artefacts inside the blackness of the eye and the jagged edges of the windows reflection are more unpleasant.

Finally, let's move away from macro-ish subjects and look at an outdoors scene/landscape, focussing on the medium-distant house: 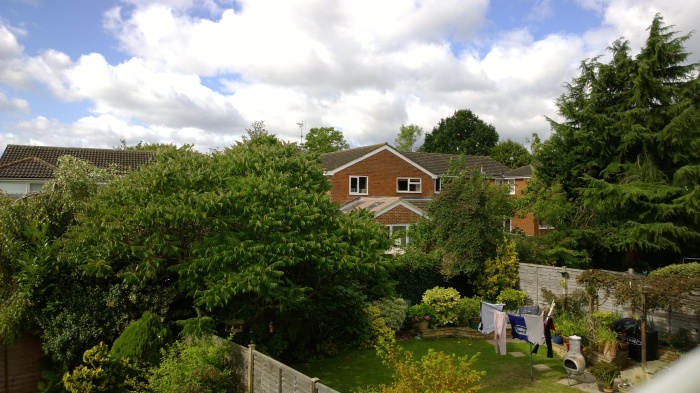 Again, here are the heavily magnified crops of the original 5MP image and the reframed one: 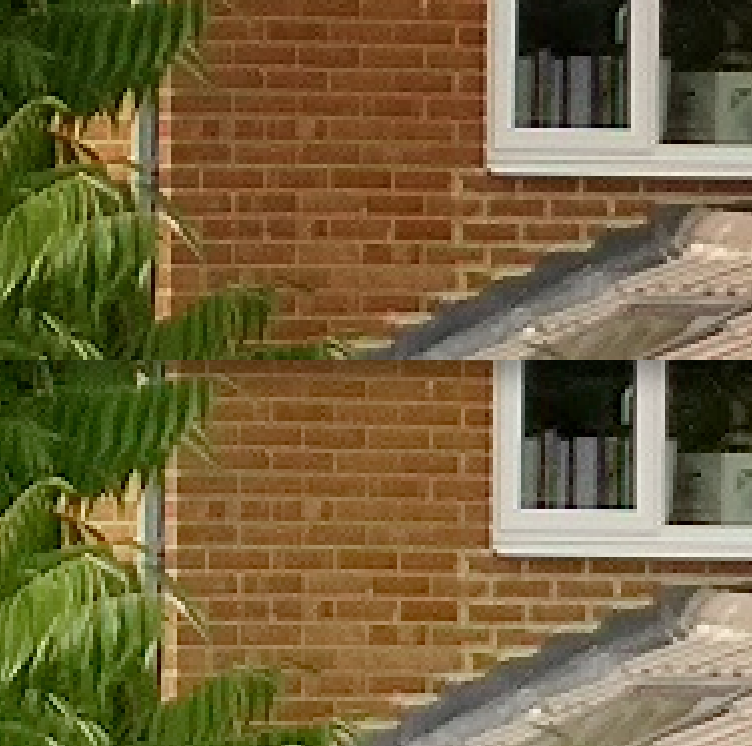 Happily, it's clear here that, the further we get towards what Nokia calls 'high frequency' content, natural textures, patterns and real world 'fractal' detail, the less it makes a difference whether the image comes from the original sensor data or from a full resolution JPG. This is because the JPEG compression system is insanely good at representing this sort of detail - JPG was designed for photos and hates being used in block colour/textual situations (as seen above in the book spine example).

There's an extra twist to this saga. On the Lumia 1020 (as on the Nokia 808 before it), you can zoom in at capture time by sliding your finger up the screen. How does this affect the oversampling situation?

When you use the 2.5x 'lossless' PureView zoom on the Lumia 1020, effectively cropping into the full 41MP sensor area, the 5MP image you gain immediately is, again, derived from the RGB data from the sensor, so you keep the full image quality. But, when you use the much publicised 'zoom later' system (in this case, perhaps zooming back out again) you're obviously then having to revert back to downsampling from the full resolution JPG and so the image quality will be slightly lower.

How you think about the analysis above is determined by your reaction to the crop comparisons. If it's "but they look, near enough, the same to me, what's the fuss?" then move on, just use the Lumia 1020's camera as you see fit, immediately reframing and zooming away - don't worry, the images will still be extremely decent and, as we saw above, probably indistinguishable for real world scenes.

However, if you're struck by any of the differences above and are 100% determined to make use of these revelations then here are some take aways:

I realise that these maxims are somewhat at odds with Nokia's marketing of the Lumia 1020's zoom later/dual capture system, but do note that most people won't notice any difference in quality when using the supplied reframing system. This article, this analysis, these maxims, these worries, are all for those users who want to capture the very highest possible quality.

The obvious response to the last sentence is that if you want the very highest possible quality photos then you'd probably be using a DSLR in the first place. But there are many well documented advantages to using the phone that's always with you as your capture device and at least you now know how to eke out that last 1% quality from the Lumia 1020 sensor!