[Author's note: While the N8, featured for many of the photos below, runs atop what is now an 'obsolete' platform, its camera technology still stands up to most phones these days. Only the noteworthy flagship models, such as the 808 Pureview and Lumia 1020, have made the N8 start to show its age. Most top phones still, arguably, have an inferior camera to this one-time Symbian flagship. So here in this article, I'm not arguing that you should all go and start using the N8 as your primary smartphone. What I AM suggesting is that if you still have an N8, it isn't useless, it can still serve as a very capable camera. Also remember that it's still one of the few phones to have a Xenon flash too - not that it helps with astrophotography!]

In recent months, a hobby I've taken up is astrophotography. I'm still quite a novice at it and I don't have a powerful telescope.  I'm still just using smartphone cameras to to take images. To be honest, with the power of my telescope The Moon is the only object of which I can capture any detail at all. Jupiter just appears as a white disc, rather than the bands of beautiful brown and white that we all recognise. The only traditional smartphone camera I've had in for review which had enough sensitivity to capture all four of the Jovian moons was the Nokia Lumia 925. The Nexus 5 can only 'see' three of them.

With all of that in mind, hopefully my story may appeal to many who are curious about astronomy and are just getting started too, whichever smartphone camera you currently swear by! I'm still learning, and I have fairly low-end equipment as you probably do, or soon will have after Christmas! 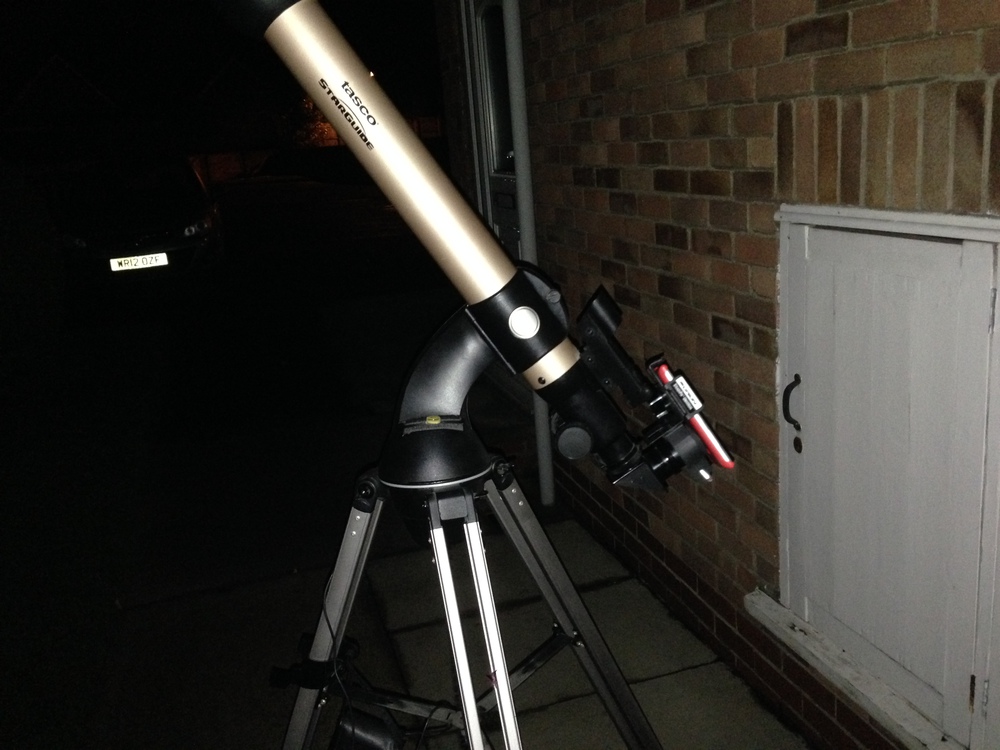 My telescope was generously gifted to me by a friend. It is a Tasco Starguide 60, which can be picked up on eBay for less than £200. It's a simple refracting telescope with a lens at the aperture that focuses the image down onto the eyepiece. The magnification is changed by swapping out the eyepiece. The (theoretical) magnification is then the ratio of the telescope's and eyepiece's focal lengths.

The telescope was given to me with three eyepieces: 20mm, 10mm, and 6mm focal lengths. The focal length of the telescope is 700mm, so that gives the following magnification powers.

At this point you can start looking at the sky and know how much you're magnifying all of those heavenly bodies. The next step is to actually start taking photos. Holding a smartphone to a telescope's eyepiece is certainly one way to do so, but it is certainly the hard way to take a great photo. Especially when you realise that the more magnifying power you have, the quicker things race across your field of view. 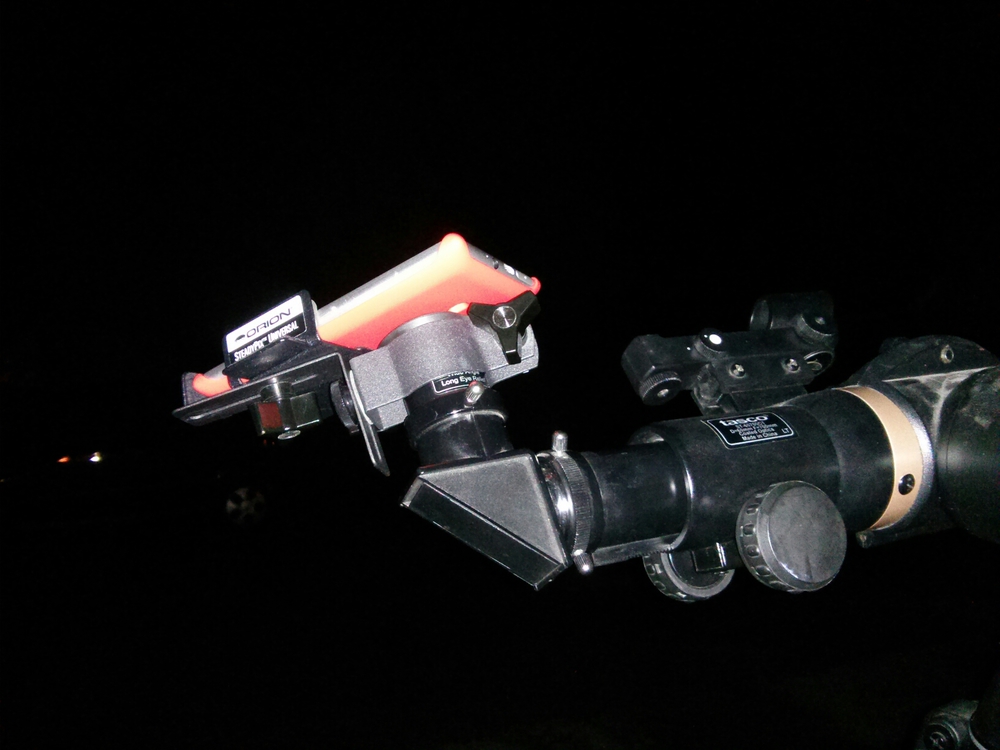 A more reliable way to photograph telescope images is to buy a clamp specifically made hold a phone to a telescope's eyepiece. I'm using the "Orion SteadyPix Universal Smartphone Telescope Photo Adapter" (about £60, disclosure: This was purchased on my behalf by Nokia Connects as part of a Lumia 925 trial). It's great for fitting all sort of differently sized phones, but that also means that it's an interminable faff to actually get the phone's camera aligned with the eyepiece and everything locked in position. That said, it's the best method I have - so far. 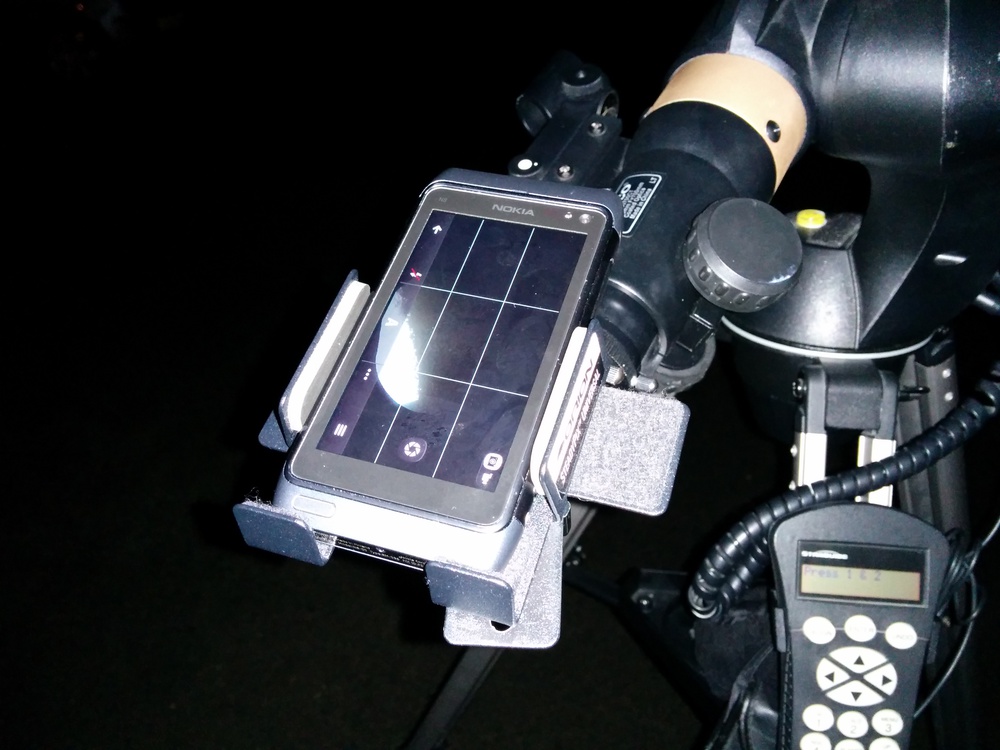 Upon training the N8-endowed telescope at The Moon, it was interesting to see that the relative brightness of the sun-facing side of the moon was causing everything but the area nearby the terminator (the line between the light and dark side of The Moon) was totally over exposed. My objective was to see what the N8 could do with default software, which meant I couldn't try high dynamic range (HDR) photography - maybe next time. Fortunately, the built-in Symbian camera app has manual settings. Reducing the exposure (and the contrast, just a little), and setting ISO sensitivity to "high" did the trick and all of the grey detail of our rocky satellite could be made out. 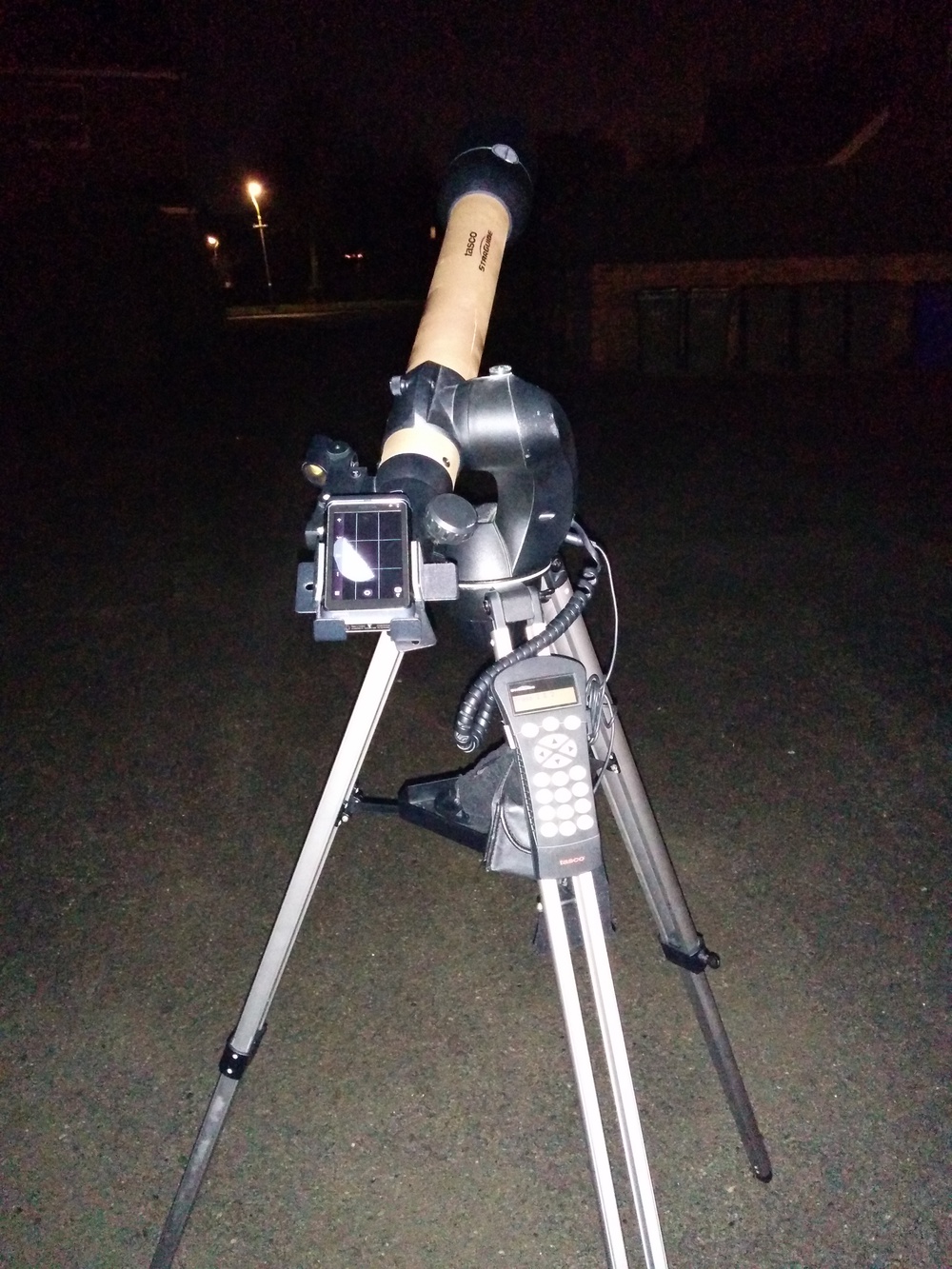 Aiming the Nokia N8 at The Moon

Both of the images below were taken through the 20mm eyepiece, giving a magnification of x35. The difference between the two was achieved by experimenting with the exposure level. In each case I've scaled the full size photo, and provided a 1:1 crop. Follow the links for the original images. 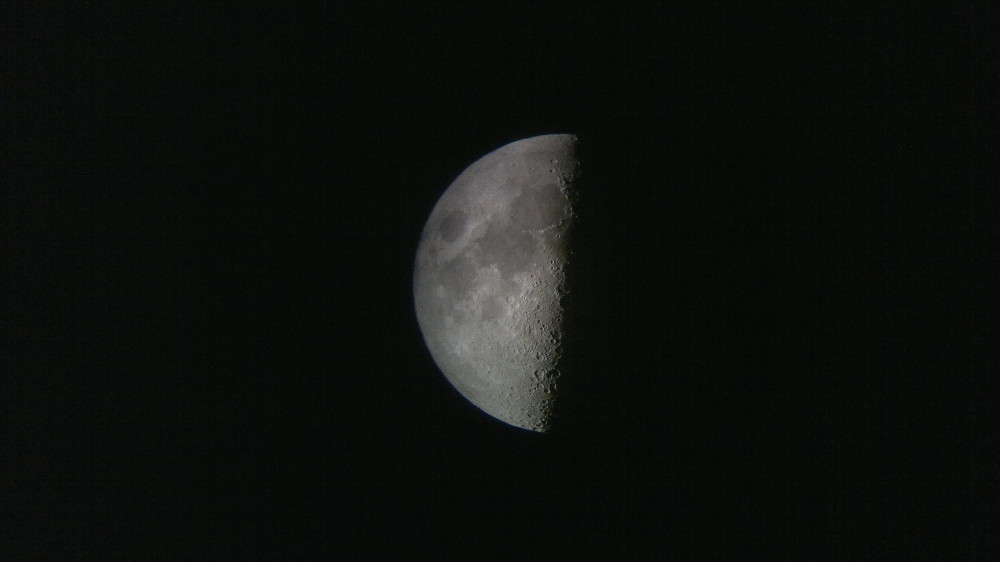 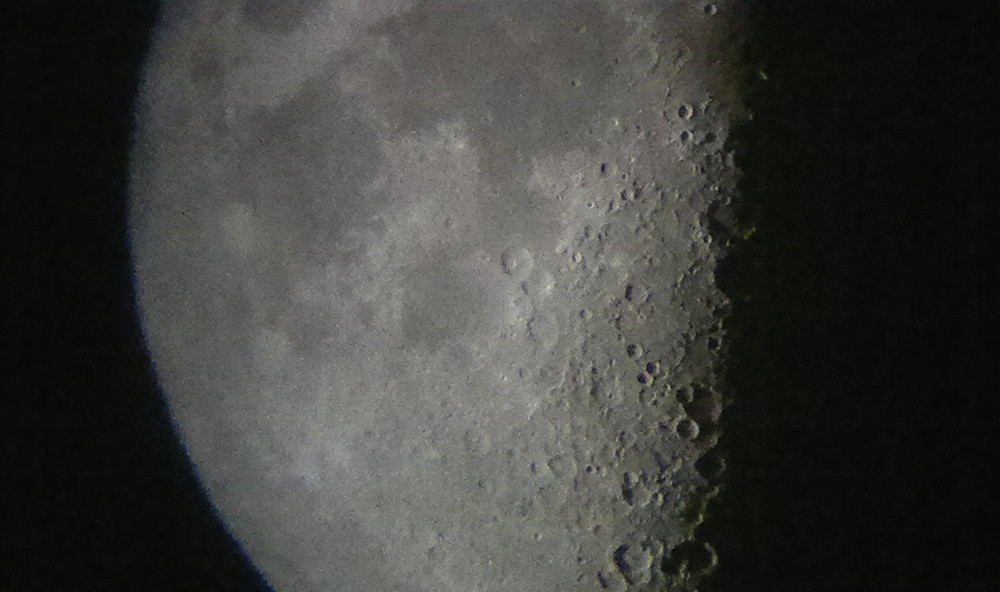 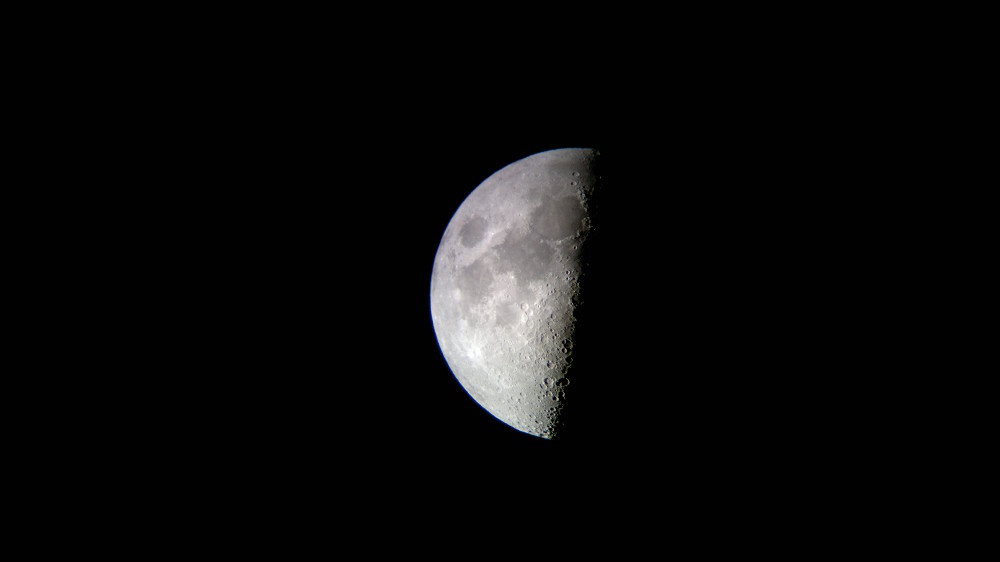 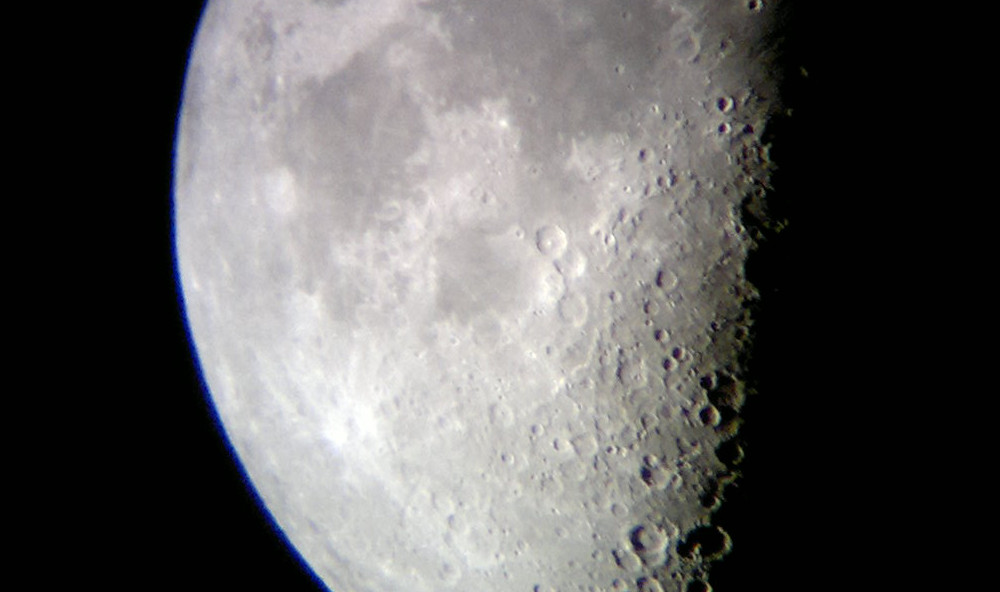 In those images, The Moon only took up a relatively small area of the frame, therefore to make better use of the N8's sensor the eyepiece was replaced with the 10mm model which boosted magnification up to x70. Below we have two different exposure levels taken at the higher magnification level. Again, the full image is scaled down, followed by a 1:1 crop underneath, furnished with a download link to the original image. 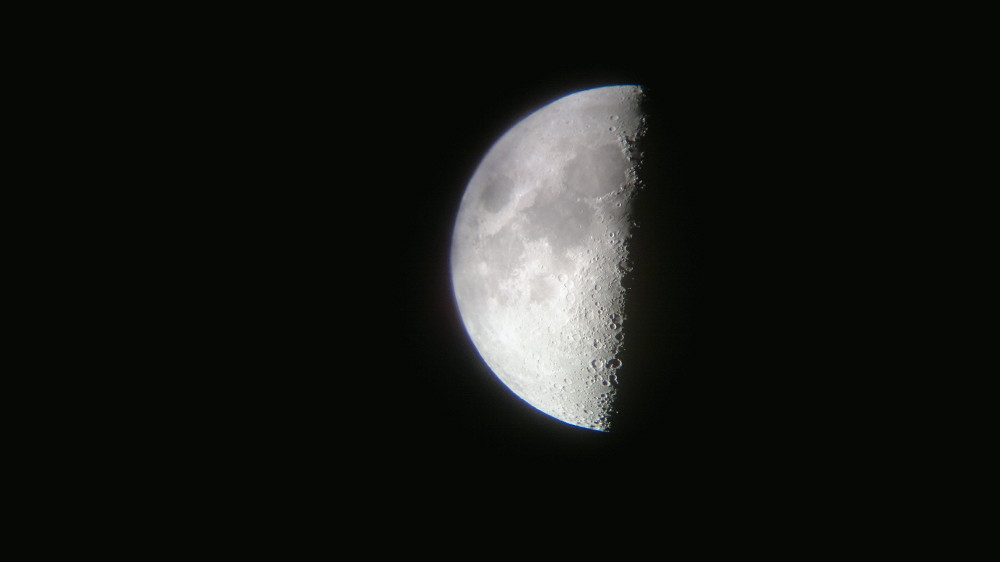 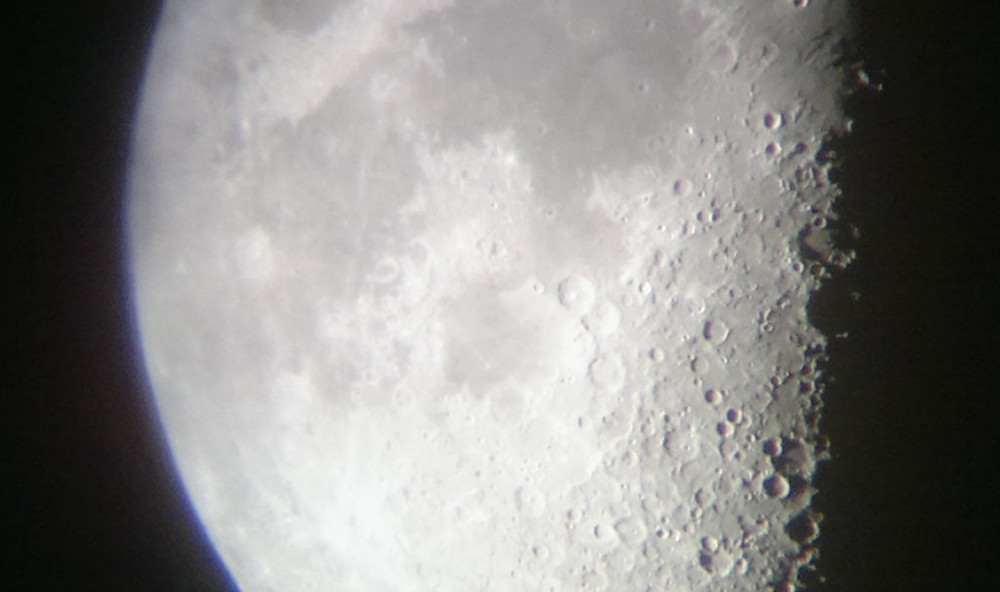 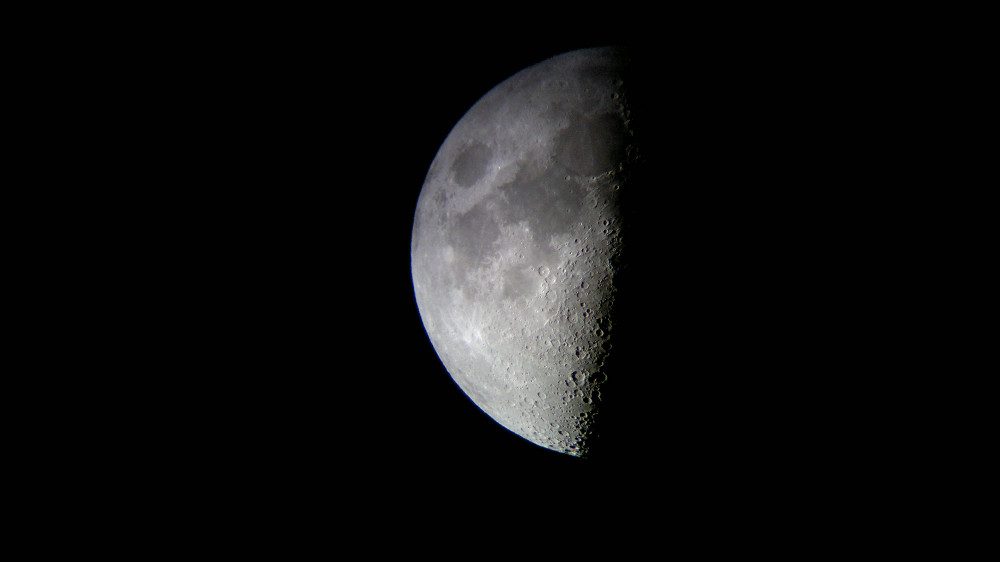 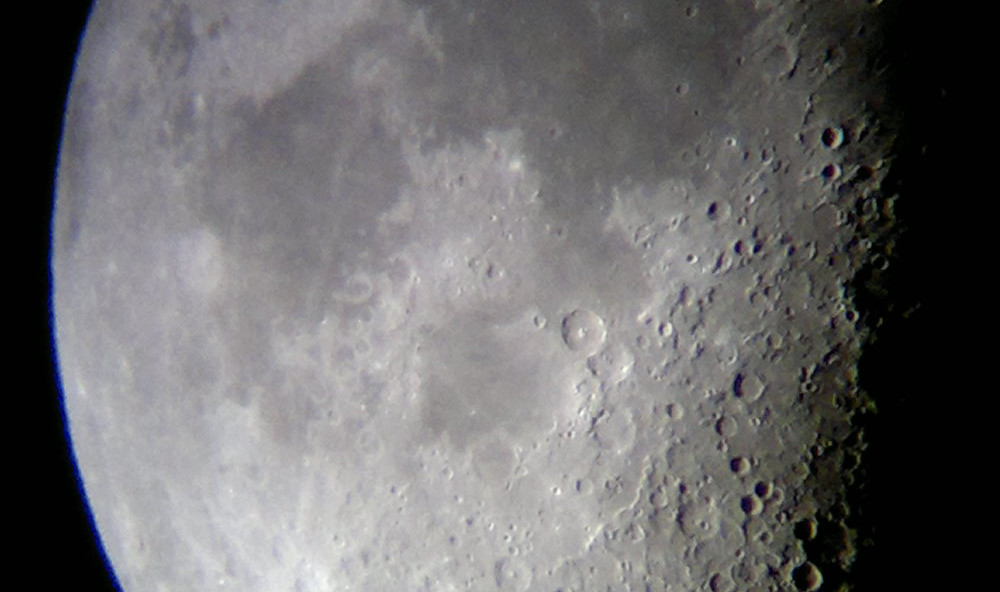 Following the increase in optical magnification I decided to commit the cardinal sin of using digital zoom. Purely for artistic reasons, of course, to better fill the whole frame. The first image is a straight zoom in. For the second shot, I rotated the N8 (in the adapter) about the eyepiece to put the moon in more of a landscape orientation. Again, there's a scaled image, 1:1 crop, and a download link. 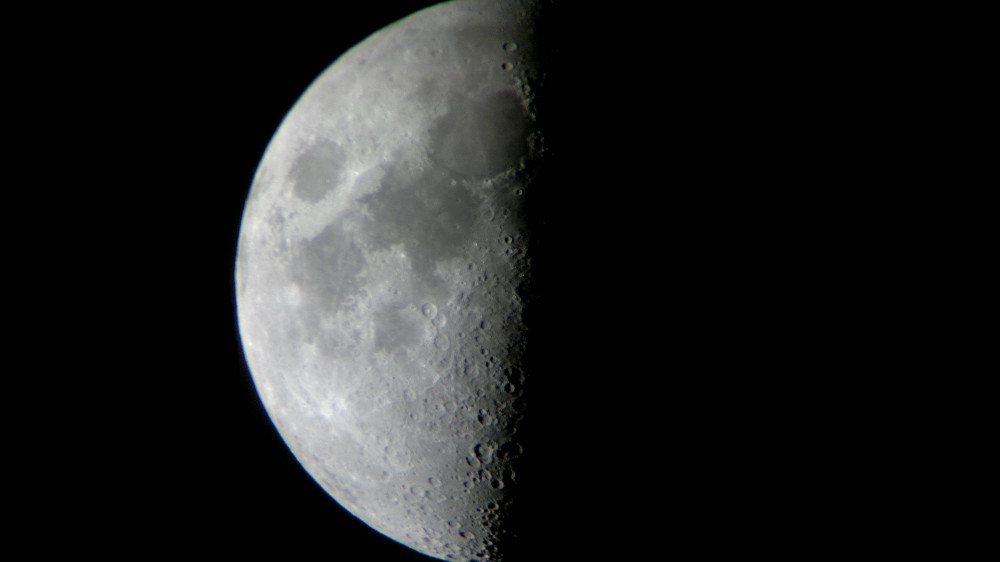 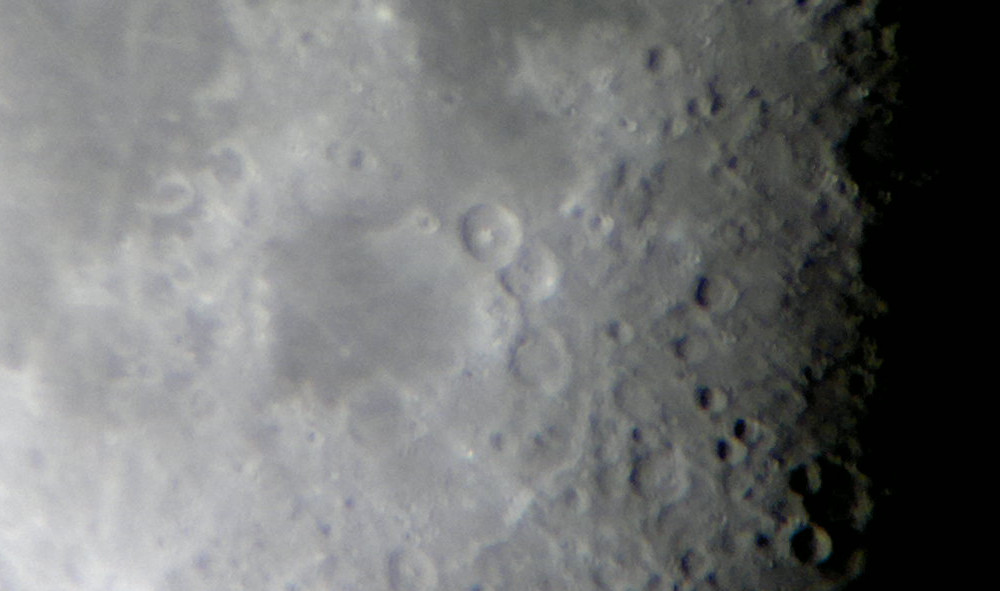 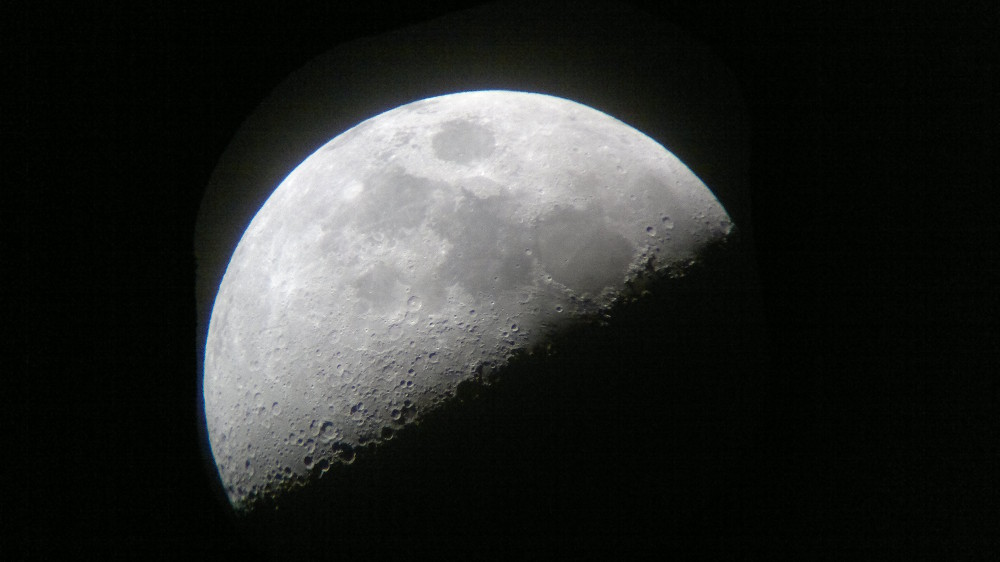 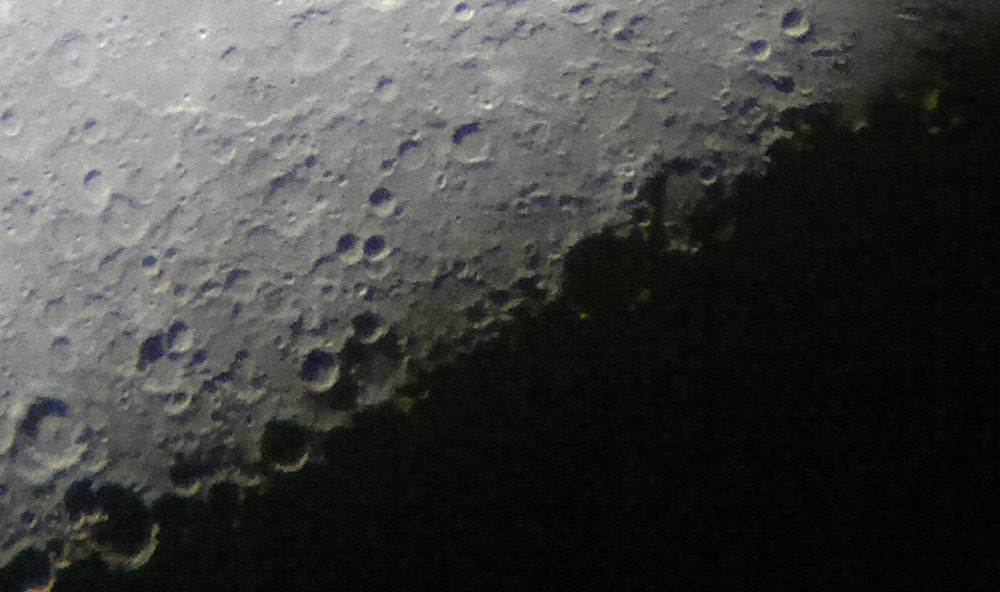 In the spirit of Steve's many "N8 vs" articles, here are some more 'moon shots' taken with other devices. Again, you can see the scaled image and a 1:1 crop with a download link. 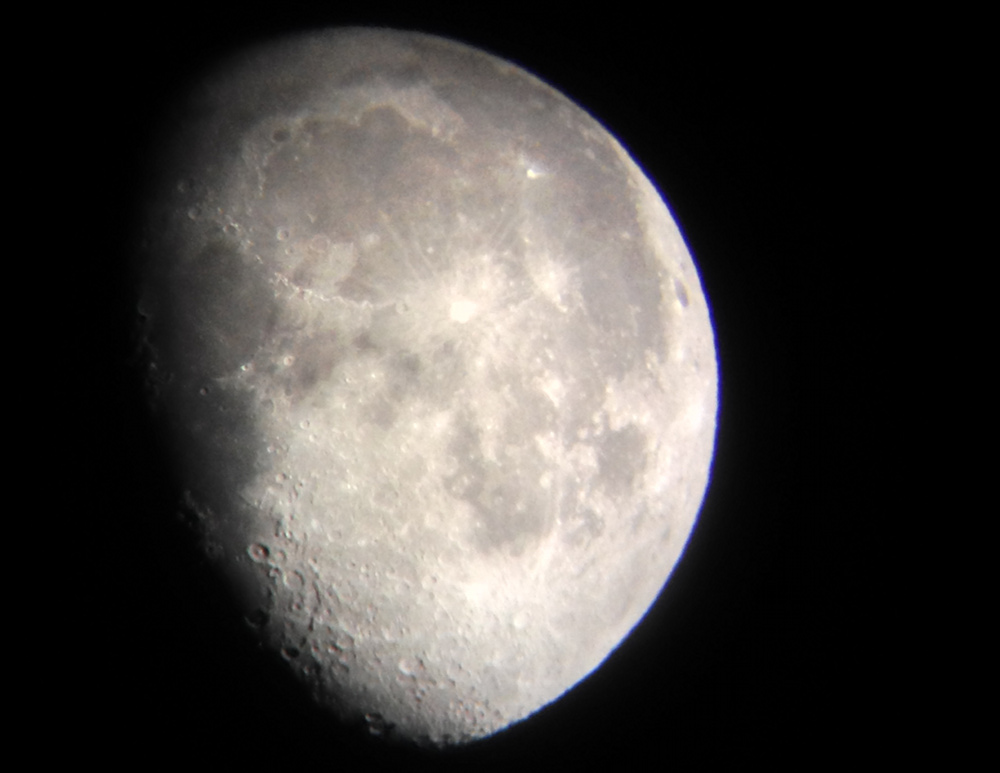 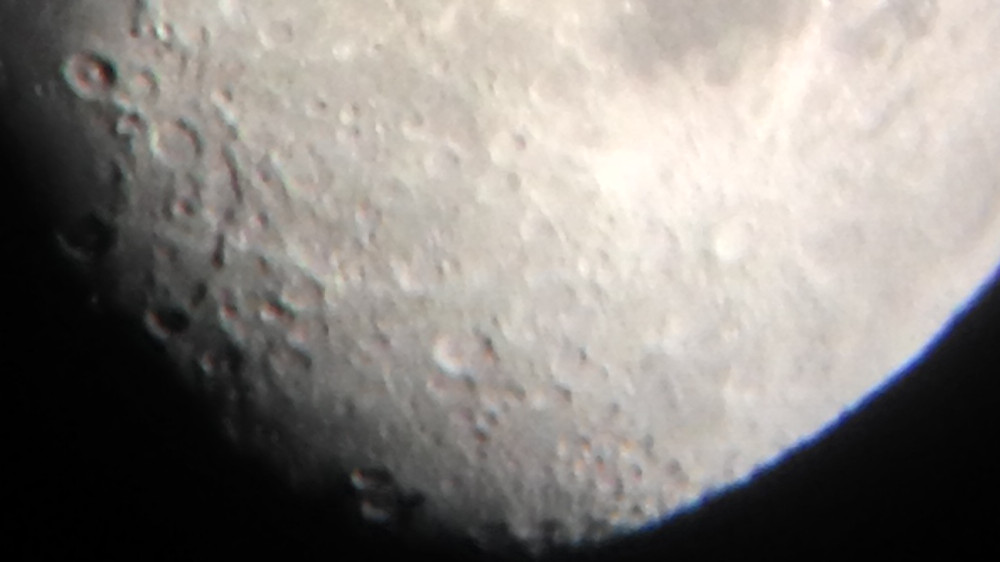 Interestingly, the Nokia N8 manages to generally bring out more details than the iPhone 5, based on the photos here. However, the iPhone 5's photos generally have higher exposures which may be washing out some of the detail it was capable of capturing. Remember that with the iOS camera application the only way to set exposure is by tapping on different parts of the image, rather than having a manual setting, unlike the Nokia camera phones. 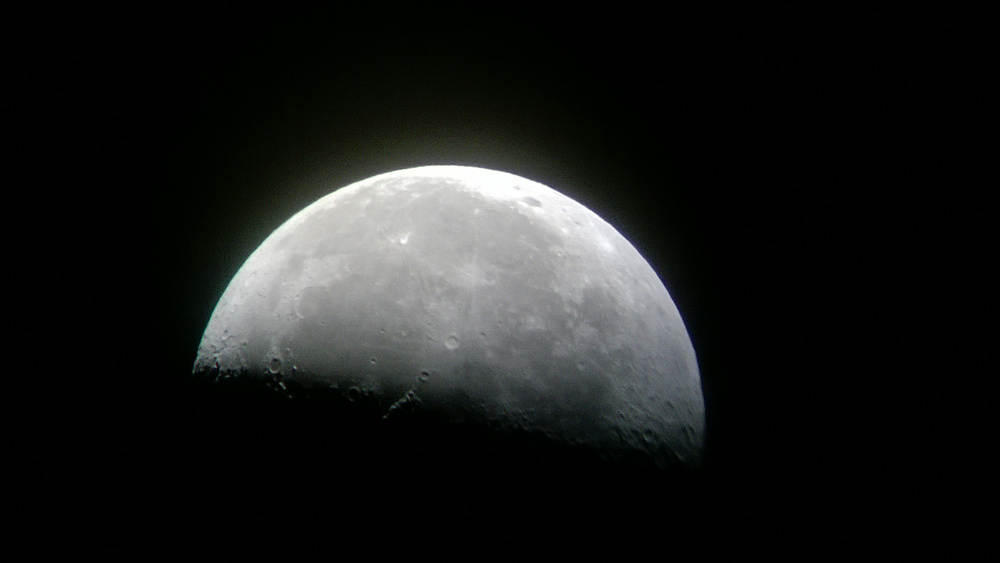 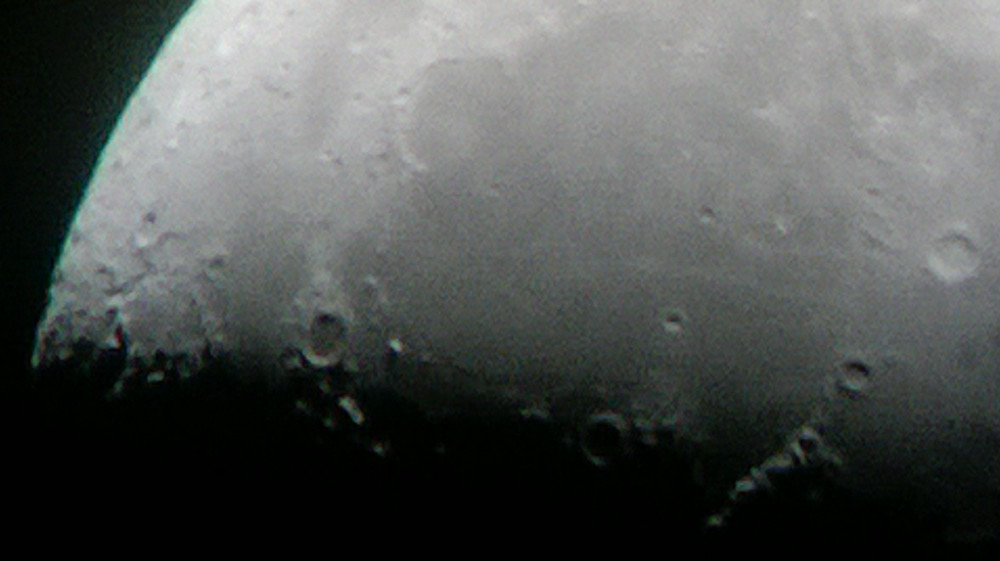 Based on the photos here, we see that the Lumia 925 appears to have a better innate dynamic range, managing to capture more light and dark areas without having to compromise on the exposure setting, as was the case with the manual settings on the Nokia N8. Overall though, the Nokia N8 still manages to pick out a lot more detail on from the same telescope. It should be noted that The Moon's terminator was at a different position (to the more recent N8 photos) and so there was less peaks and valleys for the Lumia 925 to capture. 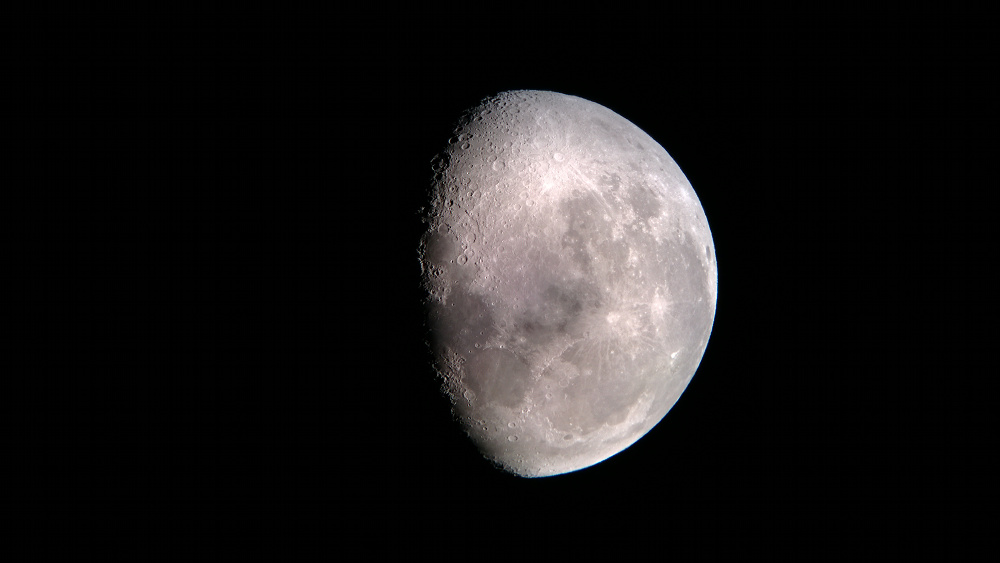 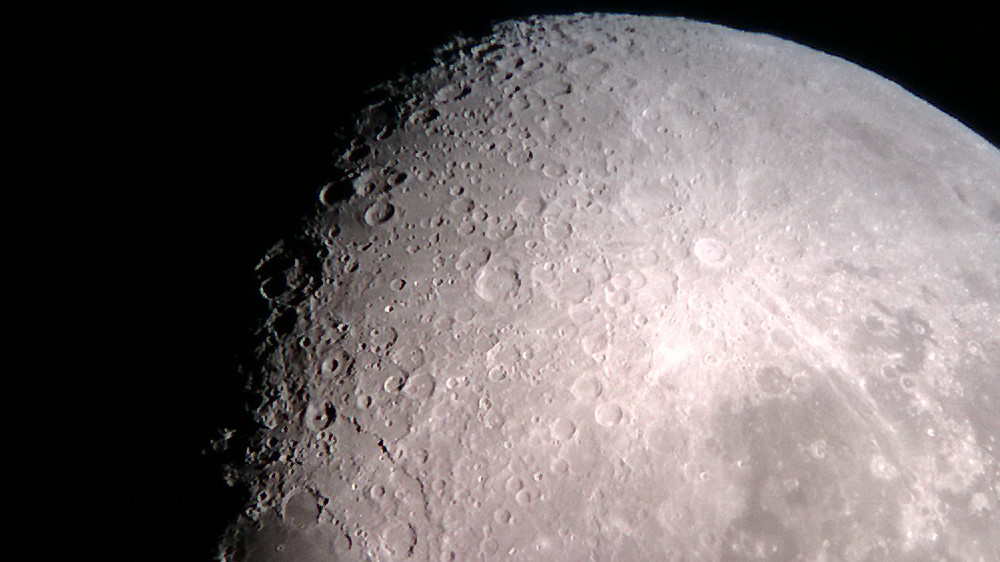 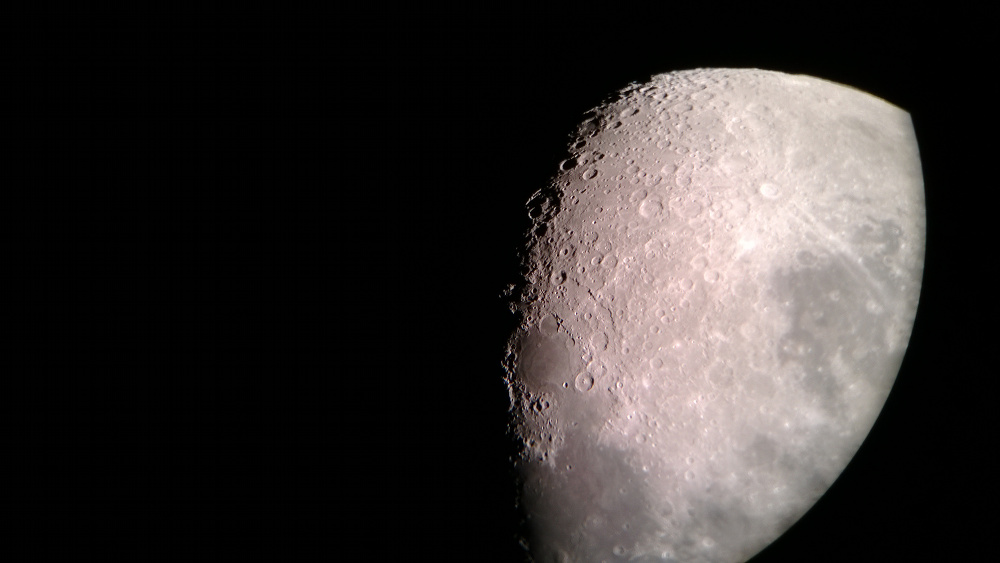 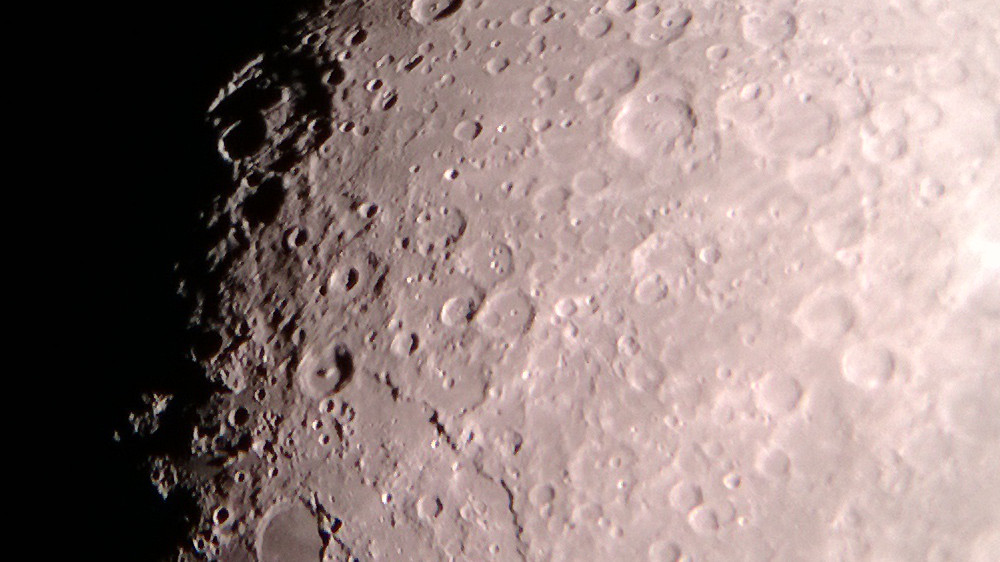 Okay, this set is somewhat cheating as it was taken on a completely different telescope, the Celestron C8-XLT, which has a huge mirror to capture lots more light and a much larger focal length (2032mm), which was giving us x203 magnification too. I've included these as a benchmark of what can be done with a much better telescope. The photos also benefit from the Lumia 925's extra long exposure thanks to its optical image stabilisation (OIS). Note though, that OIS cannot compensate for atmospheric turbulence, which accounts for some of the distortion you may be able to make out.

I admit this wasn't a thoroughly scientific test. Ideally, all the photos would have been taken on the same night, under the same conditions. However, given the time it takes to set up these shots and dependency on clement and stable weather, it simply isn't practical to take the time to test multiple phones on the same night. Therefore, I've been collecting these photos over the the lunar months since mid-summer to now.

For me, the N8 still impresses in the fine detail it managed to capture. However, where it struggled - compared to modern camera phones - is with exposure control and dynamic range. It was difficult to capture all aspects (light and dark) at the same time with the limited settings available. Therefore, I shall look (in future) at third party camera apps that might extend the capabilities of this still impressive smartphone camera.

Filed: Home > Features > Astrophotography with the Nokia N8 and Lumia 925