It's chess all the way, perhaps the archetypal game on any computer platform - or in this case on the computer in your pocket - your smartphone. With a multitude of chess options on Windows Phone, I've picked out the best - and, because we don't do things by halves here, then pitted the two best against each other, to find a champion. Note that this is all playing against your phone - I'll cover playing online against other humans ('by post') in a future feature.

Back in the 1980s, I tinkered with the very first chess computers - they were primitive, slow and unambitious. Over the years I've dipped into chess applications on PCs and it's been amazing how far both the AI and, of course, the processing power available to 'think ahead' have come. I'm a decent chess player (I did once take grandmaster John Nunn to about 30 moves and 45 minutes, but that was (ahem) when he was playing a dozen of us at the same time....), but nowhere near the best club players overall, I haven't studied enough. Most of the games here played at, or above my level without needing to take many minutes to think about each move. Unlike my old chess computer from the 80s!

I've deliberately concentrated here on playing chess against your phone - if there's enough interest, I'll do a companion round-up looking at playing chess online on the phone, i.e. against other human players.

Extremely glossy and with a full 3D real-time-rendered board, this is immediately impressive - and, with a wide choice in time options and difficulty levels, hard to beat too, being not afraid to use an attacking style rather than the ultra-defensive techniques found in computer chess. The moves that are being considered are flashed up in red in real time, which is interesting and cool, and my only complaints were that moving pieces wasn't always easy in my chosen view - in order to tap on squares accurately, I sometimes had to rotate the board vertically in order to see it from a more top-down point of view. 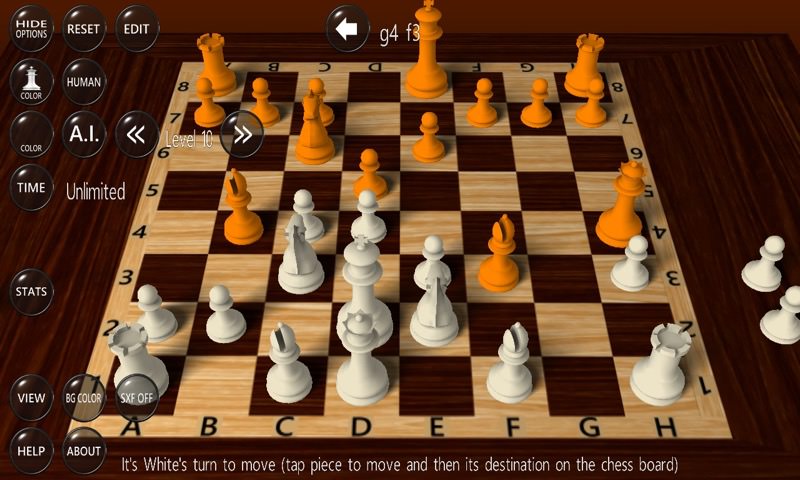 A really nice, pannable 3D board. Note the animated red squares below, when the AI is thinking, the principle moves being explored get highlighted... 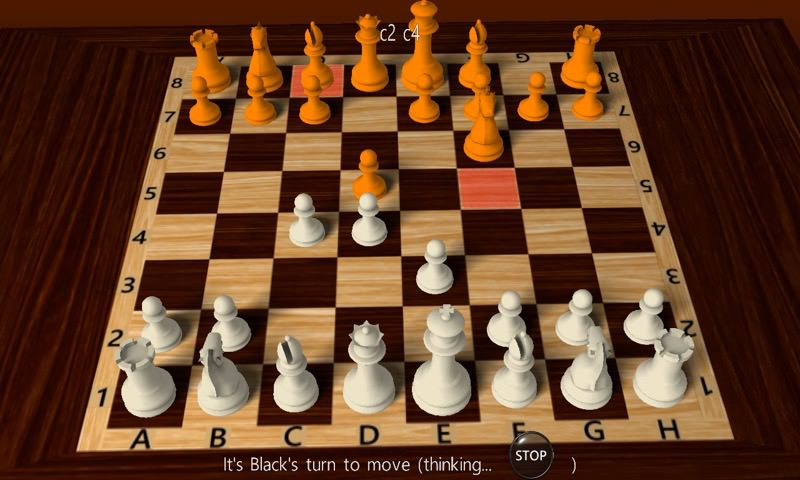 Simply named, only available in free form, and with 'modern' social links and banner ads, this game is nonetheless pretty effective, putting up a good chess performance on a simple 2D board. Half a dozen difficulty levels culminate in 'Master', which equates to up to ten seconds of thinking and is about right for an enjoyable game. 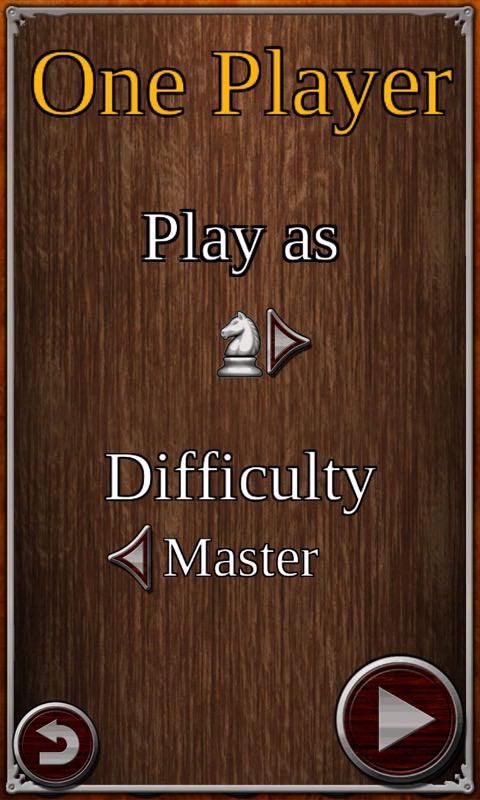 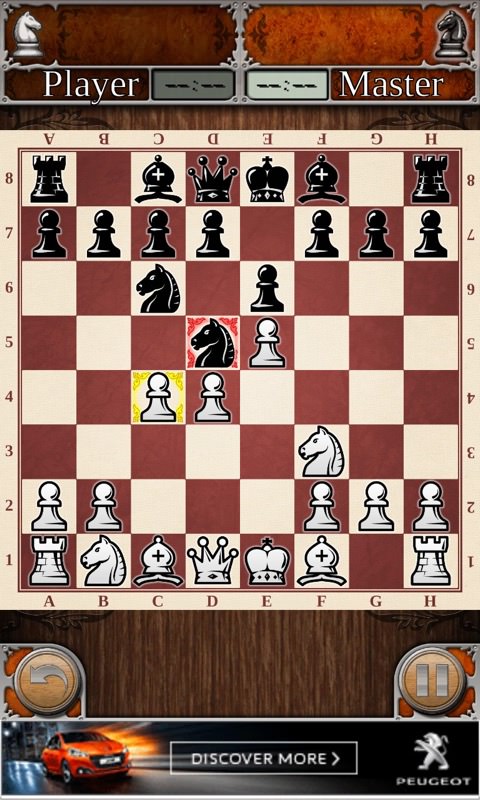 Available in ad-supported or paid forms, and dating back to 2012 and the days of 'Metro'(!), this is still a comprehensive option, including puzzles, teaching aids, online play, and more. The chess engine is pretty good too. As with all the games here, I played it on maximum difficulty and was given a tough time. Never mind the age, this is a top chess application. 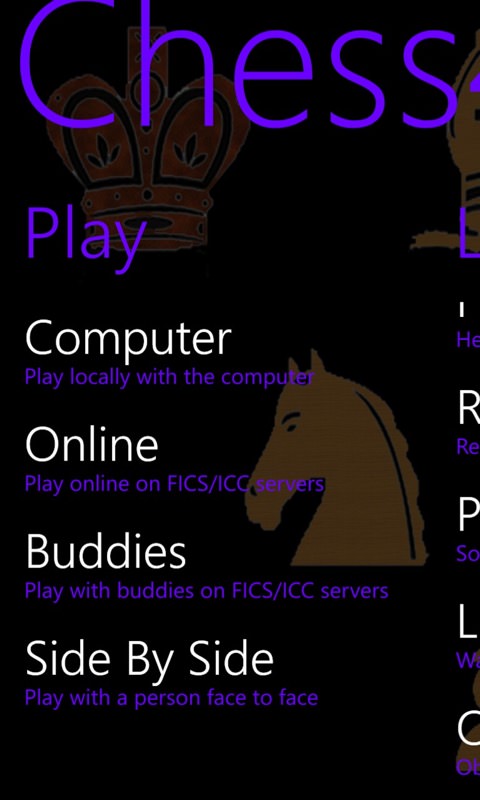 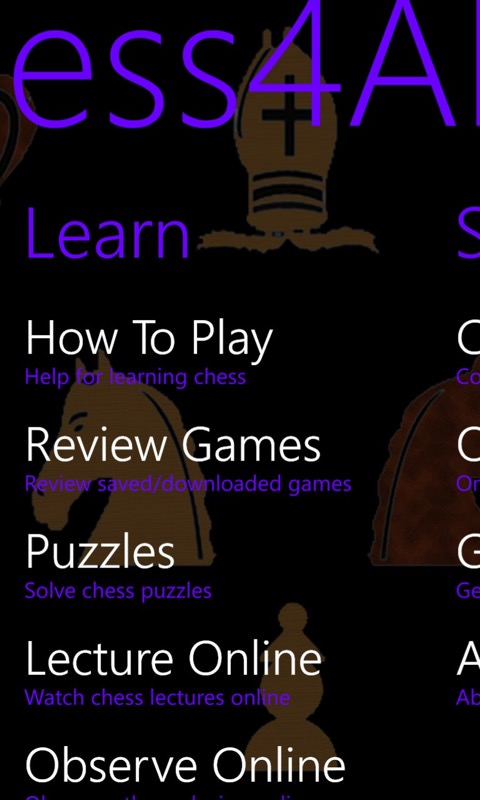 A wide variety of playing and learning options... 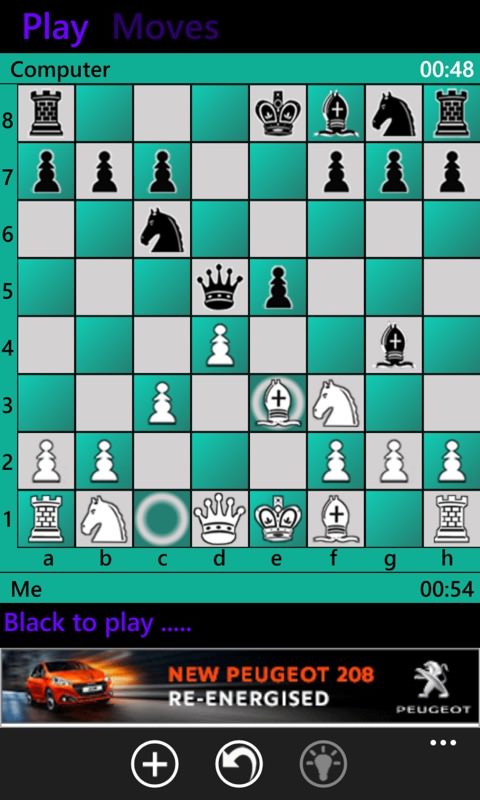 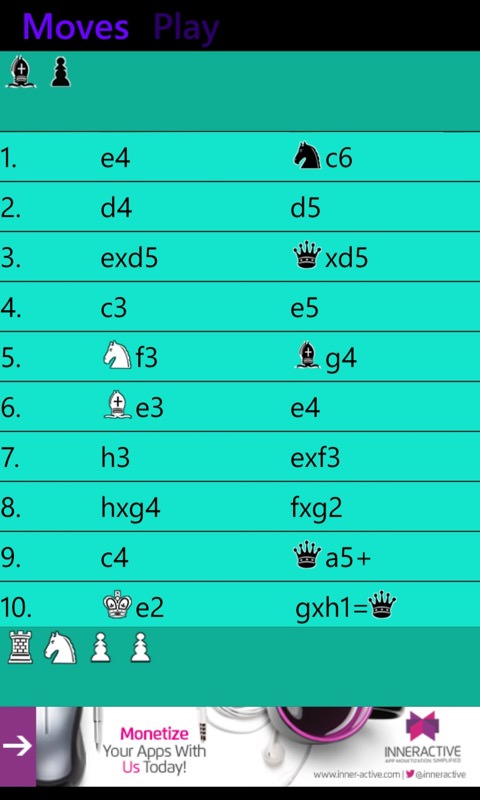 Playing against the AI - it's a clear layout and swiping to one side reveals all the moves etc. 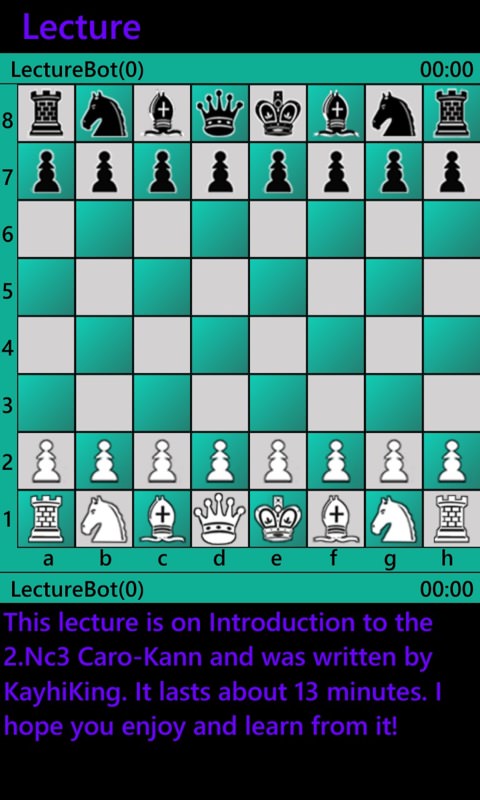 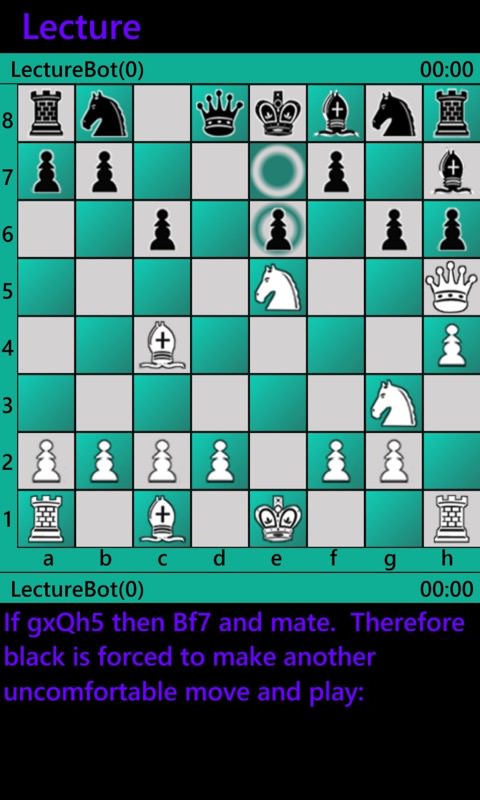 The online lectures are a very neat idea. All pre-programmed, but very informative.

The official title from chess.com and regularly updated, this includes playing against your phone, but at a fairly basic 'quick' level only - there's no configuration to ramp up the difficulty. The bulk of this title is online, so I'll return to it in my follow-up article in the future. 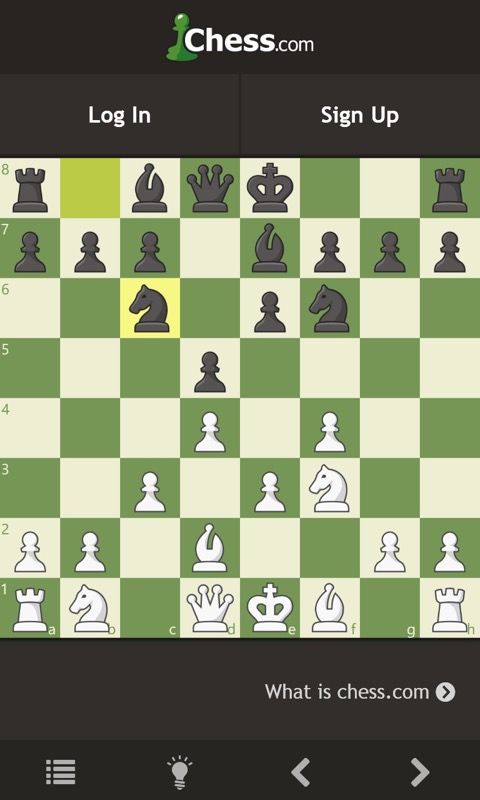 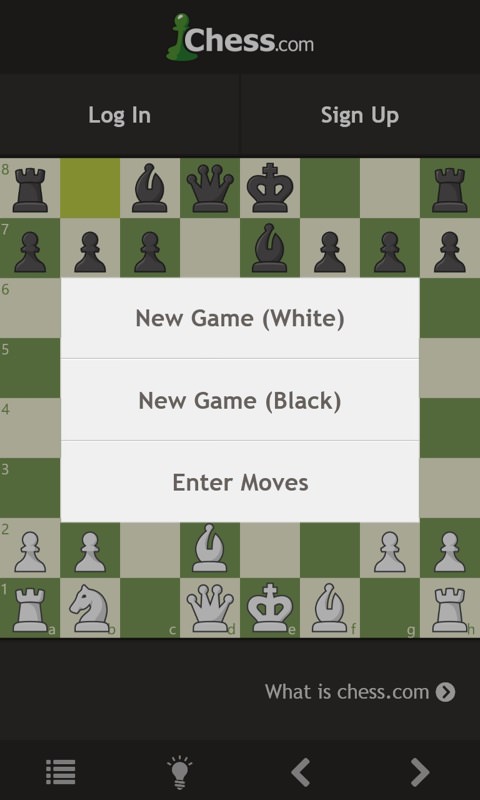 There's no doubting the graphical prowess here, you can pan and zoom the pieces and almost move between them around the board while playing. Not that any of this helps gameplay - even a 'reset view' control can't make up for there being so much texture that it's often hard to distinguish pieces from each other. There's a choice of difficulty levels but they don't go as high, in terms of real world expertise, as some of the other games here. Online options add more, but again, that's for a future feature. 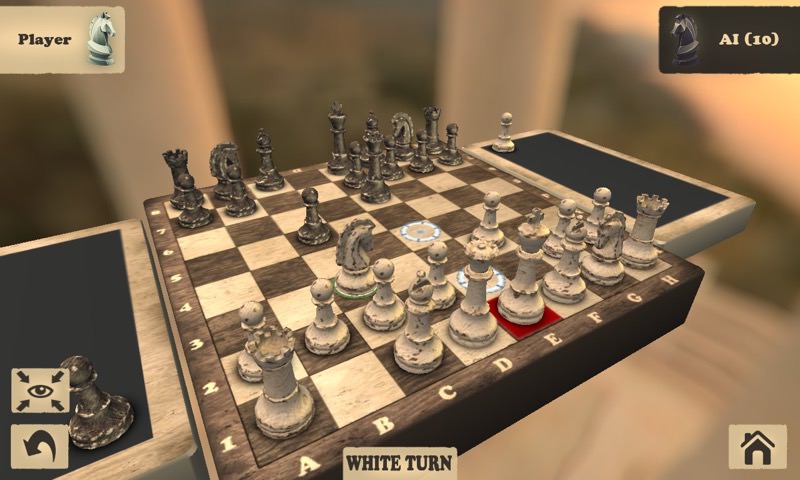 Another full pan and spin environment. In fact, look how close you can get:(!) 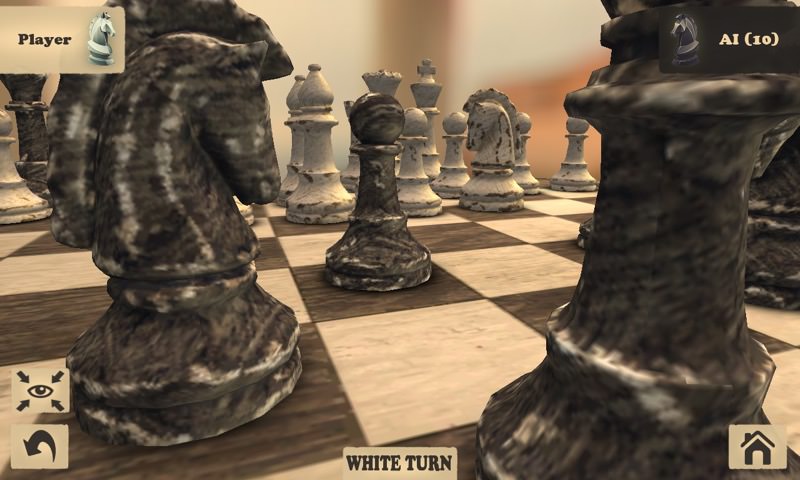 Available in ad-supported or paid form again, this is perhaps the premier opponent on all mobile platforms, the developer having been involved in chess AI for decades. It's tremendously configurable and the single best feature is that at any point the 'best line of thinking' of the AI is shown, complete with what it thinks your response might be. Not only giving you a hint as to what to perhaps do next but also giving you a valuable heads-up and - effectively - more thinking time. 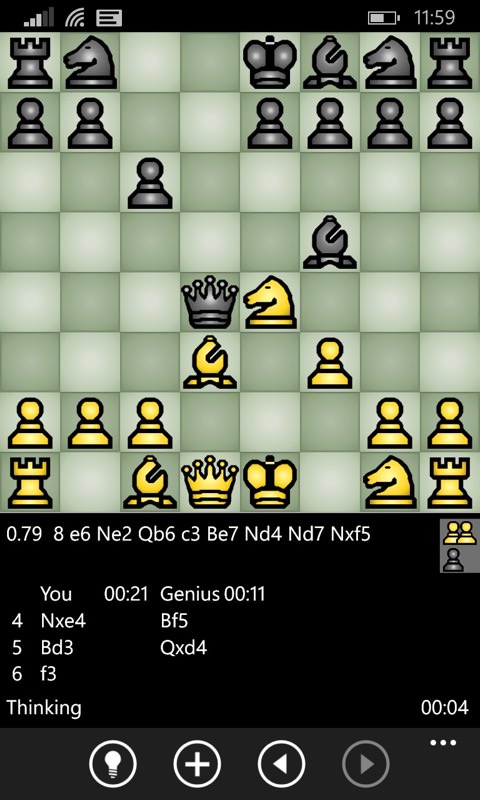 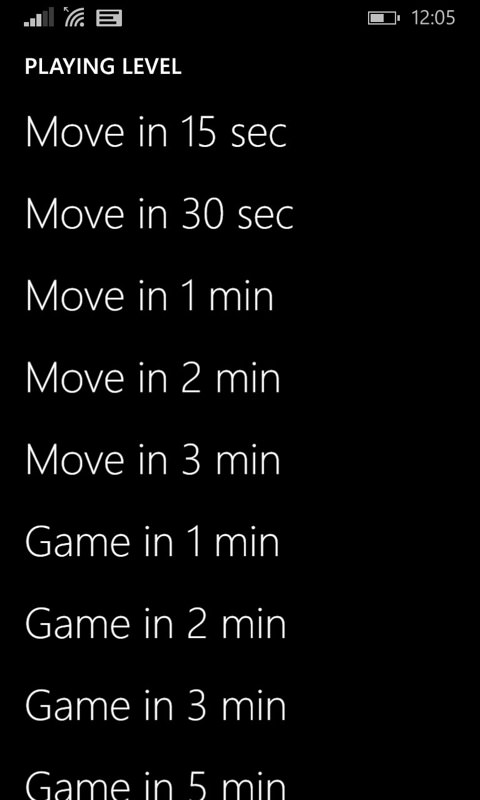 Yes, there are other chess games in the Store, but I think I've covered the main ones, at least in terms of 'local' (on your phone) play. Picking two to play each other in real time, head to head, is trickier. ChessGenius is a slam-dunk, of course, I can't ignore its pedigree. But most of the other titles seem of similar standard. If Chess4All had been kept up to date then this would have been my pick, but I'm going to plump for 3D Chess Game Free'. Partly because this too also 'shows its workings', but also because, being graphically very pretty it's perhaps the polar opposite of ChessGenius. But how will its engine stand up against Richard Lang's creation?

As it turns out, pretty well. To get the two games playing each other, I used the facility in ChessGenius to play as 'black' and thus entered the moves from one game into the other - for the next 30 minutes!

I set 3D Chess Game Free to level 14 and ChessGenius to 'Move in 30 seconds' - my aim was to get the two chess engines calculating moves for roughly the same amount of time. I also used two different Windows Phones, which I suppose adds another small element of randomness, but I've already proved (albeit in a graphical context) that the Snapdragon 400-based phones run at a roughly equivalent speed in terms of processing to the older S4, so Lumia 640 XL vs Lumia 1020 should still be a pretty fair fight.

And so it proved. With two AI engines at work, neither of which were likely to make an obvious mistake, the game proved tactical and rather slow, with no attacking leaps (as would happen if a human player left a weakness) - 3D Chess Game did remarkably well through the opening and mid-game, I was in fact resigned to having to declare a draw. But as soon as the positions became more about tactics and less about raw 'what happens if X then Y then Z', then Chess Genius drew ahead, with a vastly better handling of the end game. 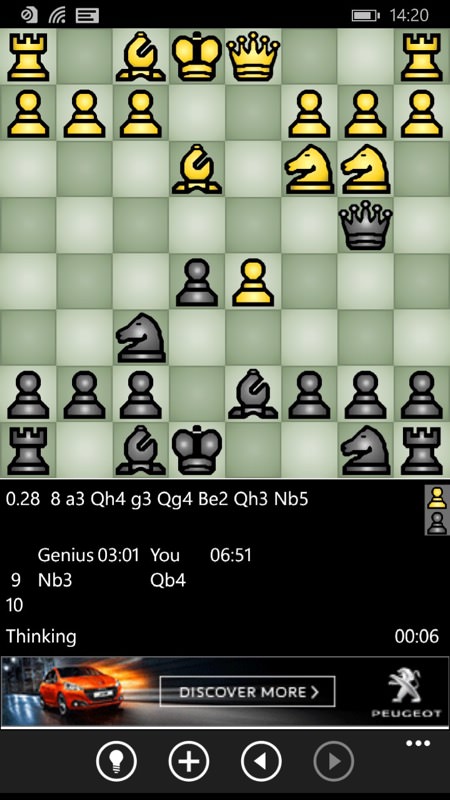 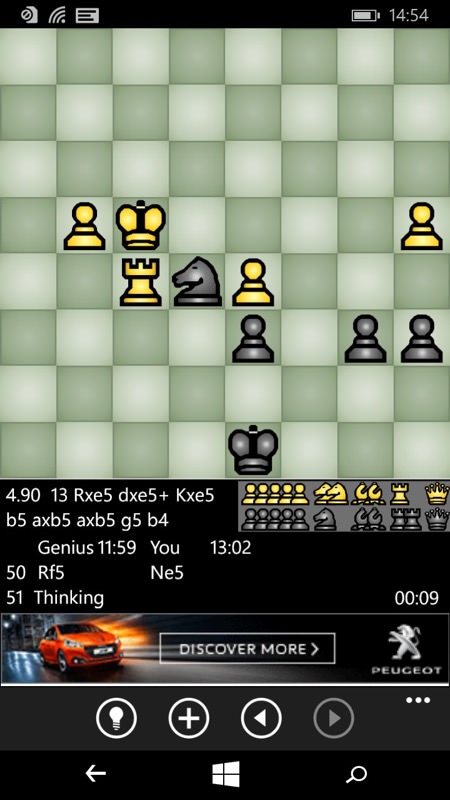 Heading into the midgame after a slightly odd opening (odd to see that black queen so mobile so quickly) - and nearing the end of the game (black is ultimately vulnerable to that passed pawn of white's - but it could have its own by pushing the knight pawn forward etc. - somehow 3D Chess Game missed this, which is unforgiveable!)

Picking an overall winner isn't hard - ChessGenius still rules the roost in terms of raw playing ability in all phases of the game, plus it has a very clear interface and is supremely flexible. Grab the ad-supported version if you want to try and then support the developer with the paid version - the cost is utterly trivial compared to the hundreds of hours of mental battles you'll enjoy.

Mind you, I was also pleasantly surprised overall by the strength of most of the other contenders here - as they're all either free or available in a free, ad-supported form, just follow the links and knock yourself out!