How to give your Lumia a larger screen

No, not a veiled reference to Continuum, and quite possibly an insultingly trivial 'how to' for most people reading this, but it's surprising how many people forget that the virtual controls on modern Windows Phones and Windows 10 Mobile devices aren't fixed in stone - they can be swiped away to give greater space for accessing information, whether it's a web page, a Twitter timeline or even to see more of a game.

I honestly thought that every Windows Phone 8.1 (on the likes of the Lumia 640, etc.) and Windows 10 Mobile (550, 950, etc.) user knew about this, but a timely reminder came from a developer I bumped into recently (who will remain nameless to spare his blushes!). On seeing me complain that quite a few Windows 10 Mobile third party applications didn't support the dismissing of virtual controls, he seemed genunely taken aback when presented with me demonstrating the feature working. "I didn't know you could do that!"

Now, I don't want to labour the point about one developer not appreciating one of the UI features of WP 8.1/W10M, but I did want to remind everyone that this feature exists - and it's pretty unique, since on most Android phones any virtual controls are basically there to stay unless explicitly disabled by the application (e.g. when watching movies). With Windows, you get the choice.

Of course, by dismissing the virtual controls to get more display space, you've then got to bring them back once you're done with the application, in order to navigate back or to the Start screen, but it's a worthwhile tradeoff a lot of the time, especially in information-heavy panes, such as when showing twitter timelines or lists of emails.

So (and apologies if this is teaching a granny to suck eggs), to get rid of the virtual controls in (compatible) Windows Phone 8.1 and Windows 10 Mobile devices, you swipe up from the very bottom of the display (i.e. from beneath the physical start of the touchscreen). Yes, swiping up to get rid of the controls downwards is counter-intuitive, but it does mean that the exact same gesture, i.e. swipe up, can be used to bring the controls back again, at which point it makes total sense. 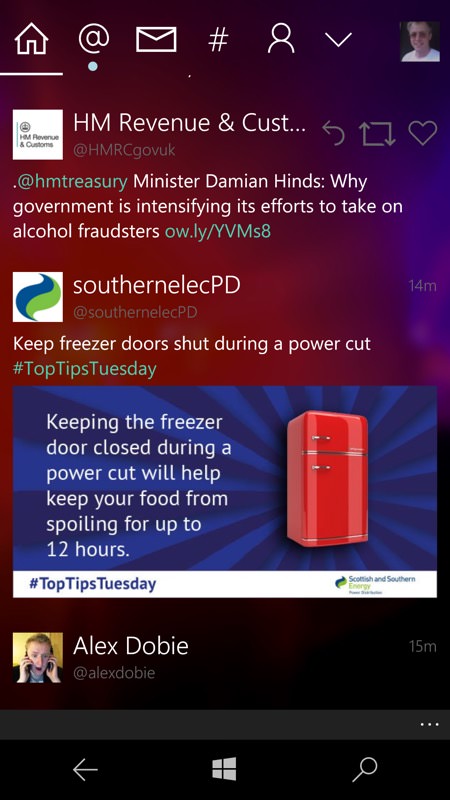 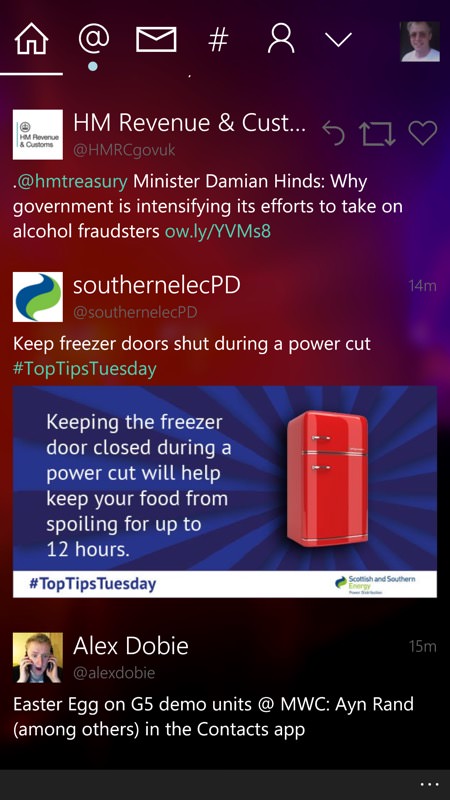 Dismissing the virtual controls here gives the essence of a whole extra tweet in Tweetium...

Part of the reason why a lot of people either don't know about this virtual controls feature (or have forgotten about it) is that it's not represented at ALL in the Windows Phone/Windows 10 Mobile Settings hierarchy. In fact, the only mention of the feature is when swiping away the controls the very first time, whereupon there's a message confirming what you're doing and offering not to comment on it from that time forwards. You'd have thought that there would be a toggle in Settings somwehere, perhaps turning the feature on and off, perhaps to save a new user from dismissing the controls accidentally and then being stuck?

Regardless, I use the dismissal of the virtual controls every day, mainly in Tweetium, Edge and Outlook, but also in certain games and when watching videos. Any time you need a bigger screen, swipe up from the bottom (or, if in landscape, the right) and see what happens.

The uncertainty in the paragraph above is intentional. You see, the dismissal of virtual controls is app-dependent. It works in all the built-in applications, of course. Universal applications are generally pretty aware of the feature and they disappear, while older Silverlight applications are less likely to behave properly, but there are no hard and fast rules - ultimately it's down to each developer to include the relevant line of code to detect the dismissal and then to redraw the screen as necessary. 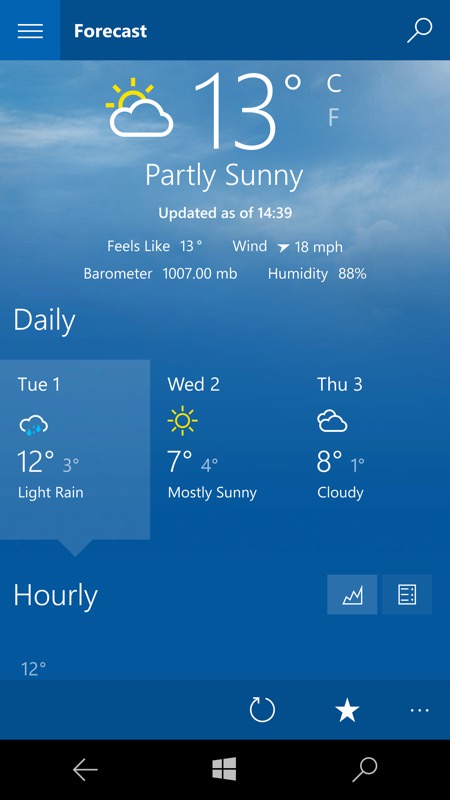 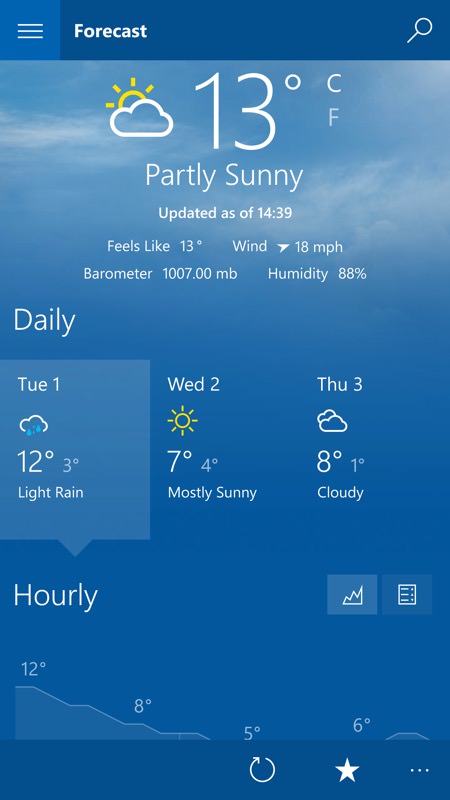 Dismissing the controls here with a swipe brings up most of the temperature curve for the current day in Windows Weather in Windows 10 Mobile...

It's certainly a way to 'one up' any iPhone or Android-owning friends though. Demo an app and then say 'Hang on, let me make the screen bigger' and then add an extra 0.2" in one swipe. Chances are that they'll feel a twinge of annoyance that their phone displays are so fixed. (Well, it's a small victory in the 'my phone can run these apps' war that Windows Phone and W10M usually lose!)

Filed: Home > Features > How to give your Lumia a larger screen