Anatomy of a Lumia photo #1: Horses in the Mist

In the first part of an occasional series on AAWP, I'd like to look at a photo I've snapped on a Lumia, in this case the 950 XL, and talk about how I shot it and the thoughts that went through my head at the time. If you've ever wondered if your own smartphone photography could improve then hopefully this mini series will help you start thinking along the right lines.

Let's start with the finished result, you can grab the original from OneDrive here:

Comparing to taking them in the first place, I'm rubbish at titling photos, mind you. "Horses in mist at sunrise" would be my starting point!

This photo above (at web resolution) is 6MP or ro if you grab the original. There are numerous reasons why I'm so pleased with it - the horses make an interesting focal point and subject, the way the mist gradually obscures the horizon, plus the creative use of the sun. But let's break the shot down in terms of what went through my head a few days ago - I certainly hadn't planned to take any photos.

I woke up (at my dad's place, bordering on country fields) to find that the sun had been up about half an hour and the view out of the upstairs window showed a very misty start to the day. Nothing too special in terms of lighting, but I kept an eye on the sun's progress at burning through the mist: 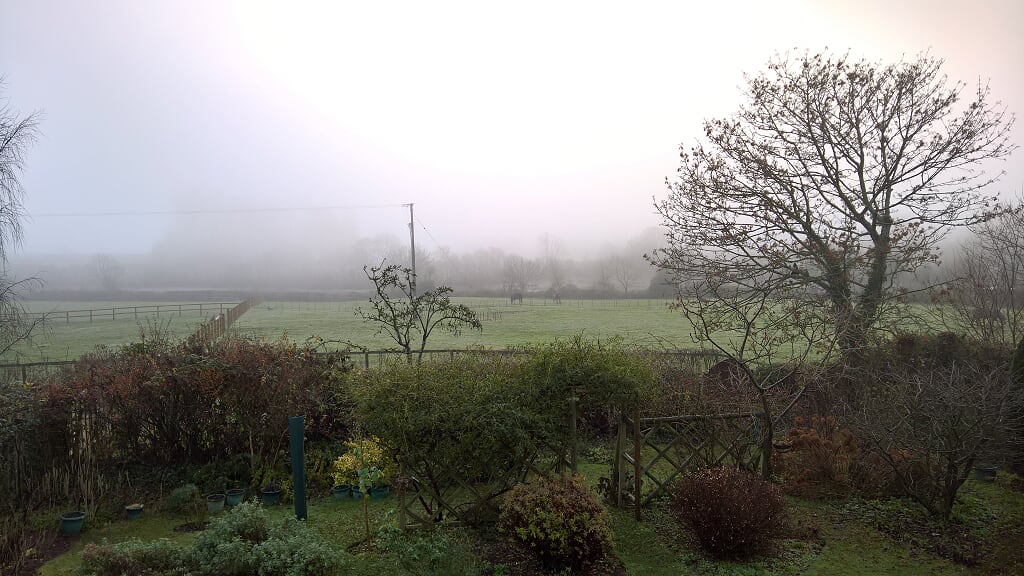 Now, light is the biggest element in any photograph, whatever the subject and whether you're going for monochrome or colour. Light is what makes photography happen and it's what makes photographs interesting. And it helps enormously if you have a camera which has a decent dynamic range, to try and capture this light without blowing out part of the short or making other parts of the image too dark.

The Lumia 950 XL here has an excellent dynamic range, plus (as usual) I keep it set to the PureView oversampled 8MP resolution, meaning that even when light levels aren't perfect you still get almost zero noise or artefacts.

The horses in the distance had already caught my eye - I did wonder if they'd come closer, but there was also the risk that they'd wander further away. I put on my shoes and wandered into the garden: 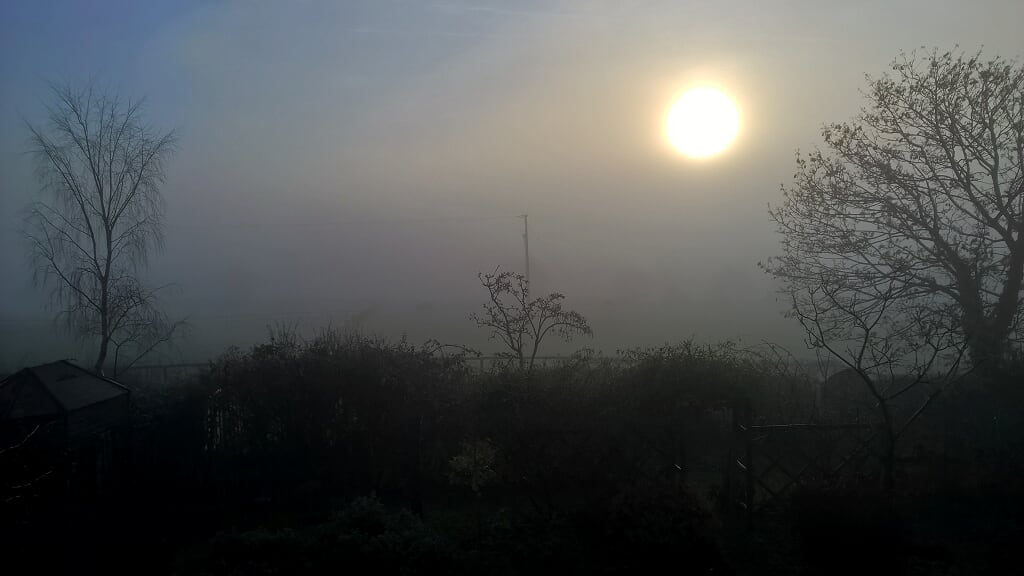 It's not often that there's enough mist in the air to be able to shoot a photo with the sun this high in the sky - the light was certainly getting very interesting - the next challenge was thinking about positioning and framing.

Moving beyond the internal hedges to the edge of my dad's garden, I was quite lucky that the horses were still in position and that the sun was still mainly dimmed by the mist. By shooting over the peripheral fence, I was able to eliminate any closeup framing items (these sometimes help, but not for the shot I had in mind).

Most of all, I was struck by the other worldliness of the winter sun projecting shadows behind every tuft of grass in the large field. Seizing the moment when your eyes see something special is perfect for a camera phone, i.e. it's always with you. And, even if you think that maybe the shot will be better if you wait a few minutes, make sure you take one 'now' anyway, just in case it all goes pear shaped. (In my case, after a minute, one of the horses turned round, backside first, which would have made for a much less elegant and attractive photo.) 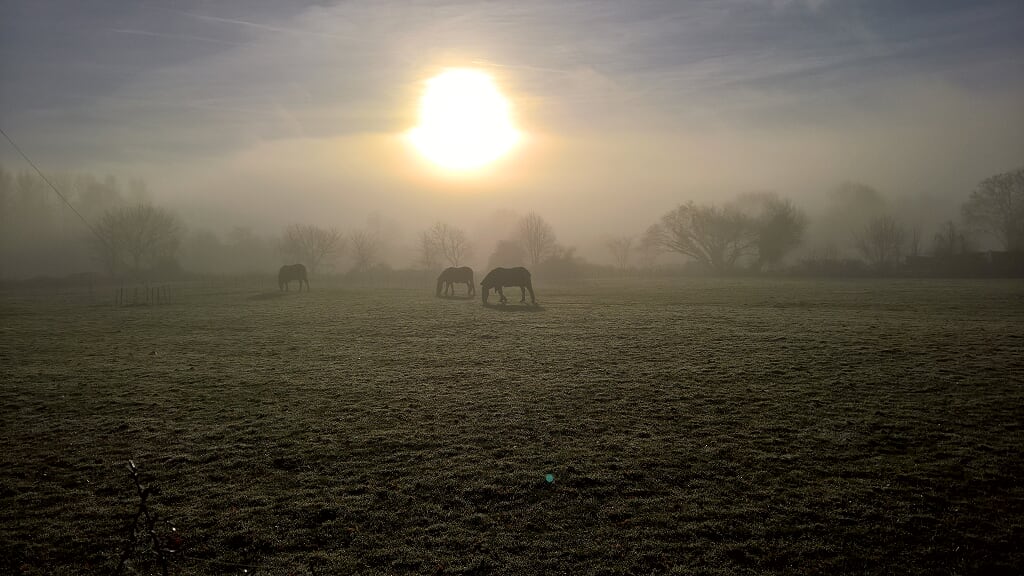 I was shooting in the Lumia 950 XL's default auto-HDR mode, but the bracketed HDR wasn't triggered, i.e. the shot above was a single exposure and with no processing or effects. Yes, the sun was starting to be a little over-exposed and you could no longer see its disc, but I rather liked the glow.

Getting the exposure 'right' here is subjective, since it depends on what effect you're going for in the final photograph - I remember tapping on the horses to set focus and exposure (I didn't want focus to be taken from a patch of field in the near middle ground or from the trees) and the exposure turned out perfectly. A warmer but darker effect could have been achieved by tapping in the (lighter) sky to set the exposure lower.

Retreating to the warm house(!), I was very pleased by the result, with the exception of the intrusion of some twigs bottom left and, more annoyingly, the telltale spot of light near the bottom centre, an internal reflection of the sun within the Lumia 950 XL camera - unsurprising given where I was pointing it!

However, there's so much field in the bottom half of the frame that I felt I had plenty of leeway to judiciously crop the photo on the phone to remove the bottom 25%. In addition to removing the twigs and reflection, this had the extra benefit of helping my composition conform to the famous photography 'rule of thirds', whereby if you centre your subject in every way then it doesn't look anywhere near as arty as if it's one third of the way across the frame, either vertically or horizontally. In this case, the removal of the bottom quarter of the frame (in the standard Lumia Photos/Edit function) placed the horses roughly one third the way up from the bottom.

The cropping to about 2.5:1 aspect ratio also has another positive effect - the image automatically looks more 'cinematic', almost 'panoramic'. I appreciate that a lot of this is subjective, but I've had lots of positive feedback on this photo, so reckon I made the right decisions.

The Lumia 950 XL camera performed impeccably, of course. Even at 8MP (original), look at all the detail in the trees, back in the mist.

I'll have more 'anatomy of a Lumia photo' examples in the future if there's enough positive interest here.

Filed: Home > Features > Anatomy of a Lumia photo #1: Horses in the Mist