How to: Clear storage space on Windows 10 Mobile

It was something of a rude shock when my Lumia 950 XL popped up that it was 'low on storage space' - I hadn't put any video or music on the huge 32GB internal disk, so where had all the Gigabytes gone? Documenting my investigation turned into this 'how to' feature, here are things to try if you too run out of space in your Windows 10 Mobile phone.

In my case, I went from almost no space free to over 10GB free, a result I was very happy with. Not all the steps are obvious to non-geeks though, hence this feature! 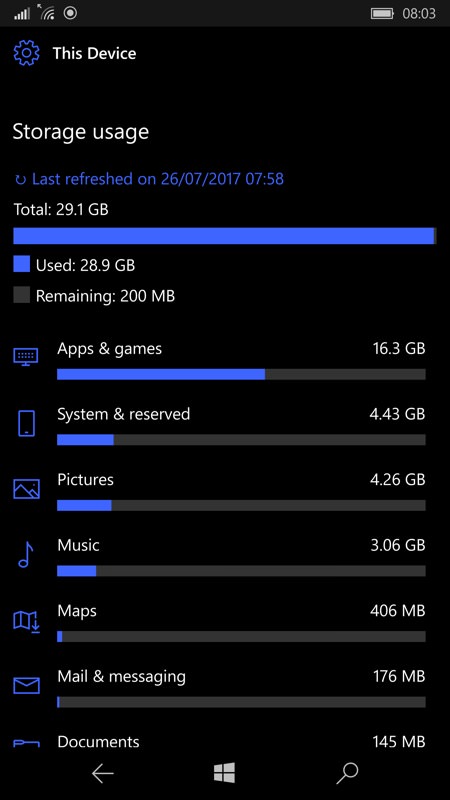 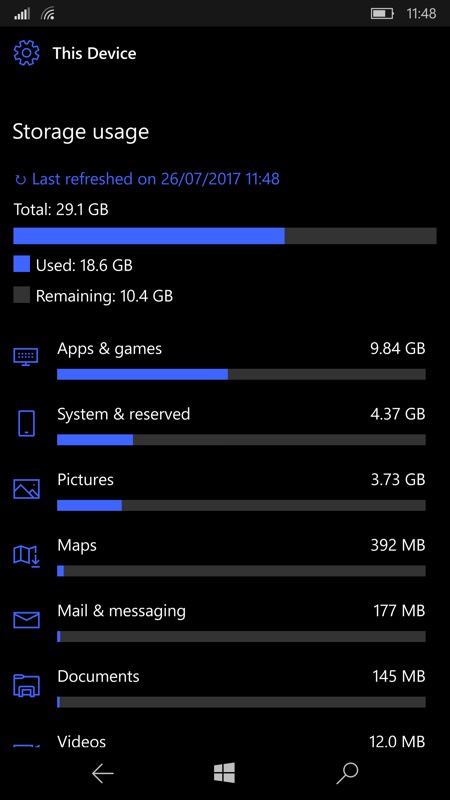 From Settings/System/Storage, the problem - and the solution in place - from 0.2GB free to 10.4GB free! Read on for the detail...

Note the 'last refreshed' line near the top. The way to force a refresh (e.g. after fiddling, below) is to tap on this line in the UI! 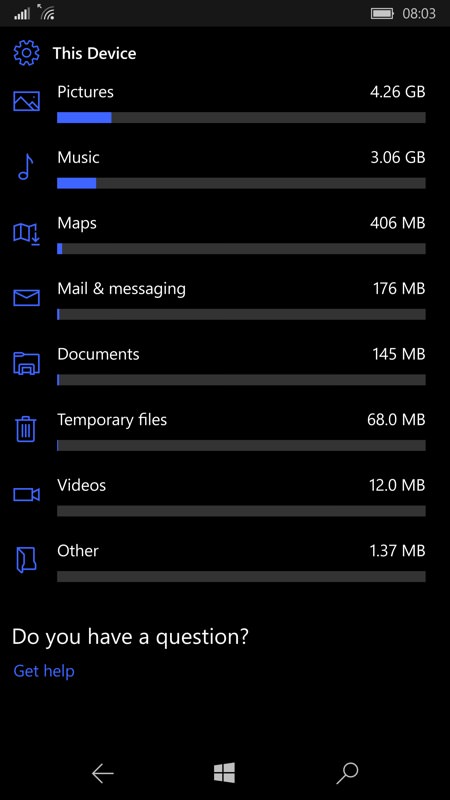 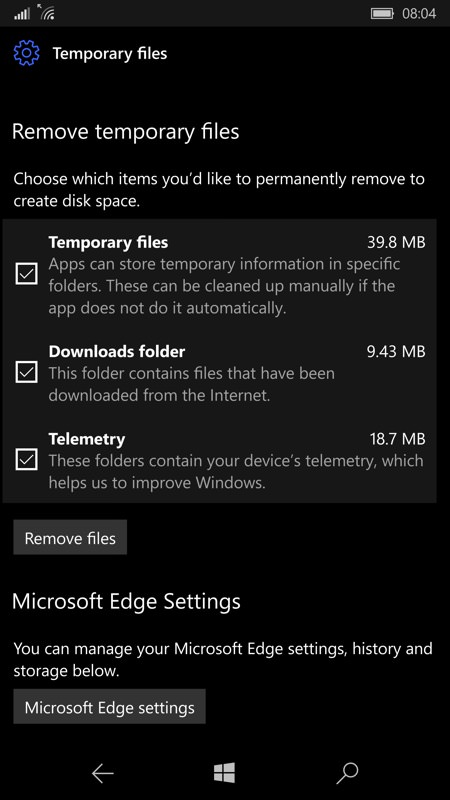 Zapping any temporary files and downloads is always a good place to start, even though it clearly wasn't hogging much space on my phone. Tap on 'Temporary files' and then tick all three options and then on 'Remove files'. 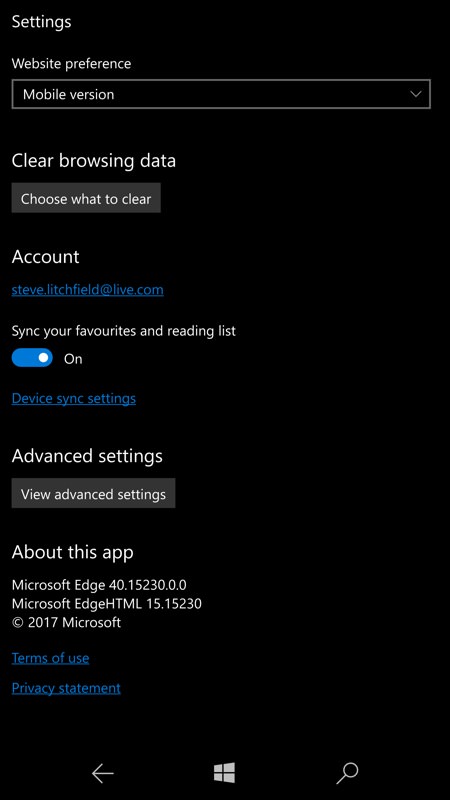 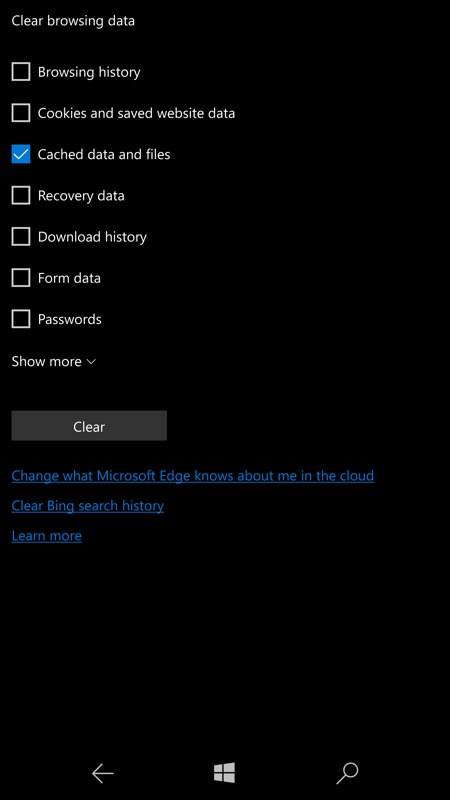 Next up is clearing the cache in the Edge web browser. Head into its Settings (on the '...' menu) and then into 'Clear browsing data' and tap on 'Choose what to clear'. The only one you want to tick is 'Cached data and files'. This only saved a few hundred MB in my case, but it all helps... 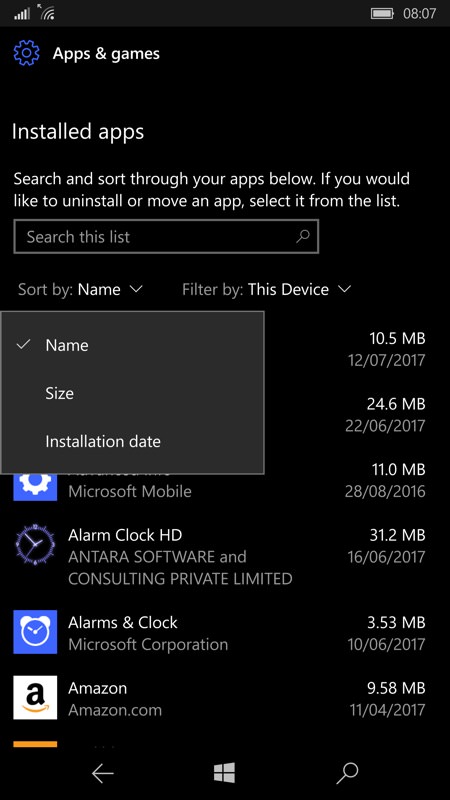 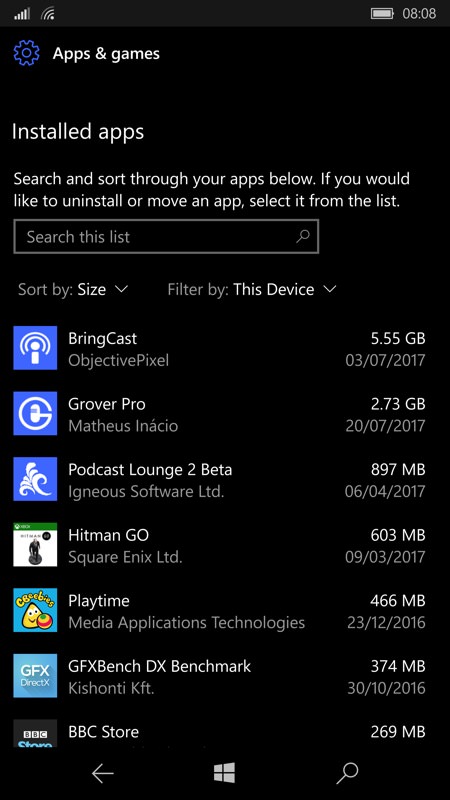 Back to Settings/System/Storage and tap on 'Apps & Games', then tap to set 'Sort by' 'Size', as shown here. The biggest space hogging culprits will be at the top of the list, of course. In this case, Bringcast, a podcatcher, which had been stockpiling shows because I'd been using Grover Pro instead. Oops. 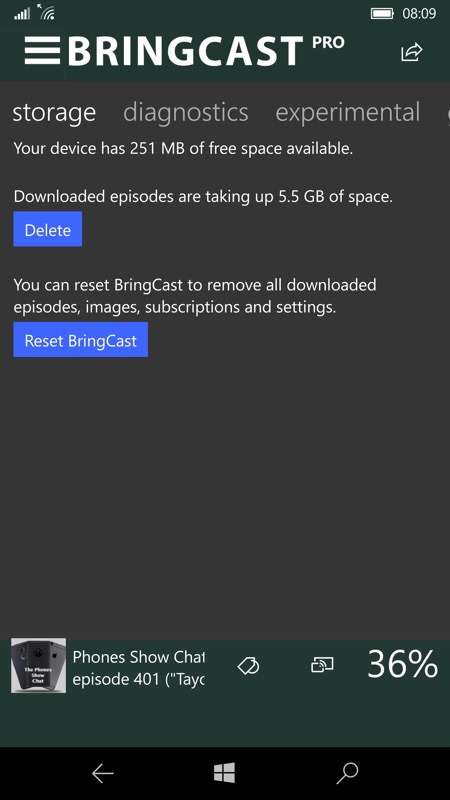 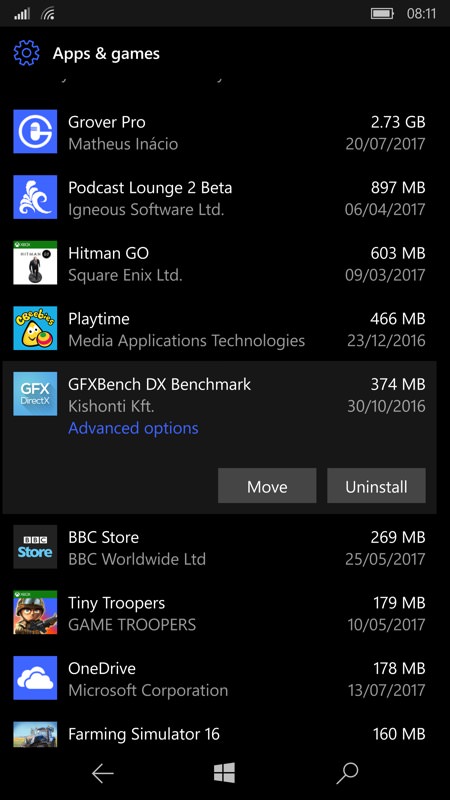 The cure, of course, in my case, was to dive into the culprit app, BringCast, and manually clear its podcast storage. Phew! (right) Next up is to look at other entries in that sorted application list, now's a great time to 'Uninstall' anything that you've stopped using (or playing). 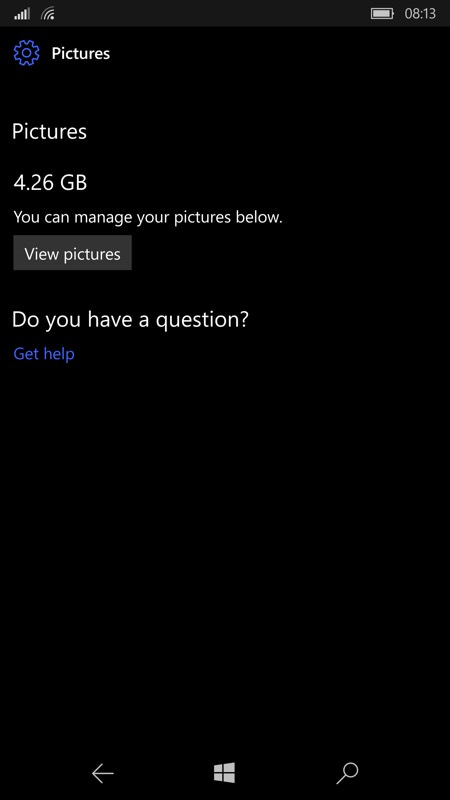 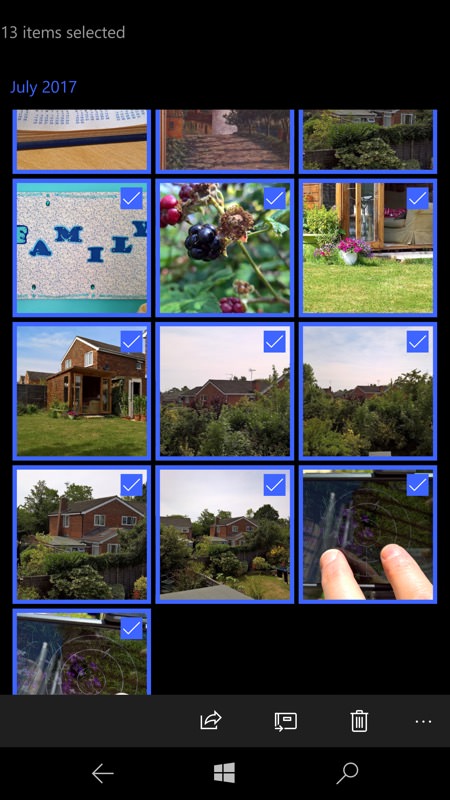 We're getting there. Next, tap on 'Pictures' from that Storage screen - or just dive into Windows 10 Photos manually - and start clearing up. Most people, especially me, are terrible at removing 'gash' photos as I go, life's always too busy. So heading in here to have a good sort through is usually overdue. Long press on a photo to start selecting and then scroll through and tag other shots that you didn't need, and then on the trash can control at the bottom. 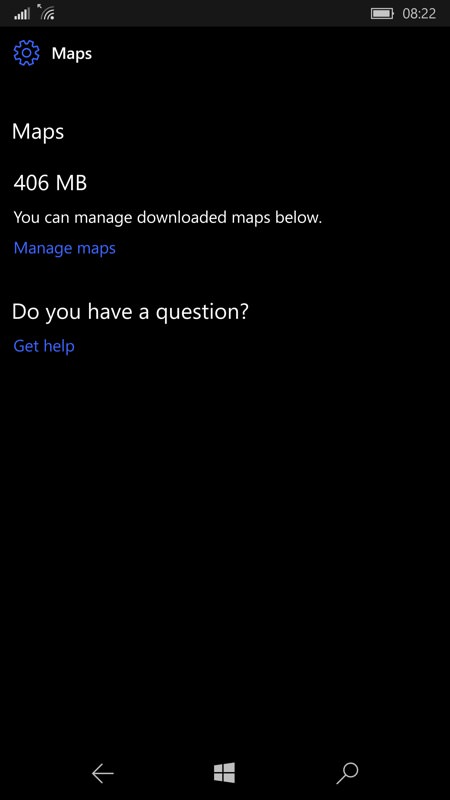 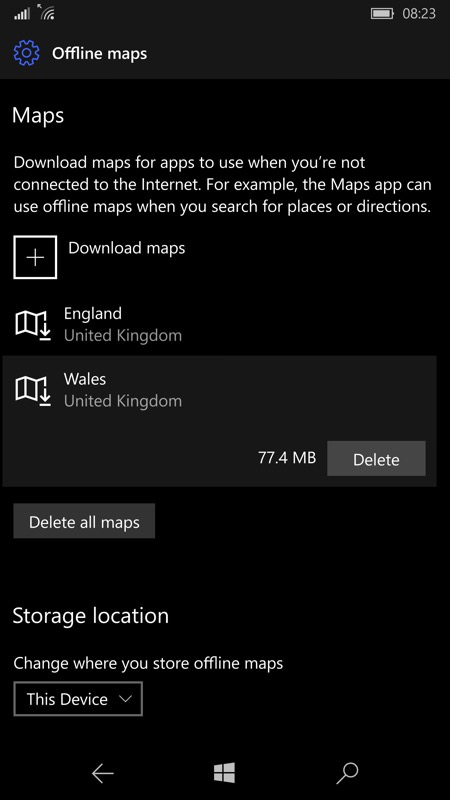 Next up is Maps, tap through from the Storage screen or from Windows 10 Maps (head into the '...' menu and then 'Settings') - if you have any offline maps that aren't needed (in my case 'Wales', after a recent trip) then tap on them and then on 'Delete'. 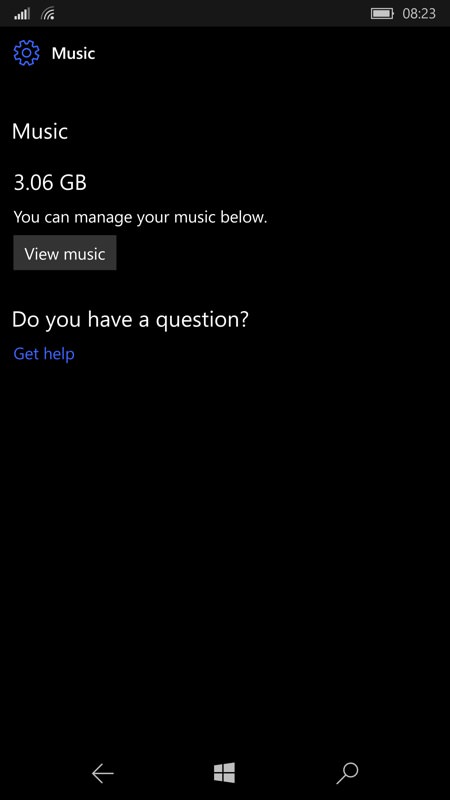 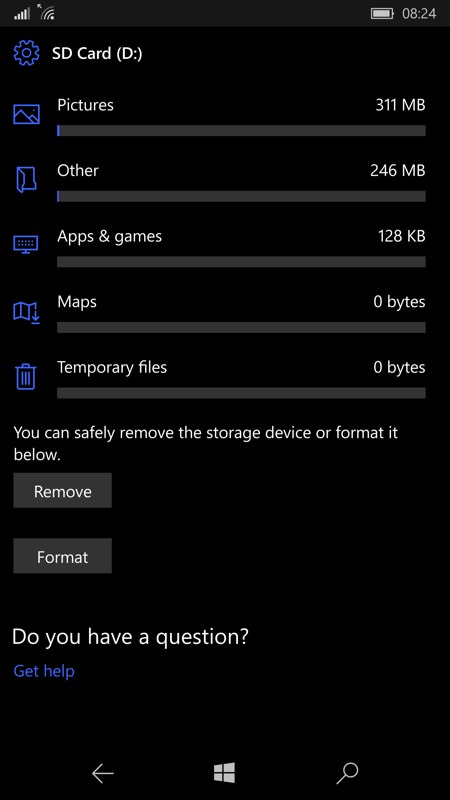 Music was showing as 3GB on my phone even though I knew that all my music was on my SD card, which was puzzling. The first step was to remove the card, so head back into Storage and then tap on the SD card and swipe to the bottom of its read out and tap on (safely) 'Remove'. Then physically eject if from the phone, to make absolutely sure that its contents aren't being counted! Strictly speaking, you don't need to go this, but hey, I was just solving a mystery! 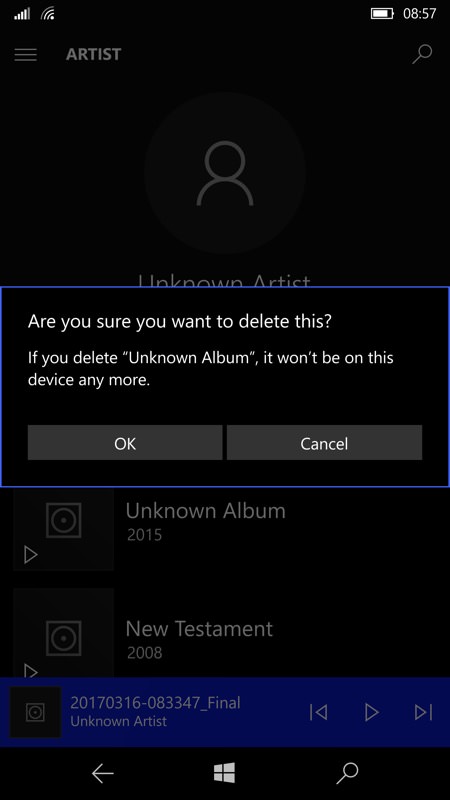 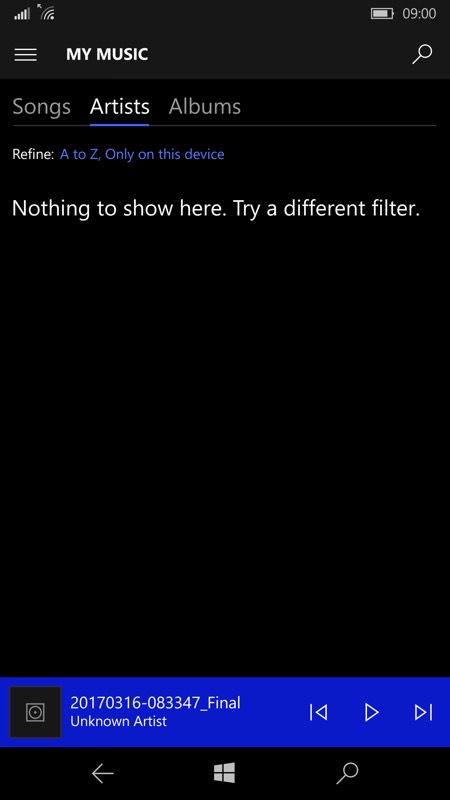 After a few minutes (the background process in Windows 10 can take up to 20 minutes to 'notice' the absence of the card and remove the associated music, so now is a good moment to take a break and have a drink or snack!), I was left with a few miscellaneous recorded WAV files and some audio books - these are easy to delete from the Windows 10 Groove Music interface. 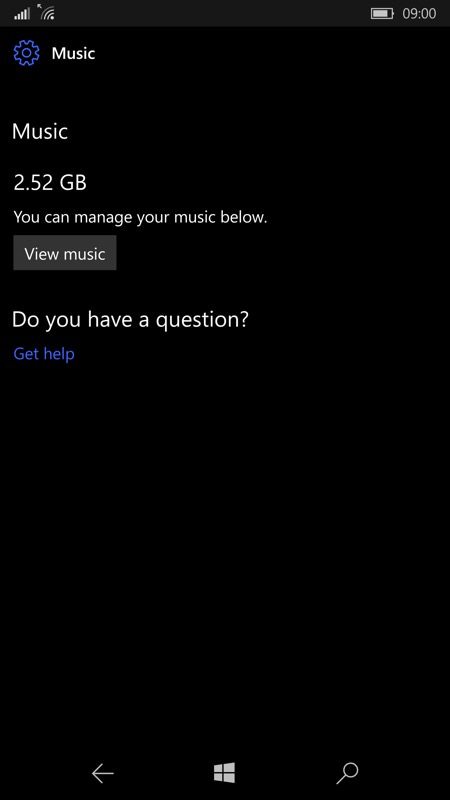 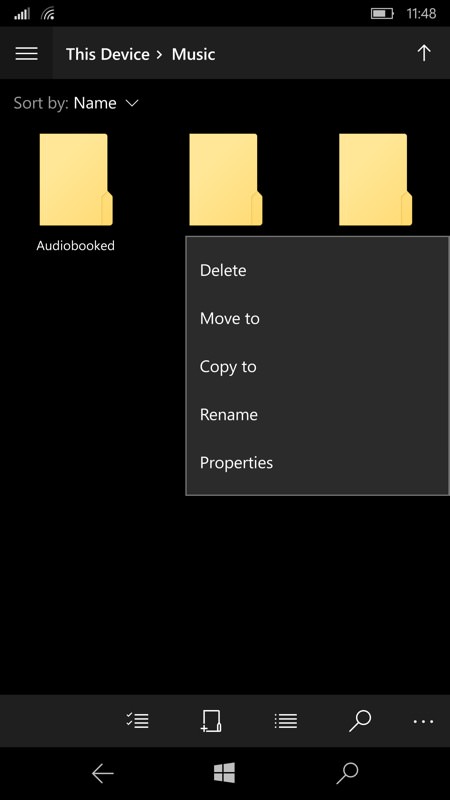 Yet Music was still showing as taking up 2.5GB on my phone. It turns out that Windows 10 counts podcasts grabbed with the Microsoft first party 'Podcasts' app as music! Who knew?! Checking in Podcasts (which isn't installed by default these days as it's a Windows Phone 8.1 legacy app) showed some activity, but the fastest way to clear everything is just to 'Delete' the entire Podcasts folder in Windows 10 Files, as shown above right.

Heck, you probably use a much better podcatcher now anyway, so you can also 'Uninstall' Podcasts. And if you do decide to go back to Microsoft's old 'Podcasts' app then your set-up will sync back through your Microsoft account, so you can't lose anything. After this operation (and after tapping to refresh the Storage summary), 'Music' showed '0 bytes', as it should.

PS. Don't forget to re-insert your SD card, if applicable!

I gained a third of my device's entire internal disk back and my Lumia 950 XL is set for many more months of productive use. Hopefully all of this is useful to you too, and might save the day when you or a friend/relative hit the same issue and need to clear space from the inside of (e.g.) a Lumia in a hurry!