Last week I pitched the new Huawei P40 Pro against the classic Lumia 950 XL, spec for spec, and concluded that it's not a terrible shout as a Lumia replacement as long as you're not heavily into Google services. In this feature I wanted to show in screenshot form how this might work, with all your Microsoft and Windows favourites front and centre. What are the highlights and what caveats remain? And you might even feel at home with way you have to drop back to doing things in a browser - just like old times for Windows phone fans, eh? 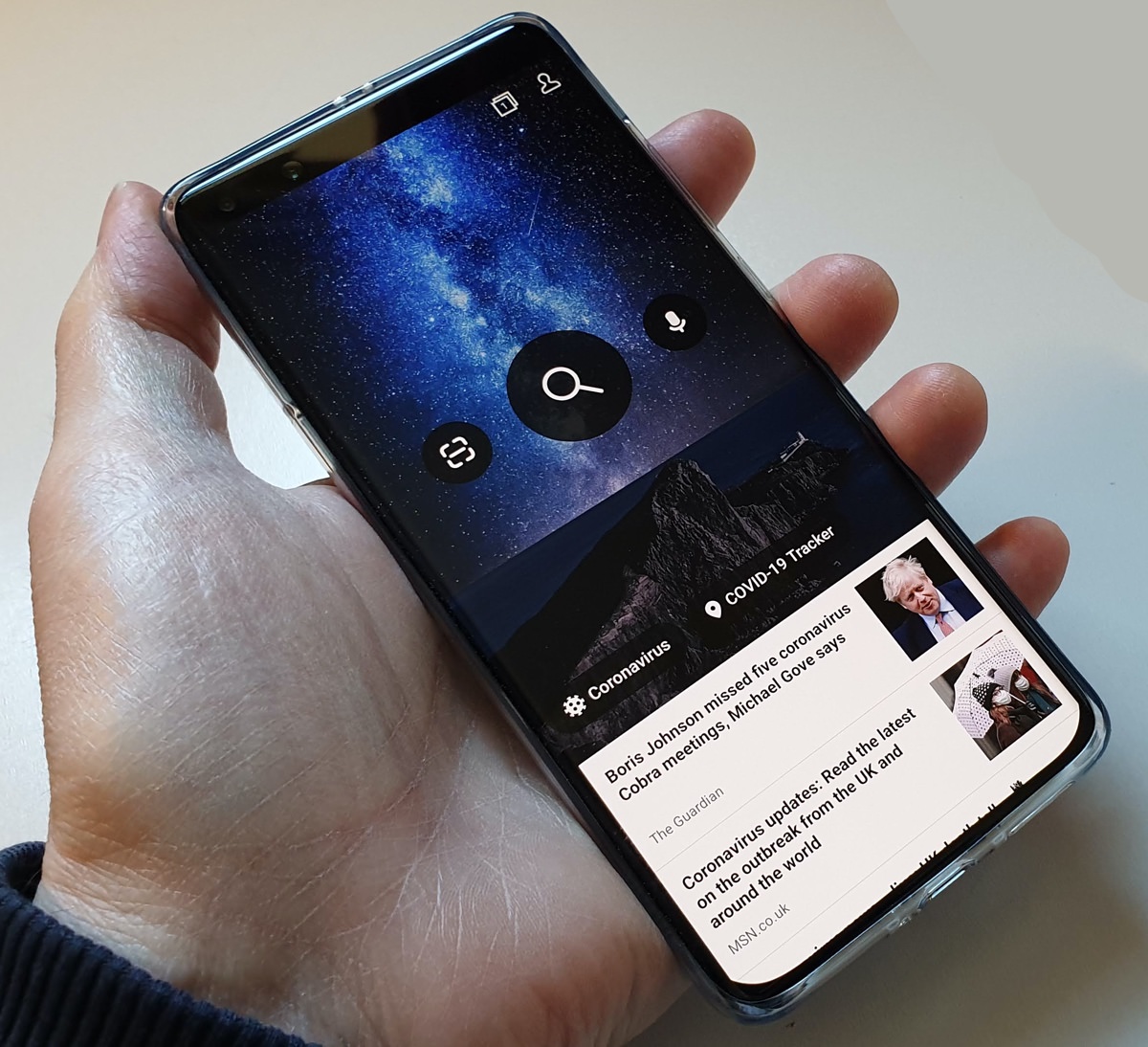 The P40 Pro (in clear TPU case), with Bing Search (built-in from the factory) up and ready...

The idea then is to find a modern, supported smartphone with a camera that rivals or beats the classic Lumia 950 (here's my P40 Pro vs 950 Xl shootout), since imaging is why many people stuck with Lumias for so long in the first place (and here's my Lumia 1020/P40 Pro imaging comparison). And getting all the Microsoft services and applications that many have depended on for years would be a given.

Happily, the latter is easy for any iOS or Android smartphone in 2020, and happily the camera set-up on the P40 Pro is up to the task of ensuring plenty of snapping fun, especially with high zoom factors, for anyone brought up on the Lumia 1020 and 950. Slightly worryingly, the USA-China trade war has meant that Huawei had to create this phone with zero Google services, so is essentially taking Android Open Source Project code and adding its EMUI interface and Huawei applications. Then adding its own App Gallery store.

Microsoft Office is baked in from the start and Bing is pre-installed for searching the Internet, so we're off to a good start. Some of the extra Microsoft applications are in the Huawei App Gallery, then you need to also install the APKPure (or similar) Store to get everything else. APKPure is a straight download in the browser, but after that things are more traditional. And through this store you get OneDrive, OneNote, Skype, and more.

One thing you don't easily get is Microsoft Launcher (or the Preview version) - I did try installing each of these from the APKPure Store but ran into implementation issues when setting these up, some clash with Huawei's EMUI, it seems. Note that this might change as the two companies work together further and as Microsoft Launcher evolves. So for the purposes of my tests here I was using Huawei's launcher, which works pretty well on the whole.

Here in the default launcher, with many of the Microsoft services and applications installed, either out of the box via App Gallery or via APKPure. Note OneDrive, Office, Bing, OneNote, Outlook, Skype and (of course) Edge, plus Microsoft Translator.

Outlook's Calendar in action and working fine on the P40 Pro. You choose between Mail and Calendar views on the bottom tabs, of course.

Google (or Windows) Maps are a no go here, so here's (pun intended) HERE WeGo (with road names blurred for lockdown privacy reasons!), which is very similar to HERE Maps/Drive, which is what Windows Phone started off with, and whose maps Windows 10 Mobile still uses. So the interface and feature set here is extremely familiar. And it's all free, even the offline maps and voice-assisted navigation!

HERE WeGo includes live traffic (again all for free) and speed camera alerts. A tremendous resource for the P40 Pro (and other Google-less Android smartphones) in particular.

OneDrive is as useful as ever. I know a fair few Google users who use OneDrive for all their photo auto-backups because of the 1TB that you get with Office 365 (which many have to have for work reasons anyway). Here's the Photos view on the P40 Pro, anyway.

...and OneDrive's general Files and folders view. I suspect there probably is a Huawei Drive equivalent, but it's not obvious, so OneDrive is the way to go for all transfer and backup purposes.

Netflix is installable from APKPure and seems to work very well, plus the gorgeous P40 Pro AMOLED screen helps here.

YouTube, being a Google property, is harder, and yet it's a service that all of us need at some point. There are a variety of YouTube clients of varying vintage and quality, but it's easy enough to just use the YouTube web site in Edge, as here. It works just fine and you can then sign in to Google just within this environment if you need your subscriptions, history, and favourites.

YouTube in action, mid-frame. Just proving it does work full-screen in Edge anyway (though 16:9 content can't be 'stretched' or cropped to fit, so you usually get black bars either side, as here)

Banking applications are a no-go in the West, of course. Even if any of the app stores had the banking application APK files, would you trust your finances to a side-loaded app that might have been tinkered with? Even assuming the application would load and log in in the first place? The answer's 'No', of course, so it's back to what Lumia owners have been doing for years - using the Edge browser and each bank's web site. Do-able, but not that convenient.

But away from things that are either excellent or at least possible, and away from obvious Google applications (Gmail, Google Drive, Google Maps, etc.) there are a few no-nos:

In many ways, the situation with the P40 Pro is similar to that Windows phone users have faced for years - a dearth of official applications, missing notifications from some apps, and more things accomplished via a browser. So we're... (ahem) used to all this! There's also the 'still evolving' aspect, in that Huawei is adding applications to its official App Gallery each week, more apps are being coded in there to use Huawei's own services and push notification server. And you get a voice assistant (Celia) that's evolving, Cortana style, from nothing to full functionality throughout 2020.

So even if you don't see the PureView similarities in the P40 Pro imaging system (cough, Eero Salmelin), there's the software situation too. So many parallels and I maintain that, for a Lumia 950 owner, the P40 Pro would be a fun, useful and capable replacement. And, having been wrestling with applications, services and stores for years, you already have the workaround skills!