How to: Sync to-dos and reminders between Windows, Cloud, Android

A few weeks ago, as the latest benefit from its ever closer integration with Microsoft products, Samsung flipped a switch in their 'Reminder' application on their Android 10 (and upwards) smartphones, enabling full sync with Microsoft's To-Do system (Windows 10 Mobile, Desktop, Cloud, inside Outlook, etc.) And it all works, in fact it does so as well as anyone might hope for, and (for AAWP readers) this includes compatibility with 'ye olde' Windows 10 Mobile. Screenshot proof and a walk-through below!

I should preface all of this by saying that, for non-corporate use, I do think that most of the various to-do/tasks/reminder systems across the various platforms are over the top. The sheer number of options in Microsoft's own To-Do product for Windows 10 Mobile and other platforms is mind-boggling. Should you flag/star a new task? Give it a reminder time, add a due date, add it to 'My Day', add some steps, add it to a list? Then, when it comes time to look at what has to be done, do you look in My Day? Under 'Important'? Under 'Tasks'? Or under one of your various lists? In theory, set up right, all these views and aspects come together, but for most of us a single linear list would do, and then perhaps an extra list for some aspect of our lives. Or maybe that's just me.

In any case, there's enough common ground between Samsung Reminder and Microsoft To-Do that they can be easily and successfully linked, subject to the caveat above about reminders/tasks perhaps needing tweaking on the 'other' platform so that they show up in the manner in which you expect.

Starting, for the sake of this example, with the set up on a Samsung flagship - finding the 'Reminder' app in the apps drawer and then you'll now see this prompt as a pop-up. Tap on 'Sync' to get started...

The permissions are quite understandable and sensible, don't worry; (right) the next pop-up is here, offering to save all new reminders from other applications into Microsoft To-Do by default. This is worth doing, though do see the caveat below.

Now, the 'Write a reminder' button looks tempting in the interface, but, despite the 'default' selection previously, this still defaults to 'Reminder', i.e. Samsung Reminder, rather than 'Microsoft To-Do', though there is, in fairness, a pick list at the bottom of the dialog, where you can change this.

However, the point of the default section is that reminders created from anywhere else within Samsung's smartphone interface do get shunted into the Microsoft To-Do system. Here I've asked for a reminder using Samsung's voice assistant, Bixby, and you can see it got saved to 'Microsoft To Do'. Further, in the Reminder app itself, at the bottom of the interface you can see a 'To Do' tab, and tapping this shows the new voice-entered reminder. 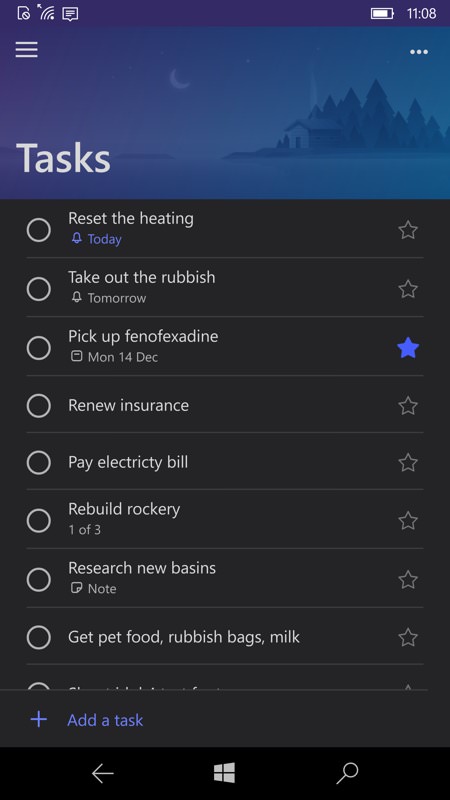 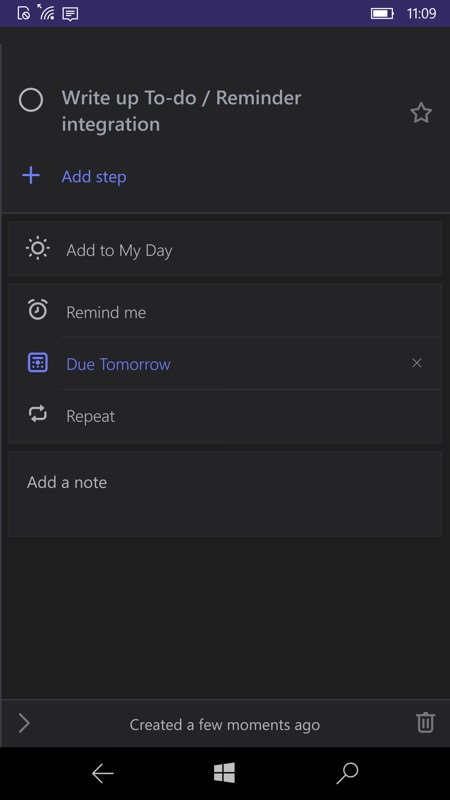 To demonstrate both how cross-platform this is and also to show that Windows 10 Mobile isn't dead just yet(!), here's Microsoft To Do on my Lumia 950 XL. I can see the new tasks/to-dos/reminders (see how complex this is in terms of intent?!) in the main list and I can also add a new To-Do in the Windows 10 Mobile app. 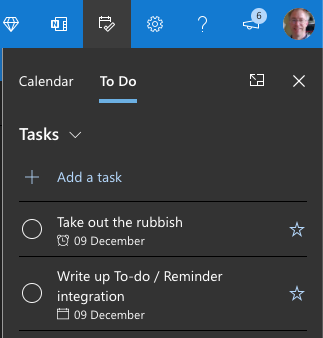 And so the web, as a further demonstration. Within Microsoft's Outlook (also as an app on all platforms, of course), there's a 'My Day' section where you can see your 'to dos', and here are my new tasks from the direct entry and Lumia-entered means (the third one completed while I was writing this piece!)

PS. There's lots more Samsung is doing with Microsoft, of course. I'll be returning to their 'Your Phone' integration system soon, and this offers even more interest and interoperability.

Filed: Home > Features > How to: Sync to-dos and reminders between Windows, Cloud, Android