With Google stepping back from their original vision for Google Photos, year on year, changes are afoot in the phone photo storage world. So I thought a round up of your options in 2021 would be worthwhile. This being cross-posted to AAWP, it's highly appropriate to suggest that Microsoft's OneDrive, as used originally back in Symbian (as 'SkyDrive') and then Windows Phone days, is still perhaps the premium repository for all your photos and videos. But there are alternatives galore...

The idea is much the same in all cases, at least in terms of photos (and usually videos, though they take up much more space). Media is automatically uploaded to the 'cloud' (in your chosen, signed-in service) and then you never have to worry about losing or breaking your phone, since there's always a backup, maintained at some company's expense on a data farm somewhere in the world. Furthermore, having your photos and videos in the cloud means that you can share them to others from the cloud, i.e. without you having re-upload them specially.

Which service(s) you end up using will depend as much on your own history as much as your chosen smartphone ecosystem. Me? I use perhaps the big two (as listed first, below), but also dabble in the others, to check them out!

All-purpose cloud disk drive, with 'special' folders for uploaded photos and videos, and with an overall 'Photos' view across all folders.

The proposition for OneDrive hasn't changed much in years. Every Microsoft user gets 5GB free to start with, but this includes all your documents and other online files, as well as uploaded media, so 5GB isn't much use to all but the most basic phone user. The two options are a) sign up for Microsoft 365 (used to be called Office 365), starting at £60/year, which gives all the Microsoft office applications and utilities, both online and locally installed plus 1TB of OneDrive storage, i.e. 1000GB, which is more than enough for any power user, forever. (Interestingly, when OneDrive was launched, there was no cap for paid-up users, but misuse by some people (tens of Terabytes of commercial movies, etc. caused the 1TB cap to be applied.)

If 1TB and Office seems over the top then a basic 100GB is available for £2/month, though for a complete, full quality photo and video archive, 100GB probably isn't enough. For example, I'm at 200GB used out of my 1TB and that's without backing up videos. So I'm actually paying £5/month (£60 divided by 12!) for that storage and not really using the Office side of things much. Still, if you do use Word, Excel, etc anyway then this is a cracking deal all round.

If you stop paying for OneDrive or Microsoft 365 then the cloud drive can be 'frozen', which can get complicated. Typically you'd have to delete a lot of content to get back within the free limit and that's rarely possible. If you do nothing then eventually all the content will be deleted. So OneDrive ends up being something of a 'service for life'. Which is exactly what Microsoft wants, i.e. annual subscription money coming in(!)

There's also a generic Drive product, akin to OneDrive, but Google has historically separated out media. This is changing, at least in terms of data used.

All photos and videos can be stored in either 'Original' quality or 'High quality' (some resampling - to 16MP max - and transcoding to save space).

Originally all photos and videos were stored at 'original' quality for free, but Google has been ramping down allowances for years as the cost of its server farms has risen(!) and without many people paying for this storage. Until June 2021, you can still upload all your media for 'high quality' storage for access forever, i.e. no number limits, for free. So you have to be quick if you haven't done this, even if just as an extra backup!

After June 2021, all uploads will count towards your standard Google account storage (this varies by user and any offers they might have taken up, the default is 15GB), so in practical terms if you want to use Google Photos as your main archive for new photos and videos then you'd need to pay for the Google One plan, starting at about £1.50 a month for 100GB. See the FAQs here and here.

Note that Google's own (existing, i.e. not going forwards) Pixel phones are exempt from the latest changes and have unlimited 'high quality' storage of photos and videos forever. And note that if you're paying for Google One and have enough storage then you can still toggle on uploading in 'original' quality.

Included with the Prime subscription.

No limits on stills. As many photos as you like, and shared with up to 5 friends or family members, who also get unlimited access, at least to the 'Family Vault' shared area. The catch? You have to stay a Prime member, £70 or so a year - if this lapses then you lose upload rights over 5GB and content over this limit will start being deleted after six months. Video content is limited to 5GB either way. See also FAQ.

All-purpose cloud disk drive, with special 'Camera uploads' folder for auto-uploaded photos and videos (if using a paid plan). You can store media in any folder, but there's no overall 'Photos' view, so things are a bit more DIY than on OneDrive.

Dropbox's basic (free) plan is limited to three devices (so perhaps a desktop, a laptop, and a phone), and has a size cap of just 2GB, designed for a few documents and odds and ends. It's completely impractical to use this with photos and videos. You then have to go to £8/month for 2TB of storage or £14/month for a 'family' plan with up to 6 users.

Intriguingly, there's no auto-deletion of large numbers of files if you stop subscribing to a paid plan. You do lose syncing and can't add to your file/media set, but as it stands right now, you could sign on for £8 (for a month), upload 2TB of media and then cancel - and all of it would stay accessible, for reading, viewing and downloading. Not practical for an active set-up, but worth noting for edge storage use? Of course, Dropbox could change this behaviour at any time...

Dedicated public-facing photo storage and organisation tool. You can keep images private if required, too.

Flickr has been through a number of owners and changes over the years, and is currently owned by SmugMug(!) The tiers are kept very simple, though. The 'free' tier limits photos and videos to 1000 items, total - more than this and you need 'Pro', which is 'limitless' and which works out to about £5/month, with various ways to pay.

A cloud drive but managed by applications - you can't really browse its folders and contents. It should 'just work', to quote Apple. Photos and videos take up space, as do other backups, documents, iMessages and attachments.

If you stop paying then not only can you not add more media, but syncing and backing up of regular content (messaging, contacts, etc.) stops until you're back below 5GB.

So much depends on:

The biggest and most obvious takeaway is that you shouldn't spread yourself too thin in terms of where everything's going. All of the solutions above have their fans (and users) and all will absolutely do the job. But they all, ultimately, cost money to keep going, and there's no point in paying for multiple services when one will do.

Being perhaps slightly picky, other points to perhaps draw from the table are that:

Leaving, as I say, the 'big two' - OneDrive and Google Photos, and a little personal anecdotage. The latter is better value on the face of it, plus there's immense AI at Google's end, in terms of finding lost photos and suggesting match ups. Plus there are no (number of) device limits. However, most user data hs either been uploaded as 'high quality' (i.e. transcoded to save space) or been retro-reduced at some point in the past (Google offers this as a space-saving function). This won't matter for snaps of 'Auntie Maud', but I wouldn't trust 'high quality' mode for my best landscapes and arty shots. In hindsight, we should have insisted on - and paid for - 'original quality' photo uploads and the space for these from the start. But hindsight is a wonderful thing and - for me - Google Photos has served as an all-encompassing 'if all else fails' backup. So everything I ever do that's an image or video makes its way up to Google Photos anyway (at least until June 2021) and then if I can't find something in my primary archive I'll trawl Google Photos and probably find it. Or at least 80% of it, quality-wise! 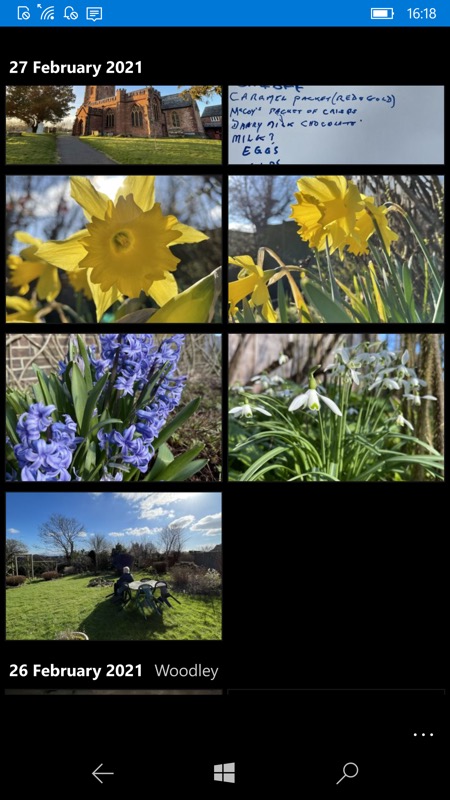 Leaving Microsoft OneDrive. This was the most convenient cross-platform, cross-everything solution back in 2012 (here's a typical story about 'SkyDrive' on Symbian!), then we had OneDrive baked into Windows Phone (and then Windows 10 Mobile) as the default sync solution for just about everything on the platform. So it was a natural backup solution for us at AAWP, not least because it also includes the full Microsoft Office suite in the price (or the other way round, if you prefer, i.e. you buy Office for the year and the 1TB comes 'free'!) Microsoft developed OneDrive early on for iOS and Android too, so, with Google Photos being Android-only at the start, OneDrive was the way to move things to and from the cloud from - quite literally - any piece of tech.

Take away the Office side of things and OneDrive looks competent and universal, if slightly more expensive than the competition. But throw in the software, both used online and locally installable on any PC or Mac you own, and OneDrive becomes something of a bargain. With 1TB as the default capacity cap and with all media uploads being the original files, with no transcoding or lowering in resolution, it's still top of the pile, I contend.

I"m sure there are other media backup services available, but the six above should get you off to a good start in terms of thinking about comparisons and finding the most affordable and future-proof solution for your particular needs.

Your data points and comments welcome though!