A full four years ago I looked at a fledgling UWP Pinterest client for Windows 10 Mobile - and, believe it or not, it's still being updated, with the latest in the last few days. The developers, Chococode, are one of the last active UWP app developers compiling for Windows 10 Mobile, so credit to them. Piny UWP is now £4 if you want to zap the ads, so it's slightly pricier than it was originally, but heck, at this stage in Windows 10 Mobile's existence, it's worth showering active developers in beer, so buying them a pint in this case is money well spent, I contend.

Showing the way, I paid up to remove the ads and support the developer, which helps here as there are no banner ads to litter up my screenshots. After using the in-app purchase, Piny UWP does have to be restarted (close it from the multi-tasking carousel and then restart however you like), but ads are then a thing of the past and there are no distractions from the Pinterest experience.

Although Piny's ads are then gone, it should be noted that Pinterest itself has to raise money. Whether on the desktop or in an app here or on iOS or Android, adverts are sprinkled in your suggestions. I'm guessing that Chococode could filter these out as part of constructing the Windows 10 Mobile experience of Pinterest, but then perhaps that would infringe his use of Pinterest's APIs? In any case, Pinterest's adverts aren't anything every other user is seeing, so it's a typical experience for the social service, whatever you're using it on.

I should mention that, should you detect something of a sci-fi theme in the screens, although I'm still a Pinterest novice, I had been searching resources in modding my 1970's toy Space 1999 Eagle, and Pinterest's suggestions algorithms have done the rest! Of course, as you browse around and 'pin' things to your own boards, the algorithms will widen as needed and your suggestions will be more varied! 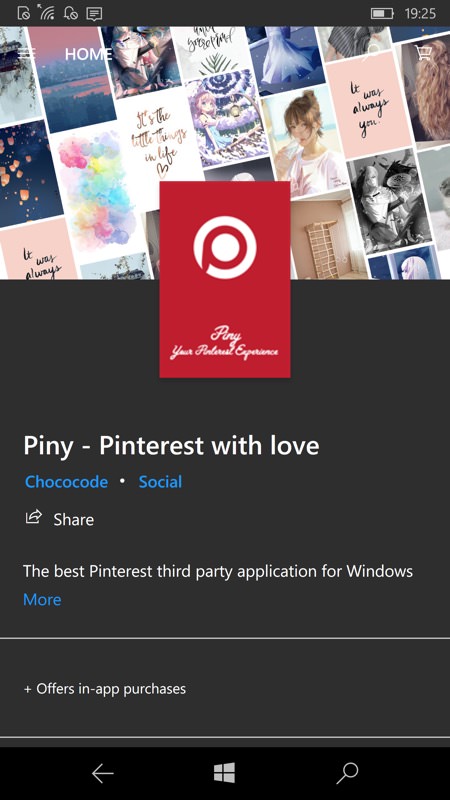 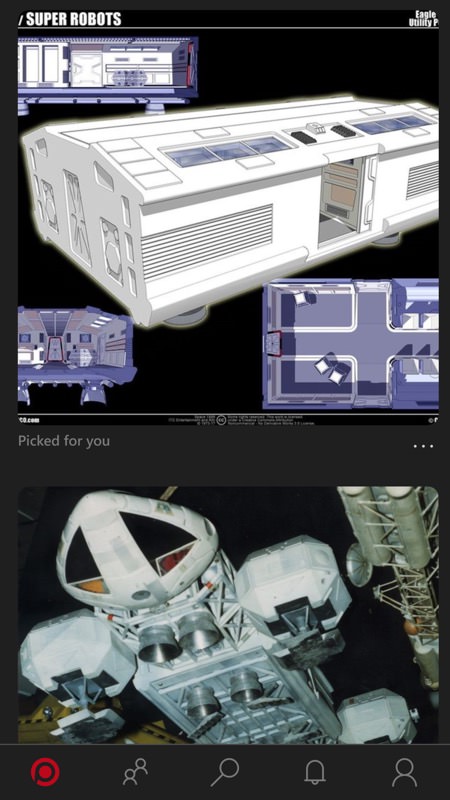 In the Store - you can forgive the self-proclaimed 'best', since it's also the only app for Pinterest! (right) Started up, note the use of large images throughout and minimal screen 'furniture' - just the five elements in the bottom toolbar. 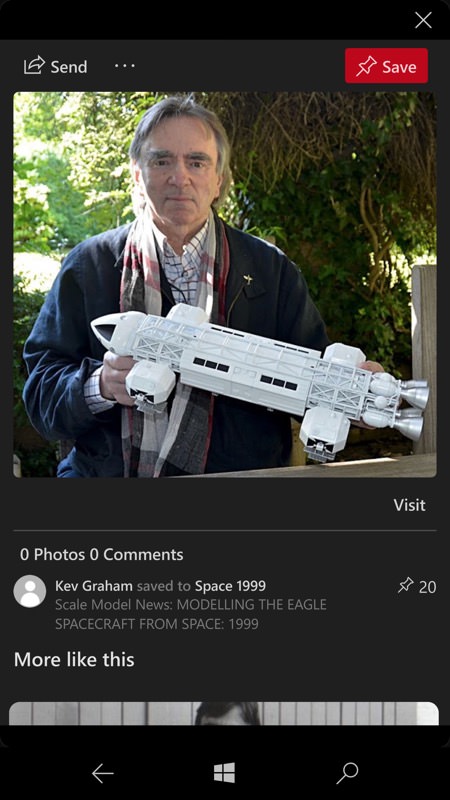 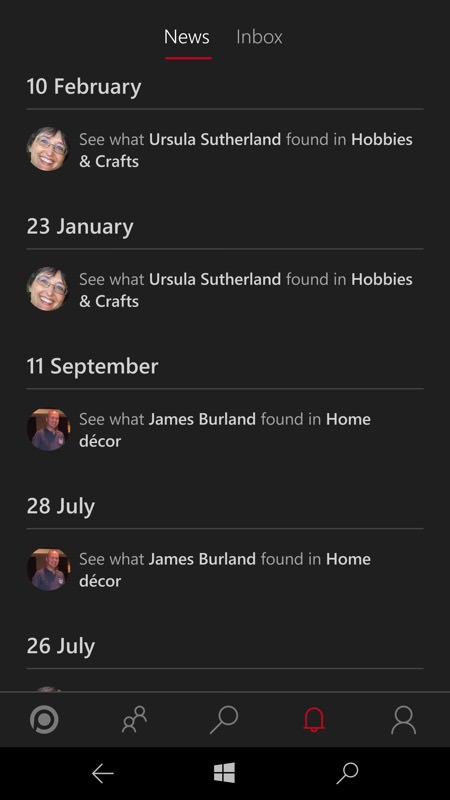 Within a 'pin' and with the option to 'Save/pin' it yourself (for those that are interested, this is Brian Johnson, the man behind the model effects in the series, in 'The Empire Strikes Back', and '2001, A Space Odyssey'); (right) a bare bones News feed, but you can tap through... 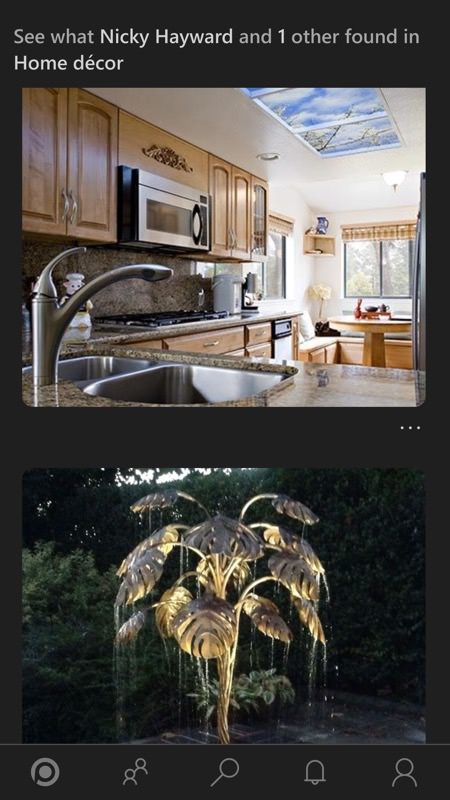 ...to see what your contacts have 'pinned'. 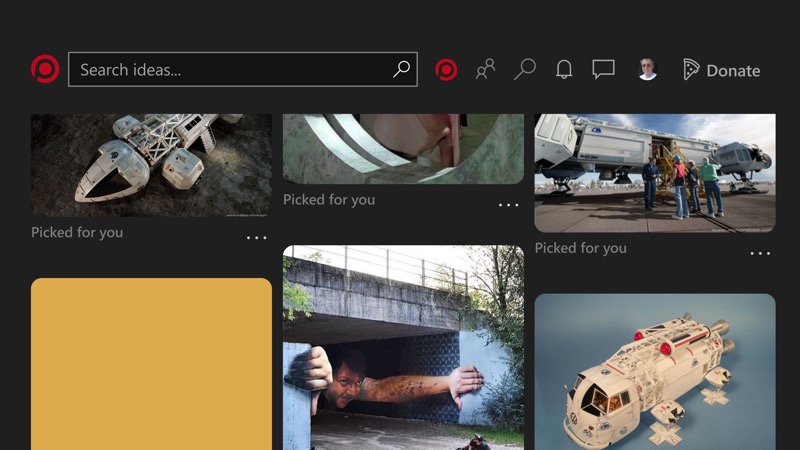 Note that Piny UWP works almst as well in landscape mode, with some very intelligent reformatting of the UI as needed - including with a Continuum display, e.g. with a NexDock. 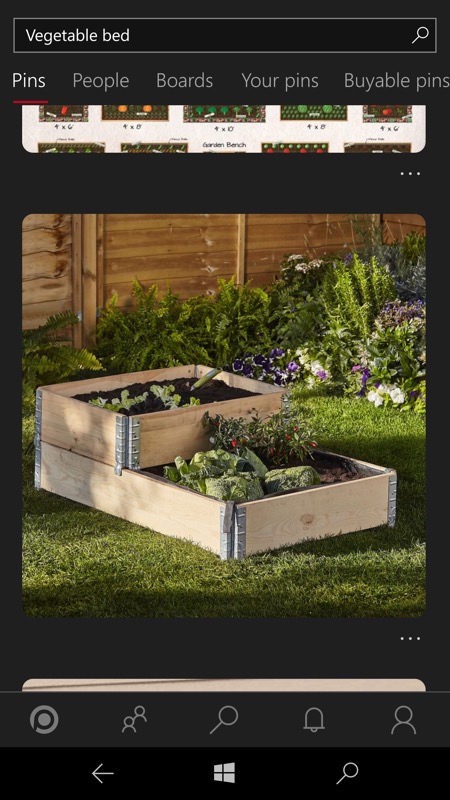 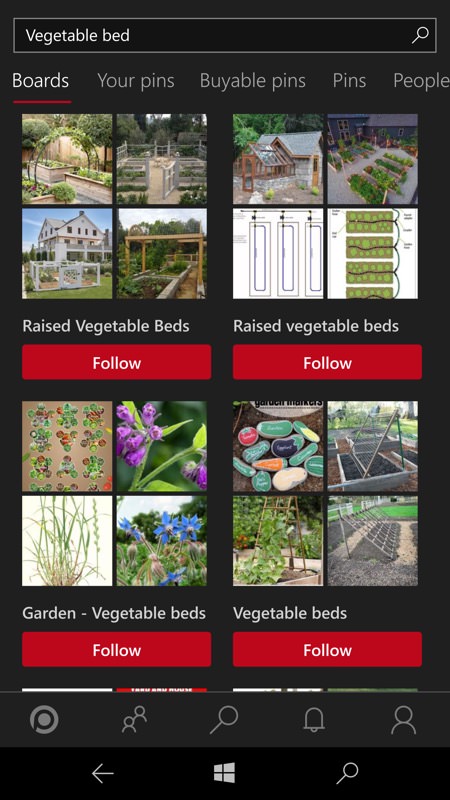 The joy of Pinterest, of course, is discovery and generally getting ideas. Here my wife had asked me to research vegetable beds! 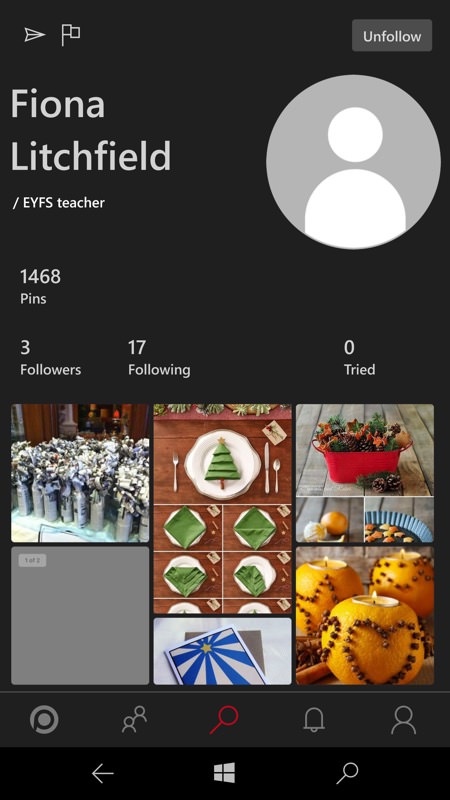 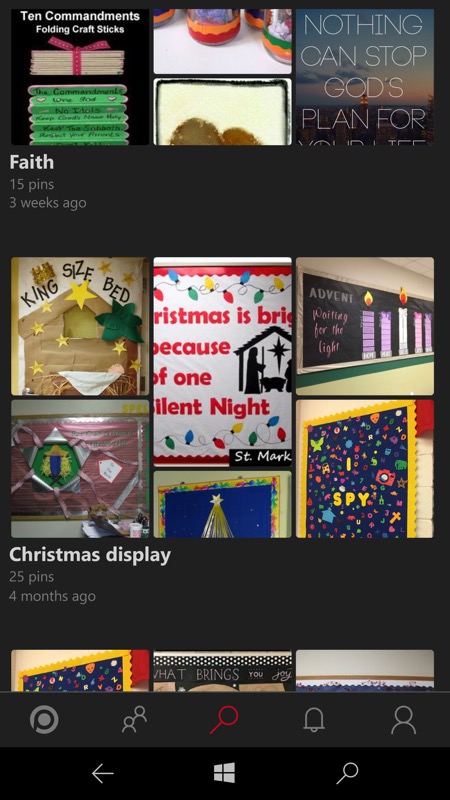 Talking of my (teacher) wife, she's a lot more active than me on Pinterest, here I'm browsing her Pinterest profile and boards... 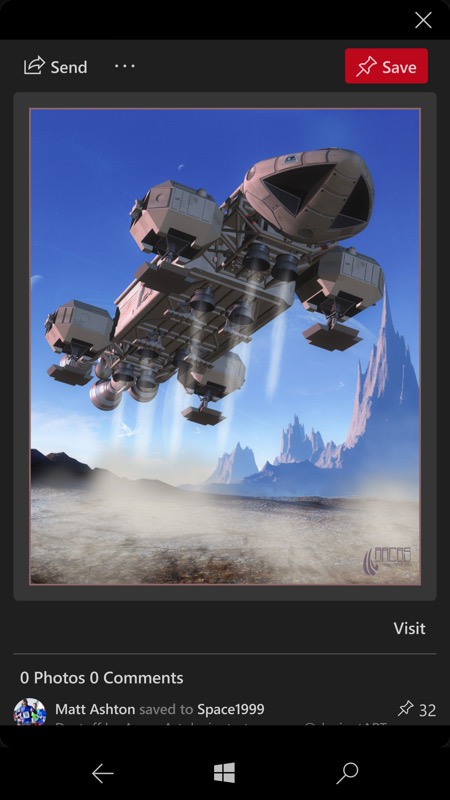 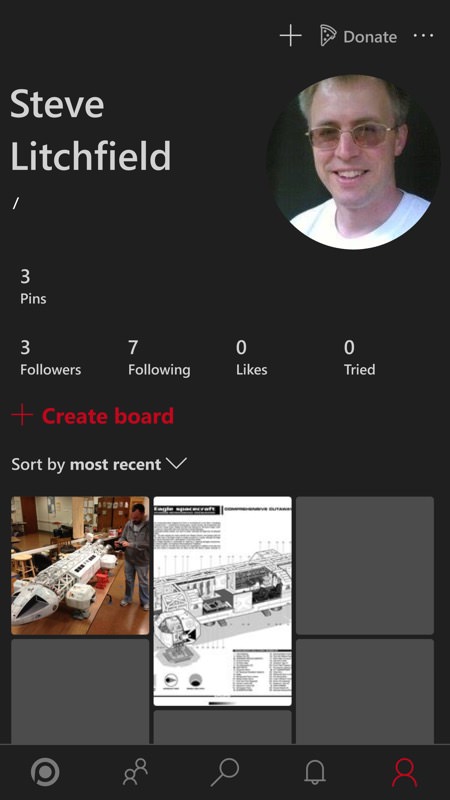 Last time I looked at Piny (2017!), I was using my wife's account - I've now started my own, but just getting started in terms of numbers. So there's not much to see on my own profile. Do note the grey rectangles here - this is Piny UWP not being able to pick up some pinned images from Pinterest, so possibly a bug or API limitation. Hopefully the developer can fix or workaround this. Note also the 'Create board' option... 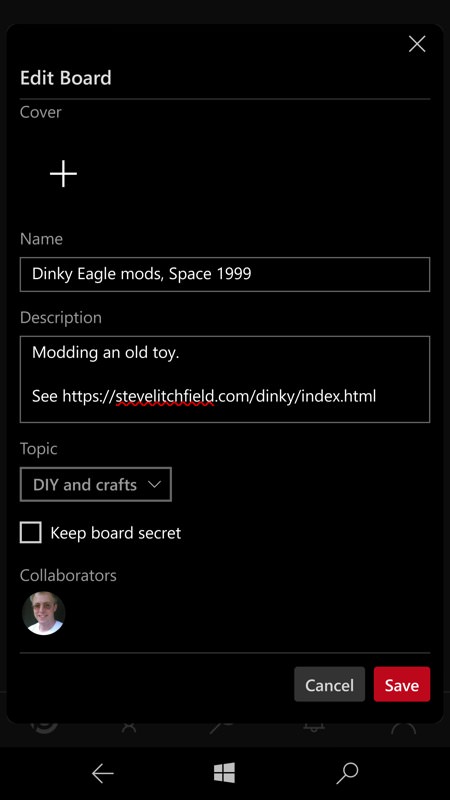 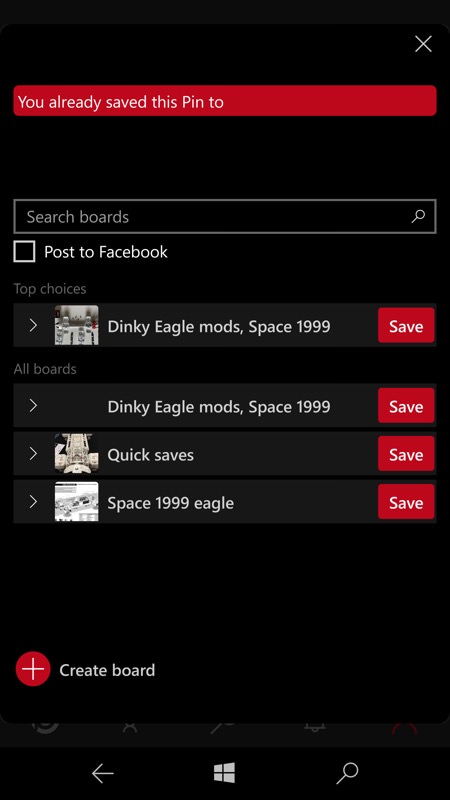 ...so I started a new board for some of my Eagle toy modification photos. Note the option to keep a board 'secret', perhaps in a family context when there might be private content. Your own - and recently used - boards are always just a tap away, and you can also pin something to more than one board if needed. 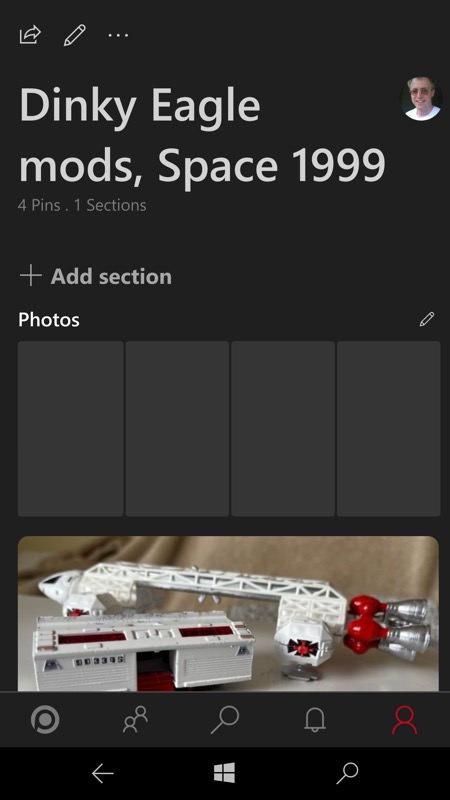 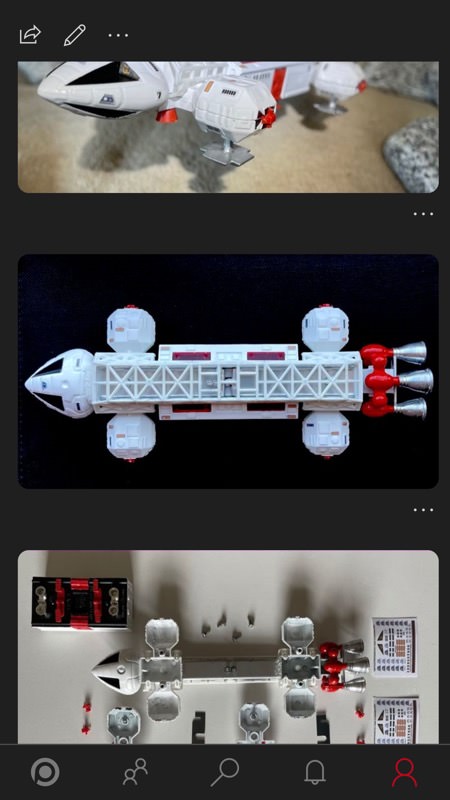 My created board then - also with grey rectangles, so something's clearly going wrong here. Watch for future updates from the developer. 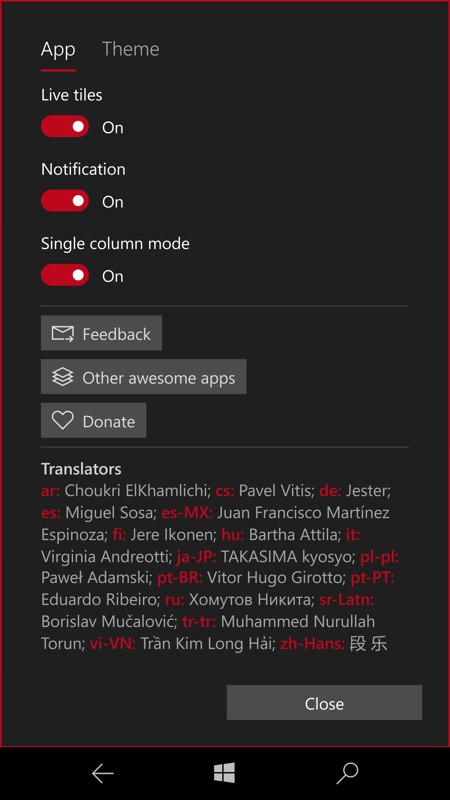 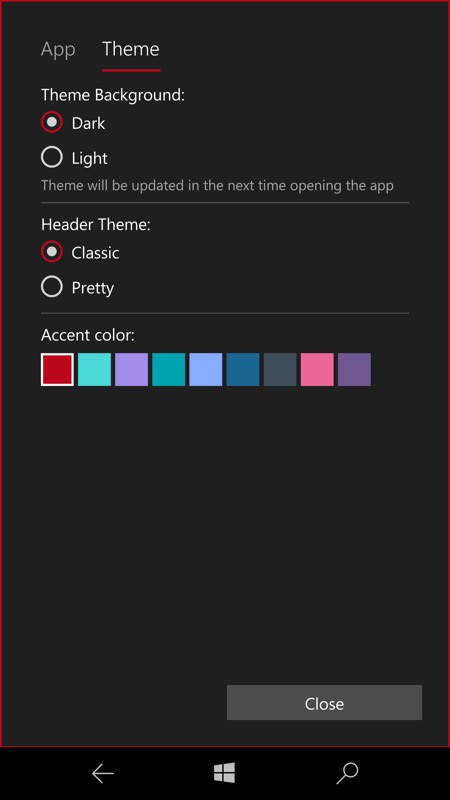 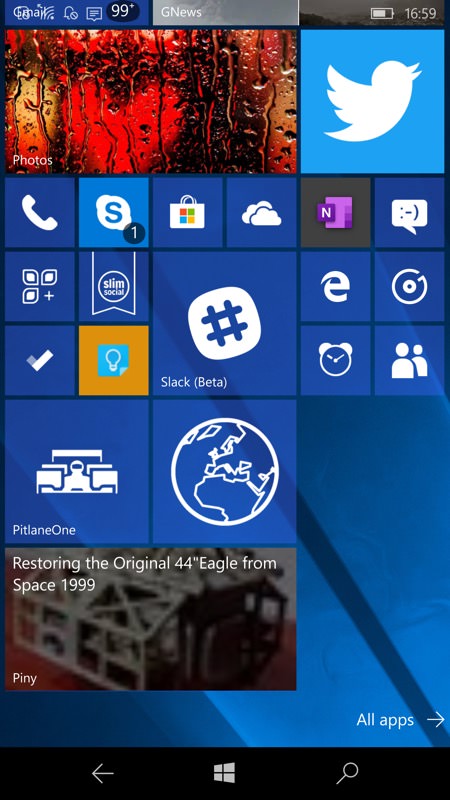 The live tile works well to highlight recent pins in your Pinterest suggestions, cycling between the top three, with titles. 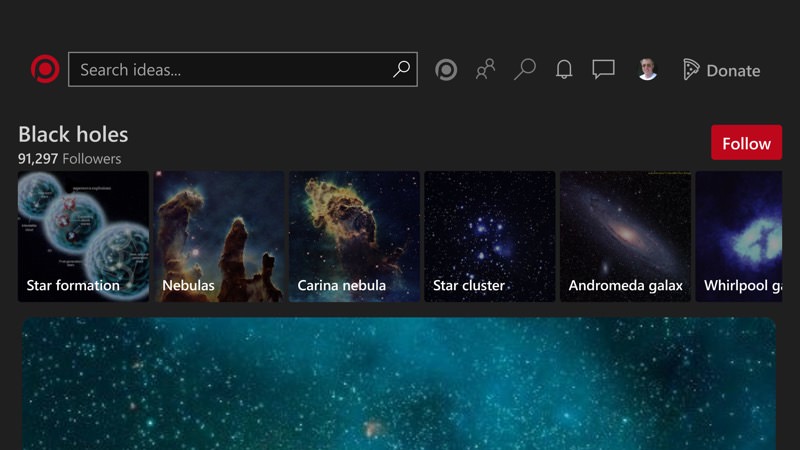 Again in landscape mode, which works especially well when you want to see more. You see, images are all resized to the phone's screen width, so in landscape mode there's more scrolling needed but you do get to see all images/pins physically larger. Which can help. It's up to you, just rotate your Windows phone to switch, it's all handled on the fly.

Now, the Pinterest web site is very clever and, in theory, works very well in Edge under W10M, begging the question 'Why use Piny UWP?' It's an accumulation of conveniences, I contend. Performance of the web site under Edge is poor (even on my Lumia 950 XL), you have to put up with the URL bar, you can't use 'dark theme', plus the floating navigation bar is a bit erratic. In contrast, Piny is smoother, prettier, darker, and more consistent.

Piny UWP is a free download in the Windows 10 Mobile Store, with a one-off in-app-purchase to remove the small banner ads.