As someone interested in the various aspects of the technology behind smartphones, I was intrigued by Nokia's use of the term 'PureMotion HD+' for the screen in the Nokia Lumia 920 yesterday. The HD+ bit obviously referred to the high (1280x768 pixels) resolution, but what exactly did the 'PureMotion' bit mean? There's an overview in a Nokia white paper, with the relevant quote embedded below.

Before reading this, flick up and down (or side to side) the interface on your current touchscreen smartphone and note how you can't read screen details on the moving panels/text clearly while scrolling is taking place. It's an effect that's so subtle that we've all got used to it, but PureMotion offers a way to improve clarity while the display is in 'motion'.

According to the Nokia white paper:

All display technologies currently used in modern smartphones, i.e. liquid crystal displays (LCDs) and organic light-emitting diode (OLED) displays, suffer from inadequate smartphone video quality. While hardware (HW) and operating systems (OS) are capable of delivering smooth rendering at a steady rate of 60 frames per second (FPS) for most of the displayed content, display technologies are still designedfor the era of lower rendering rates when fast-response time displays were not necessary. For consumers this means blurred display while scrolling, navigating, playing games, using the viewfinder etc.

With the typical in-plane switching (IPS)-type liquid crystal display in mobile devices,the pixel transition time is longer than the period of one rendered frame i.e. 16.7milliseconds (ms). In practice the time it takes a pixel to change its state from one level to another is spanning over several frames, thus creating blur....

...The way to overcome this problem is to use a temporary higher voltage difference for driving each LC pixel i.e. to overdrive the panel. This leads to the PureMotionHD having the best video quality.

In the end overdrive contributes to both reducing the liquid crystal rise time and also improving the consistency of the transitions... In order to be able to show any image at good motion quality with 60fps, liquid crystals need to complete their transition from the previous frame before transition starts for the next frame. In practice this means that LC transition time needs to be below one frame time for any transition, because it also takes some time to write the image to the display (panel addressing time).

With overdrive-enhanced LC response, PureMotion display pixels finish their transitionwell before the update of the next frame for any pixel needs to start, resulting in a less blurry image. 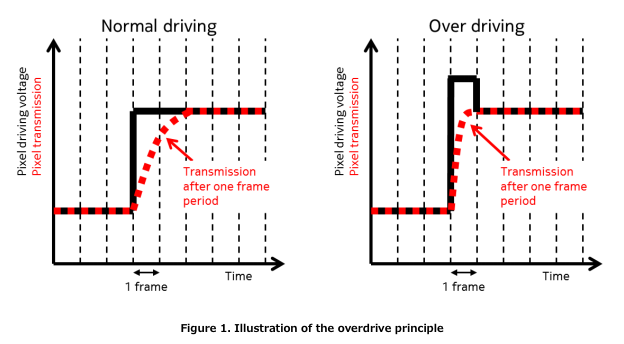 From the text, it does seem as if the overdriving technique is only for LCD displays, i.e. IPS in this case, as used on the Lumia 920 and devices like the iPhone 4/4S. So AMOLED screens may well be left slightly lagging behind (literally).

Is this a big deal for you? Is screen motion blur an issue for you? Comments welcome.