The Nokia Conversations blog has just announced a new range of back shells for the yet to be released Nokia Lumia 820. The new shells are ruggedized to provide extra protection for users who have a more rough-and-tumble life style. Interchangeable back shells are the unique selling point of the Lumia 820 which harkens back to the days of interchangeable covers that were unique to Nokia phones. Among the accessories announced with the Lumia 820 were wireless charging shells. This gave the ability for Lumia 820 users to not only change the colour of the device but to add extra functionality.

The rugged shells are said to also be made from Polycarbonate ABS plastic, like other Lumia devices. However, the make-up of the material is said to be softer – so as to elastically absorb impact energy. Nokia Conversations also say that the shell design is the same width and height as other shells, but slightly thicker. The softer material also extends around the front of the Lumia 820 so as to provide a degree of protection against screen impacts too.

Despite not being categorically stated by Nokia Conversations, the filename of the image used on the post suggest that these shells will be called "Active Shells", and appear to come in two-tone colour schemes: green, orange, or yellow, each with a black accent around the edges and corners. 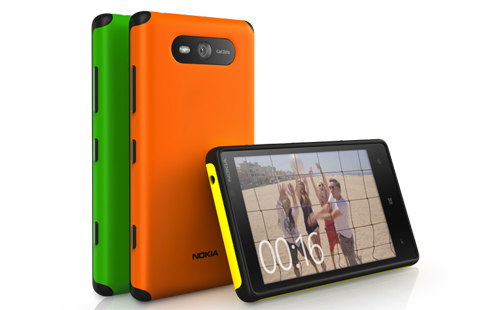 I checked with Nokia Conversations' Adam Fraser and he confirmed that these 'Active' shells do not include Qi Wireless Charging. This may leave consumers with a dilemma of which shell to choose for their Lumia 820.