One of the hardware improvements in Windows Phone 8 is support for NFC. Devices like the HTC 8X, Lumia 920 and Samsung ATIV S can use NFC to trigger the sharing of media (Tap+Send), pair with Bluetooth accessories, read NFC tags (e.g. business cards, smart posters) and, if supported by your mobile operator, make mobile payments.

The reading of NFC tags offers a wide variety of possibilities, from viewing a string of text, to triggering an action on the phone (e.g. opening a web address, open a specified app, and more). It's also possible to write your own tags, but to do this you'll need a helper app. One of the first of this type of app that we've seen for Windows Phone 8 is Nfc Interactor.

The Nfc Interactor app, from Mopius, can read any NFC tag and will show information about the data stored on the tag, and the writeable size of the tag, in an easy to read layout. That's useful for developers working with NFC tags, but may also be of interest to the NFC enthusiast.

This functionality can be used to create your own custom NFC tags. For example, you could create a tag that opens up an alarm app and place it next to your bed, or you you could write tag that triggers a call to a regularly called number. 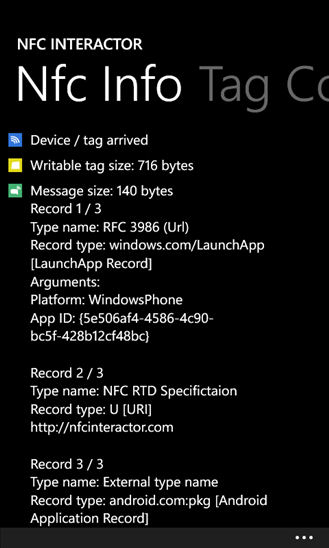 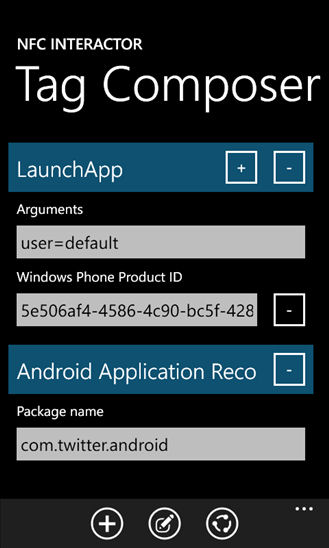 Tap NFC tags to analyze their real contents. Nfc Interactor will instantly tell you the writable tag size and parse standardized messages to human readable form. Write your own NFC tags using a dynamic message editor - including Smart Posters, geo tags, social networks and LaunchApp tags. Additionally, you can also send your messages to other NFC devices simply by tapping.

Developers will be interested to know that the core NDEF (NFC Data Exchange Format) library used by Nfc Interactor is available as open source through CodePlex. This has the potential to save significant amounts of time and effort when implementing NFC solutions on Windows Phone 8 and Windows 8.