Fling rocks with your tongue in King Oddball

King Oddball is a new game, from well regarded mobile developer 10tons, that sees you using the long tongue of a giant ball of rock to throw smaller rocks at various objects (tanks, helicopters) scattered throughout an obstacle strewn landscape. It's game-play is reminiscent of a cross between Angry Birds and Tanks Wars, but there are enough original elements to make it stand out from the crowd.

Essentially you are catapulting rocks across a landscape. The obstacles in the landscape have an impact on the rock (e.g. bouncing off walls, rolling down slopes, launched from explosions) with the skill being to release the rock at just the right time to eventually hit the target... and of course the underlying aim is to use as few as rocks as possible.

But it's really the slightly off-the-wall humour and slightly eccentric art work that provides the initial hook to get you playing the game. Once you do, you'll find many of the game mechanics will be familiar, but that's not really a bad thing, rather it makes for a gentle learning curve and easy game play, making the game accessible to all. 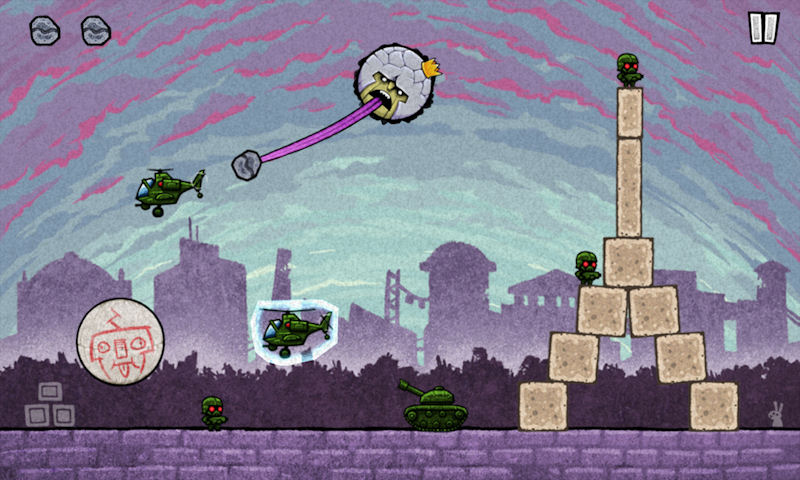 King Oddball, which is available for multiple platforms, has more than 120 levels, extra secret levels, 15 achievements to unlock, and original music by Jonathan Geer. It's clear a lot of love an attention has gone into creating the game, but you do wonder a little about the sanity of the developers... the concept is a more than little barmy. Still, that really only adds to the addictive game play, fun graphics and distinctive audio. A lot of games are going to enjoy a title like this, and if you're a fan of the action-puzzle genre then it's definitely a recommended download.

End the world with boulders! King Oddball swings a boulder back and forth with his tongue. Release it by tapping the screen. Time the release accurately and crush as many targets as possible with each boulder. Simple but addicting!

Gain extra boulders when crushing three or more targets with a single throw. Master the game by anticipating how the boulders roll, bounce, and launch from explosions. Take advantage of collapsing structures too!

Conquer the world by defeating the humans in more than 120 fun and increasingly challenging levels!