The monthly data from AdDuplex looks at various aspects of the Windows Phone ecosystem, and for July there's one clear message - the Lumia 520 from Nokia is cleaning up. In the worldwide adoption chart, it's jumped from fifth place in June to take the number one spot in July with a share of 13.3% share of the platform - the Lumia 920 is in second place with 11.8%.

Of the top ten devices, Nokia took the first nine, with the HTC 8X Windows Phone in tenth on 3.7%. 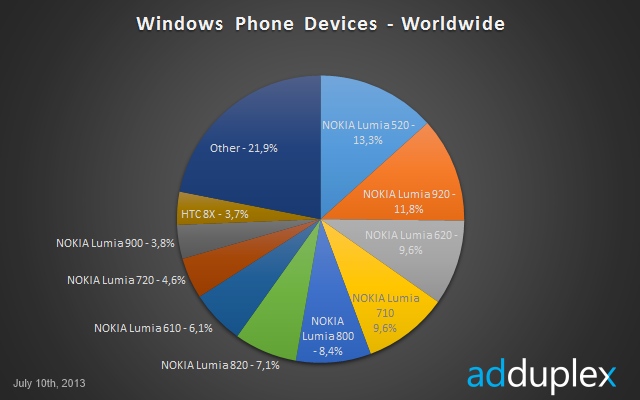 AdDuplex's numbers are derived from third party applications that use the ad server's API code (which can report on the phone model, rough location, and of course when and how often that app is used). While it would not be fair to put sales or hard numbers onto this methodology, trends and shares are fair game. The sample base was 836 Windows Phone handsets on one day, July 10th 2013. That gives a rough margin of error of 3.3%.

I'm glad to see that Nokia's high end and low end strategies are coming together in the top two places in the chart. While I don't expect the Lumia 1020 to top this chart (it does have a narrower target audience than the Lumia 925 variants), the halo effect of the Lumia branding should drive the Lumia 520 to higher sales.

More numbers and graphs from AdDuplex can be found on their blog.