TweeCoMinder is handy utility app for the power Twitter user. It provides an easy way to keep track of the total number of tweets you have made and will alert you to upcoming milestones (e.g. 5,000 tweets). That can happen either within the app, or via a Live Tile pinned to the Start screen.

The app lets you correct for the well known tweet count bug (API and Twitter website can show different numbers in some circumstances) and, while a number of milestones are included by default, you can also specify your own milestones (e.g. tweet number 123456).

As you might expect the app will also help you tweet about an actual milestone (or how close you to a milestone) via a number or pre-written templates tweets (e.g. @TweeCoMinder just told me that I have 9238 tweets...), which should give the app a little extra social promotion boost should you choose to use them.

One thing we particularly liked about the app is the detailed in-app help section. This explains what TweeCoMinder does (let's be honest it is a bit of a specialist app), how it works (cloud backend), and how to get the most out of the app (settings). Including this in the app make it easy to access and also prevents the Windows Phone Store description from getting overloaded with extra text. 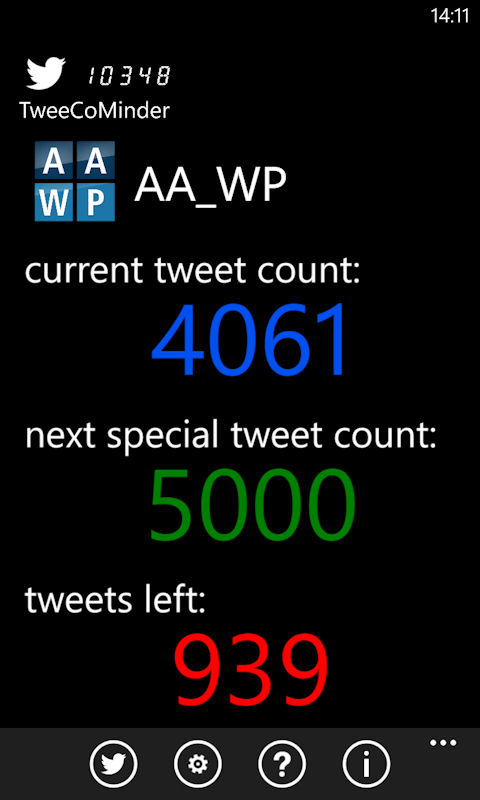 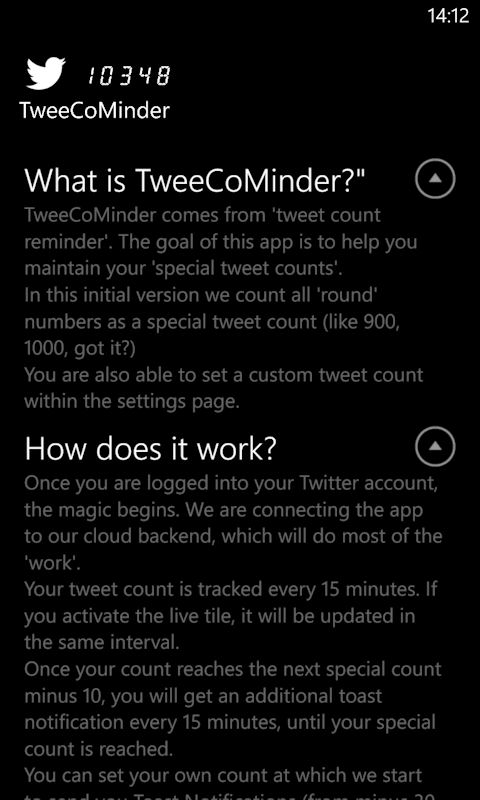 TweeCoMinder is something of a specialist app, sitting in a niche within a niche (regular Twitter users who care about their tweet counts), but it is interesting to see these kind of social network helper apps arriving on Windows Phone as developers seek out new app opportunities. Another example of this trend is Instagram tag app Tagram.

We often read this on our timeline, no matter if developer, user or tech guru.

We decided to do something against this: TweeCoMinder is our solution.

TweeCoMinder can be downloaded from the Windows Phone Store. A free trial is available (5 days functionality), with the full app costing £1.29 / €1.49 / $1.49. Those that don't care about tweet counts will wonder why on earth anyone would pay for such an app, but those that want help achieving an on-number celebratory tweet will be happy to pay the asking price. The pay nature of the app is also necessary given that it is relying on a web service backend.