AdDuplex publishes regular reports on the breakdown of devices (and countries / languages) active in the Windows Phone ecosystem based on data drawn from its advertising network (1,242 apps running AdDuplex SDK version 2.0 for the September report). The data represents a sampling of the active installed device base for Windows Phone, albeit one biased to those users who are more likely to install apps, as of September 20th 2013.

The global figures hide considerable regional variations. For example, in the subsidy heavy US the top device is the Nokia Lumia 822 (14.6%), although the Nokia Lumia 521 (14.2%) and Nokia Lumia 520 (3.6%) combined would be in first place. The two low cost devices have started to make headway in the US after being ranged by more operators (AT&T and Metro PCS) and priced aggressively. 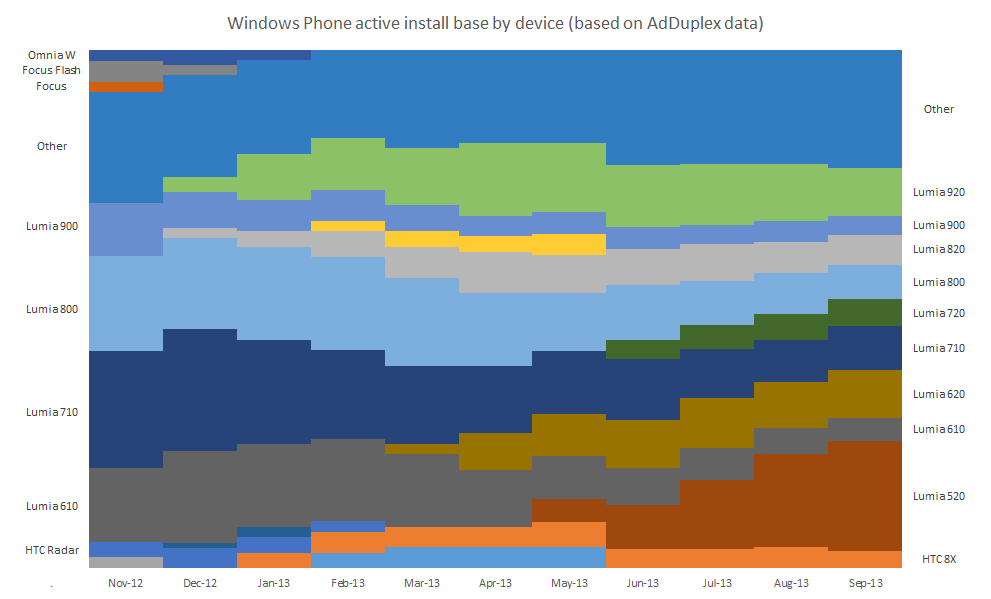 This month AdDuplex has also provided some data on different Windows Phone 8 version, which is of interest becsuase of the recent release of GDR2. GDR2 is currently on 30.6% of Windows Phone 8 devices, against 67.7% for GDR2, and 1.7% for the original release version. This is relatively speed uptake of the new version of the platform, especially considering the process of updating devices is still underway, and, in some cases, GDR2 is being skipped in favour of releasing a GDR3 update (mainly limited to HTC devices).

As you might expect Nokia remains the leading device manufacturer for Windows Phone devices. 88.4% of active Windows Phone 8 devices are made by Nokia, with HTC in second place on 8.5%, Samsung in third with 1.9%, and Huawei in fourth place with 1.2%. There have been only minor changes to these numbers in recent months, although Nokia continues to gain fractionally each month (up 1.5% from the previous month).

The proportion of Windows Phone 8 (67%) devices compared to Windows Phone 7 devices (33%) continues to grow (up / down 2%). The rate at which this ratio is changing has slowed somewhat, but that is not surprising (each percentage point change requires a greater number of Windows Phone 8 devices the point before).

As we have previously commented this metric is of particular interest to developer considering which version of the platform to target:

Now that almost two thirds of devices are running Windows Phone 8 developers can begin to consider whether to continue produce Windows Phone 7 versions of their apps. In many cases there will be little or no overhead to do so, but in other cases, where a Windows Phone 8 only API is being used, this may not be the case. The point at which producing a Windows Phone 7 app no longer produce a positive return on interest will vary from app to app (dependent primarily on cost).

This conundrum was reflected in a recent announcement by Microsoft that it would not be releasing new version of the Skype app for Windows Phone 7 devices. 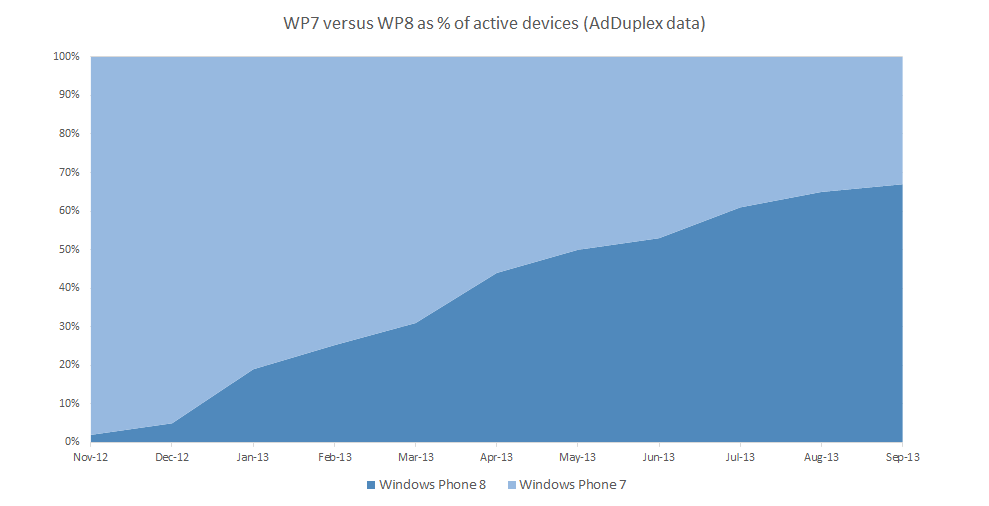 A full version of the AdDuplex report will be published on the company's blog tomorrow. Update: now available.