There's a nice piece of journalism from Paul Acevedo over on WPC today, looking into why certain Xbox games have been disappearing from the Windows Phone Store - it turns out that there are issues over ownership, with Microsoft pulling back a little, to only publish self-written titles for Xbox and as a result third parties who previously had Xbox branding are now being forced to decouple the linkage and re-publish the games independently. 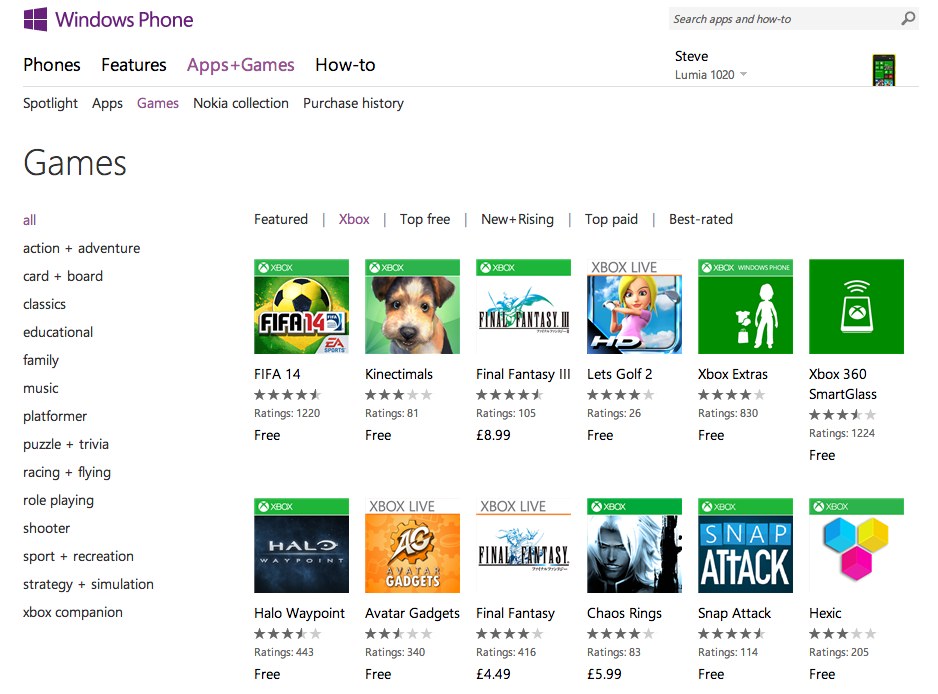 Xbox games for Windows Phone have fallen on hard times. New releases are all but non-existent on Windows Phone, and Windows 8 releases have dwindled to a smattering of casual games that Microsoft likely commissioned long ago. This has caused a measure of discomfort to some gamers who joined the mobile Windows platforms for Xbox Live games. I felt pretty bad about it for a while (a year ago).

As if the lack of new mobile Xbox releases and PR from Microsoft wasn't bad enough, the existing lineup of Xbox Windows Phone and Windows 8 games is starting to disappear. Last month we brought the news of Zombies!!! disappearing from the Windows 8 store, only to reappear as a non-Xbox game. Many more games have been delisted within the last few weeks as well, including Carcassonne, The Harvest, and Rocket Riot. Read on for a full list and some insights into why mobile Xbox games are dropping like flies....

...The reason for this new mass delisting is ownership. Although Microsoft published all of the affected games and controlled some aspects of their fates (such as pricing and updates), most of the titles still belong to their individual developers. That's the sort of publishing agreement that developers generally want, but Microsoft seems to be shifting away from those deals. Recently, Ryse 2 for Xbox One was reportedly cancelled due to developer Crytek's unwillingness to relinquish ownership of the Ryse IP.

"Microsoft publishing decided to trim out any titles that they do not own, and that do not fit their current portfolio," one of the affected developers explains. The game received notice of the delisting about six weeks in advance, the notification coming by call or email. Most of the developers were given the option to republish their games without Xbox features. Exceptions include Gunpowder and Gunstringer: Dead Man Running; those games are still owned by Microsoft and will not return unless the big MS has a change of heart.

Read the full article here on WPC. There's a lot more, including specific examples and special cases, with developers chipping in with their plans.

The whole Xbox social gaming idea is/was a good one, but it never really engaged me - I suspect that it would have taken almost every game to support it for the Xbox hub to have made sense on Windows Phone. As it was, non-Xbox games outnumbered Xbox titles by ten to one. So I'm not altogether surprised to see Xbox branding sidelined in this way.

Ultimately, the best games will all re-appear, if they haven't already, outside the Xbox umbrella. The only real losers in this whole saga are any end users who invested time and money in Xbox titles which will now either not exist or, at best, not be updated anymore - the new, independent versions won't pick up the same in-app-purchases, scores and achievements.