8.1 now on (at least) a quarter of all Windows Phones

It's always interesting to see data on how a platform is evolving, in this case using AdDuplex's latest data, gathered five days ago across around 5000 Windows Phone applications for which the network supplies in-app adverts. While not a definitive set of stats (skewed towards users who use ad-supported applications - I don't, as a rule, for example), the results are still worth quoting.

From the full report, which can be downloaded here, looking at worldwide data in each case: 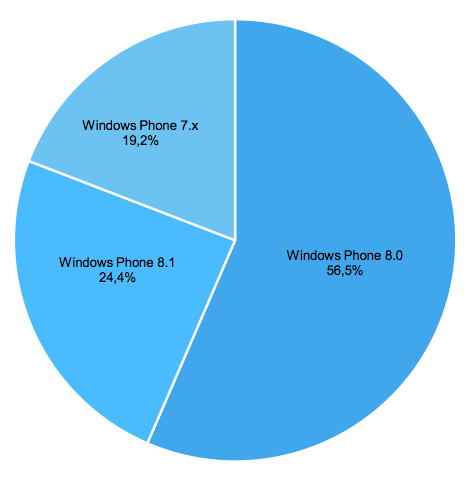 I guessed a few days ago that 8.1 would be up nearing 50% by now, given the extent of the Lumia Cyan rollout, but it seems I was a little over-optimistic. Mind you, it does depend on the demographic being talked about. I'd guess that well over 90% of AAWP readers are on 8.1, being more inclined to be using SIM-free handsets and also being more active at searching out and applying OS updates, while users running ad-supported applications are in the 'silent majority' and are more likely to be running network-locked contract and PAYG handsets, not all of which have had the 8.1 update approved yet.

Seeing 7.x still represented so heavily just shows how long people hang onto smartphones, though I'll bet that a lot of these are now in the hands of kids and teenagers (i.e. 'hand me downs').

Looking at the data by manufacturer: 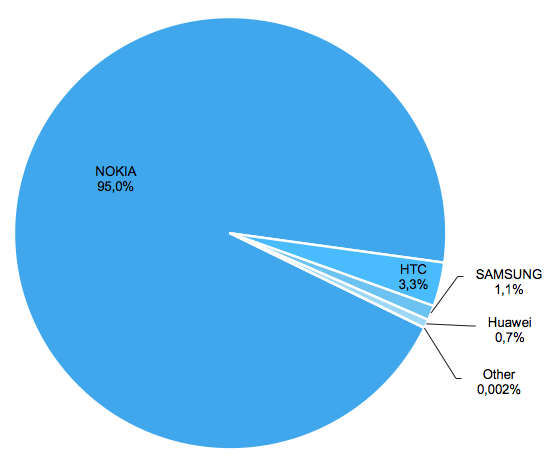 No surprises here, though the new OEMs have just started to ship Windows Phone 8.1 handsets in the last week or so, plus the HTC One (M8) for Windows also started shipping this week, so I'd expect to see a larger non-Nokia showing in September's data. Remember that these are useage figures, not sales, by the way.

Also, note that by 'Nokia' here we now mean 'Nokia by Microsoft Mobile'. Sigh. And yes, it's confusing! 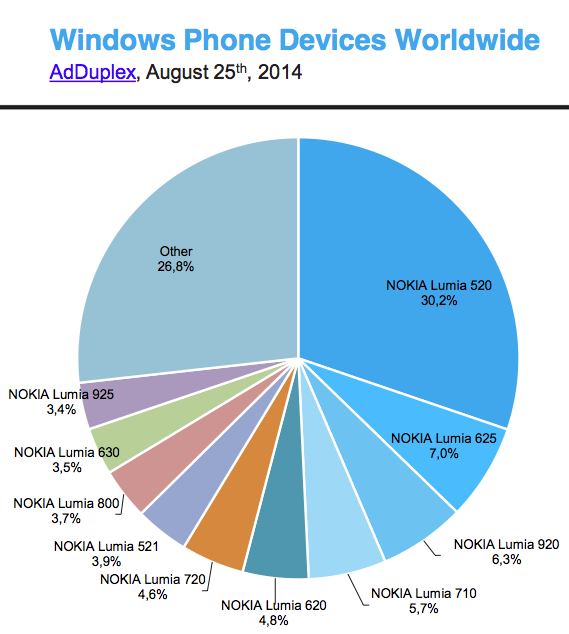 As ever, the Windows Phone-using landscape is dominated by low cost devices, topped by the best-selling Lumia 520 (and rightly so, it's astonishing value for money) and the less well known but surprisingly popular 625. My contention that the 920 was by far the biggest selling top-end Lumia is proved right here, with double the use across the world compared to the slimmer and newer 925.

Of particular note is that the flagship Lumia 1020 and 1520 are each less than 3.4%, despite their popularity among AAWP readers. Though, if you click through to read the full PDF report, you'll see that these two models do rather better in terms of ownership in specific Western markets like the UK.