New in the Windows Phone Store and with official Marvel characters and graphics throughout, Spider-Man Unlimited is extremely fast and definitely one for those with quick reflexes and good eyes - and with rich parents who don't mind in-app purchases of up to (wait for it....) £80 a time. Yes, really.

Swing into a hand-drawn Comic-Verse in a brand-new episodic adventure! Unite the Spider-Verse and recruit an army of Spider-Men to stop the new Sinister Six, who have opened a dimensional portal to summon different versions of themselves! The Sinister Six are moving from dimension to dimension – destroying each one – and ours is next!

MOST SPIDER-MEN EVER IN A GAME!
• Summon, collect and play with tons of Spider-Man cards from the Marvel Universe, including Spider-Man Noir, Cosmic Spider-Man, and Scarlet Spider!
• Collect, fuse, and level up your Spider-Men, each with their own unique in-game benefits, and send them on Spidey Ops missions!

Essentially, this is a first person infinite runner - think Temple Run but with swipes and taps to initiate blows against various opponents and swings between skyscrapers. It's fast - very fast, and anyone over 20 will have trouble keeping up with which swipe, dodge and action is needed in each fraction of a second. It's freemium too - not an issue in itself, but I hate to see maximum in-app purchases of the level here, clearly designed to trap the unwary.

Here's Spider-Man Unlimited in action, with my thoughts: 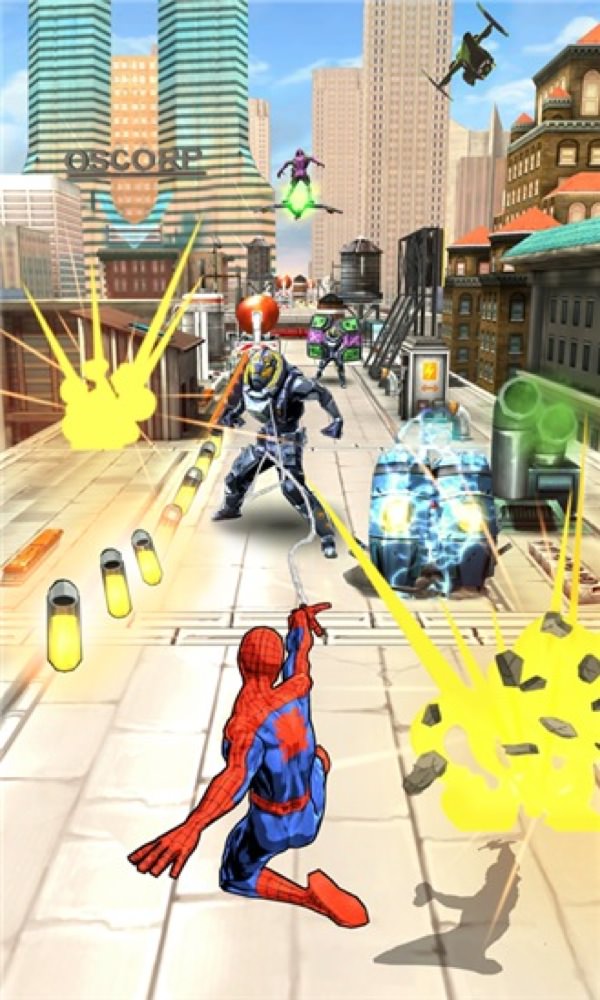 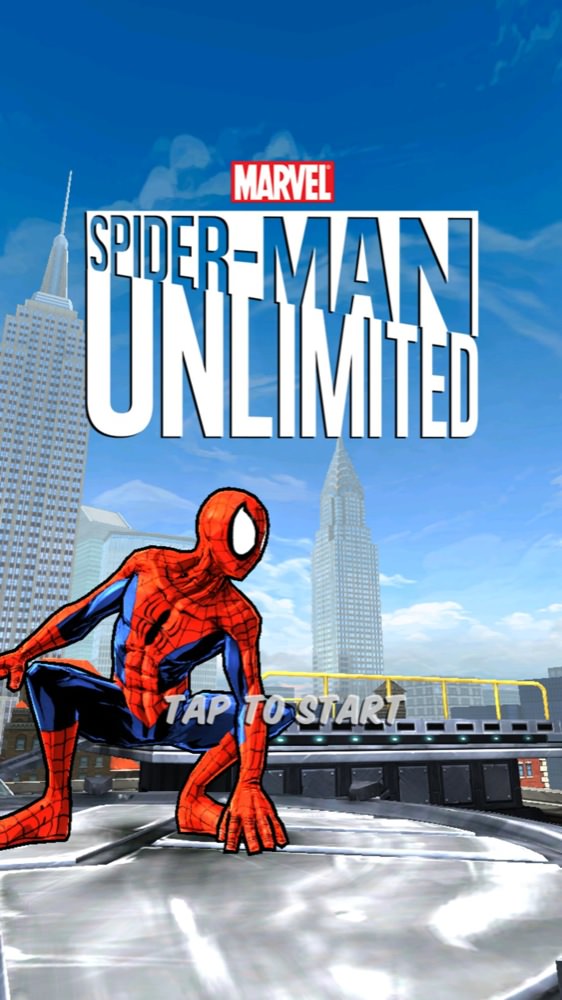 (Left) one of the promo images, captured mid-action, showing how intense screen action can get - it's a far cry from the 'relaxed' flight from rampaging hordes in Temple Run! (right) Artwork and story are all authentic.... 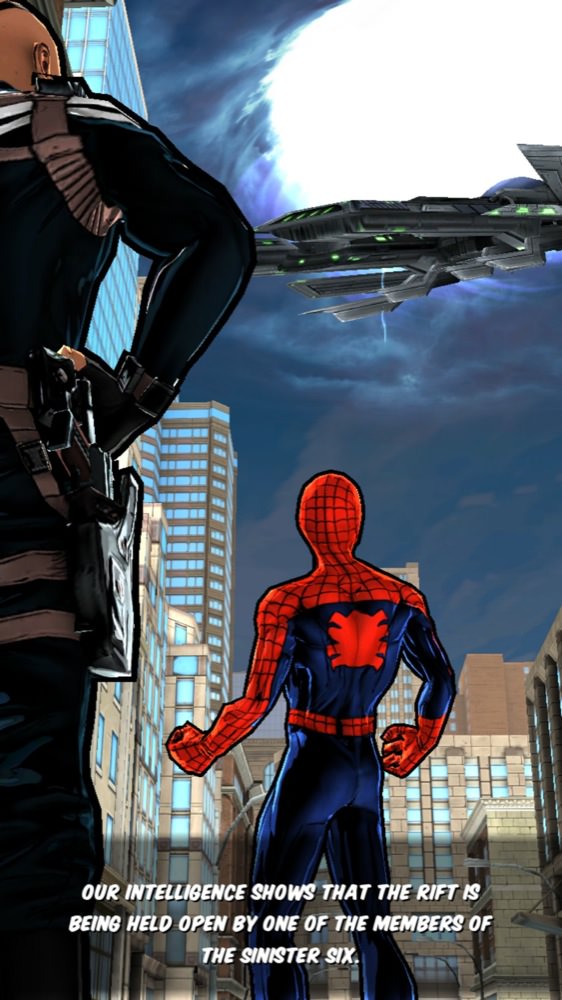 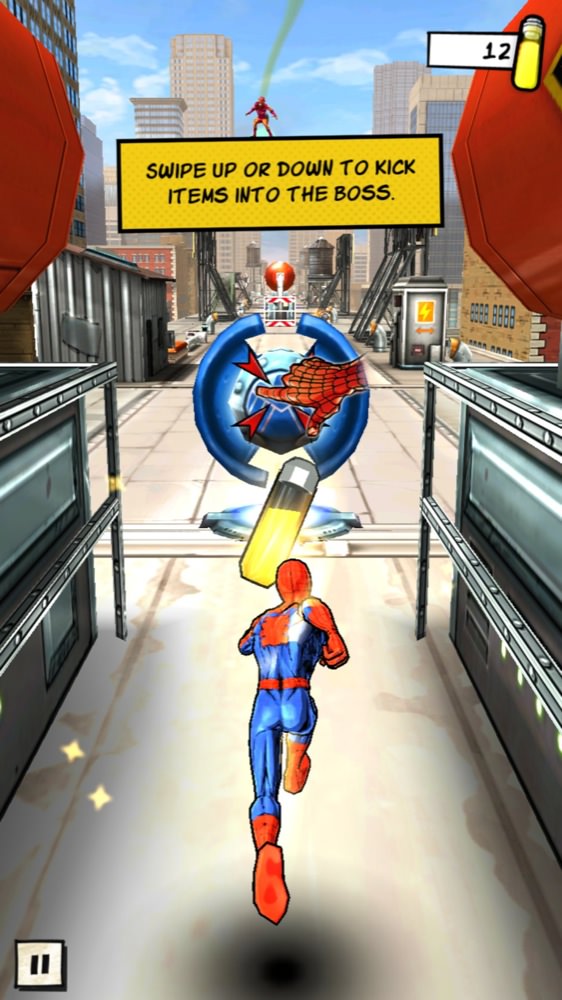 Uh-oh, didn't you just know it, the earth's under attack yet again! (right) In addition to collecting power capsules and avoiding obstacles by dodging left and right, there are enemies to defeat by swiping up (some of them) and swiping down (the others) - annoyingly (for me) it requires reflexes of lightning to spot which are which and modify your attack swipe accordingly! Still, that's all part of the game.... 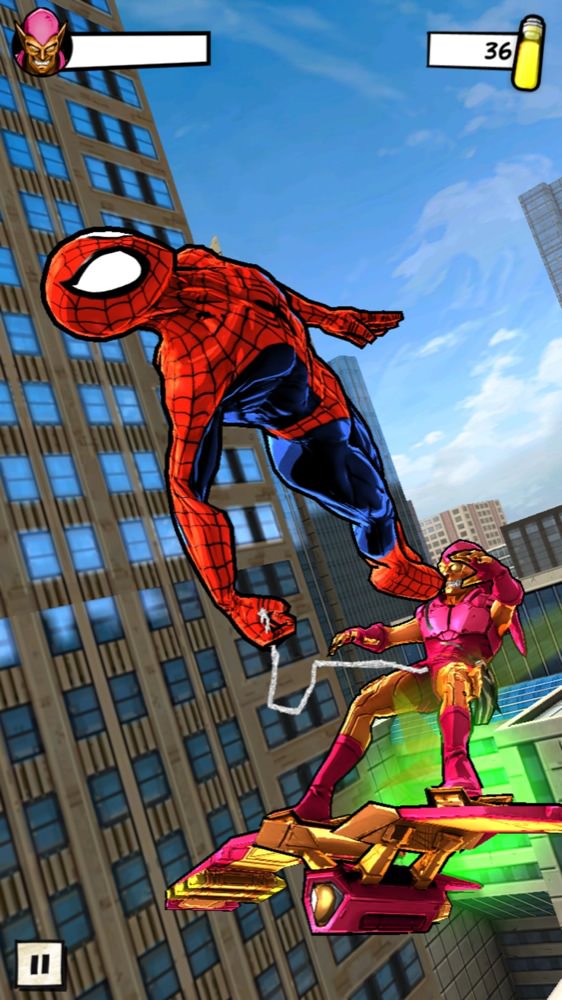 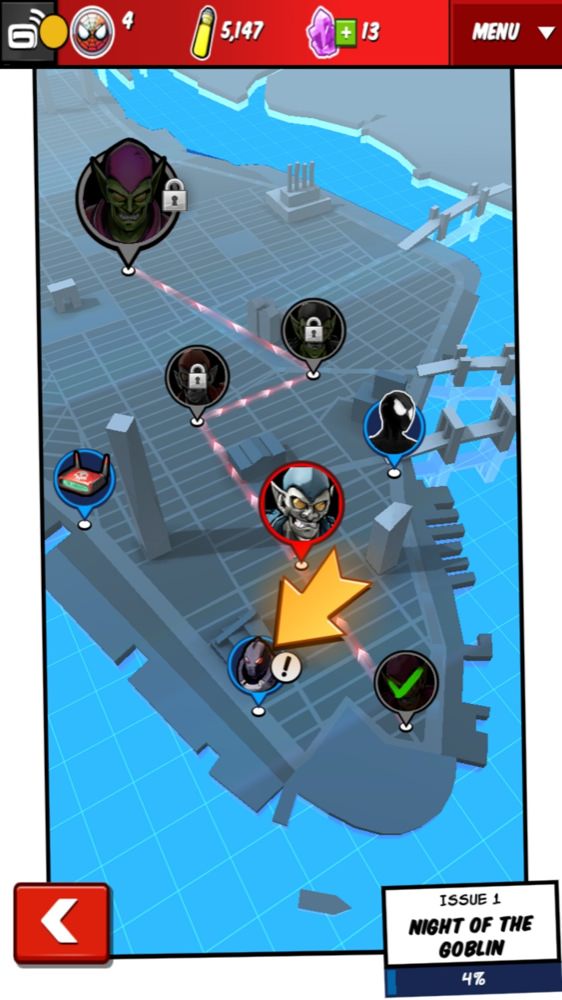 There are mid-air fights too, this is caught mid-action; (right) you work your way around Manhattan, tracking down and defeating the bad guys... Note also the in-app currencies at the top of the screen - power capsules and 'ISO-8', effectively the money/gold.... 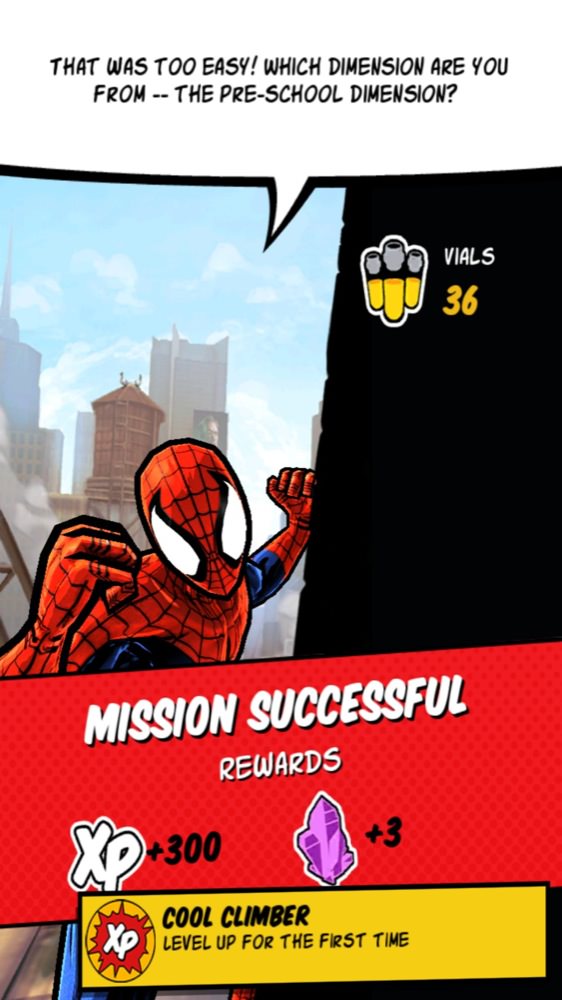 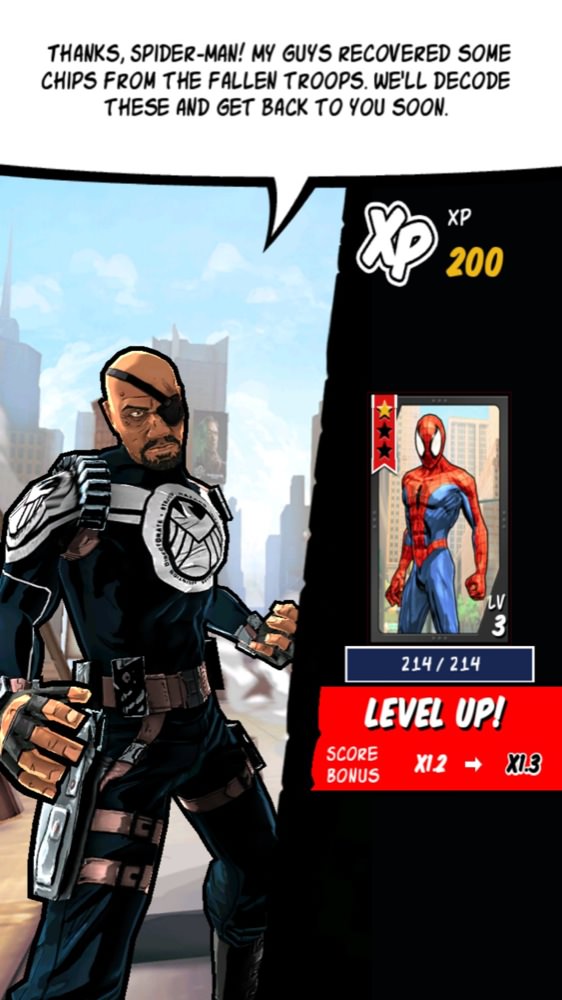 Playing through levels earns ISO-8, as does (later in the game) watching ads from third parties - plus you can also buy ISO-8, to enable new powers and new character variations.... 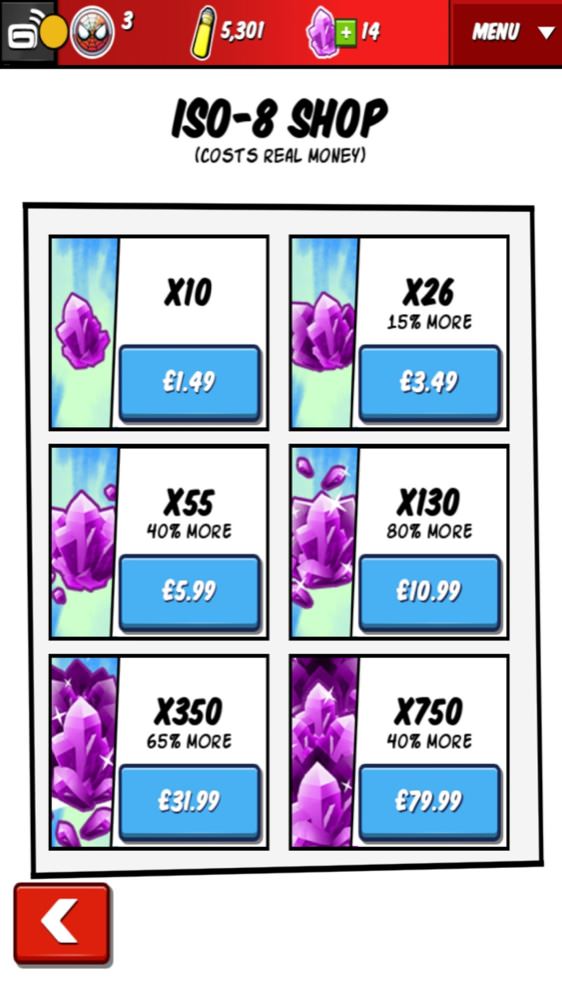 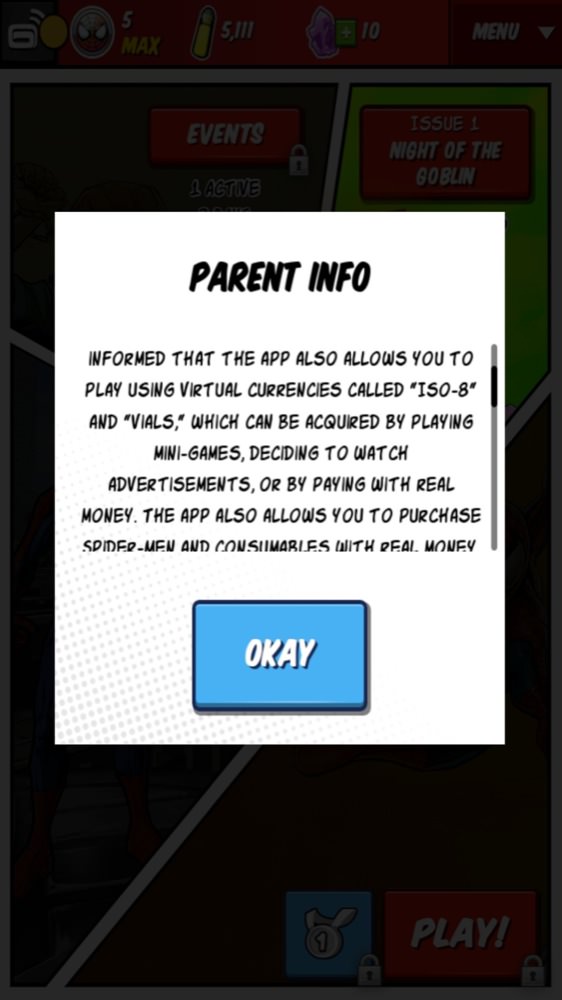 But oh dear - as shown in the last screenshots above, the possible in-app purchases aren't capped. Remembering the teenage market being aimed at, surely there should be a cap at (say) £5.99? Yes, a PIN will probably be needed from you, but as a parent myself, I know that a teenager takes all of 2 seconds to watch and learn a parents password and PINs. Gah. (right) In fairness, there's a lengthy warning text for parents before the game even begins. But still, this is freemium again 'done wrong'. More restraint is required from publishing companies, I feel.

The game notes do say that this version of the game contains two 'issues' (The Green Goblin and The Vulture), with another issue coming soon, though there's still plenty here to enjoy if you're careful and skillful.

Note that the game doesn't work on the HTC 8X or indeed any Windows Phones with only 512MB of RAM, which seems a missed opportunity, given that most of the target market for the game will be on mid range or lower end devices specced like this. Sigh.

Anyway, you can find Spider-Man Unlimited in the Store here.