Getting 'freemium' right is hard. It depends on the amount of value you're giving a user/gamer, it depends how much gameplay you give away for free, it depends if you need the freemium purchases to make progress or whether you can get through the game with just skill and hard work on your own. Developers Vector Unit have pushed the boundaries of 'acceptable freemium' quite hard, with three pounds here, $10 there, and so on, plus the obligatory multiple currencies (coins/gems/etc.) If Beach Buggy Racing was a ropey game then I'd be slamming this title to high heaven. Happily, the game itself is enormous fun and lovingly implemented - if anything, you'll want to use one of the freemium packages to reward the developers after half a dozen races to say 'thank you'. A win-win for both Vector Unit and the Windows Phone user!

Beach Buggy is back with an explosive sequel! Drive into an action-packed, surprise-filled world of off-road kart racing mayhem. Race against a field of rival drivers, each with unique personalities and special abilities. Build a collection of crazy powerups, like Dodgeball Frenzy, Fireball, and Oil Slick. Unlock and upgrade a variety of cars, from dune buggies to monster trucks. Test your skills in 6 different game modes on 12 imaginative 3D race tracks, against a pack of tropical-loving rivals with a serious case of road rage! 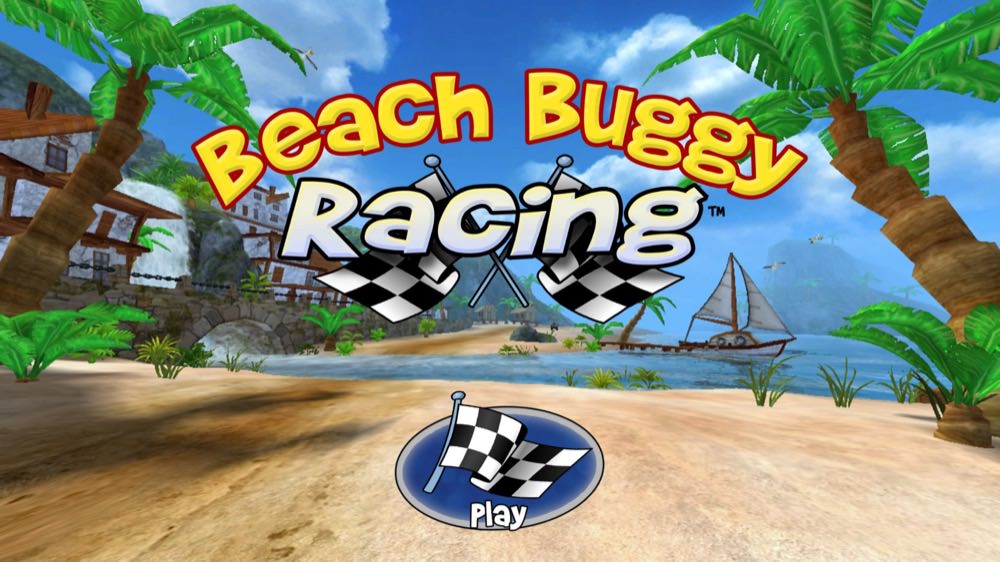 Initial impressions are terrific, animated menus and cut-scenes, seagulls flying by, the works.... 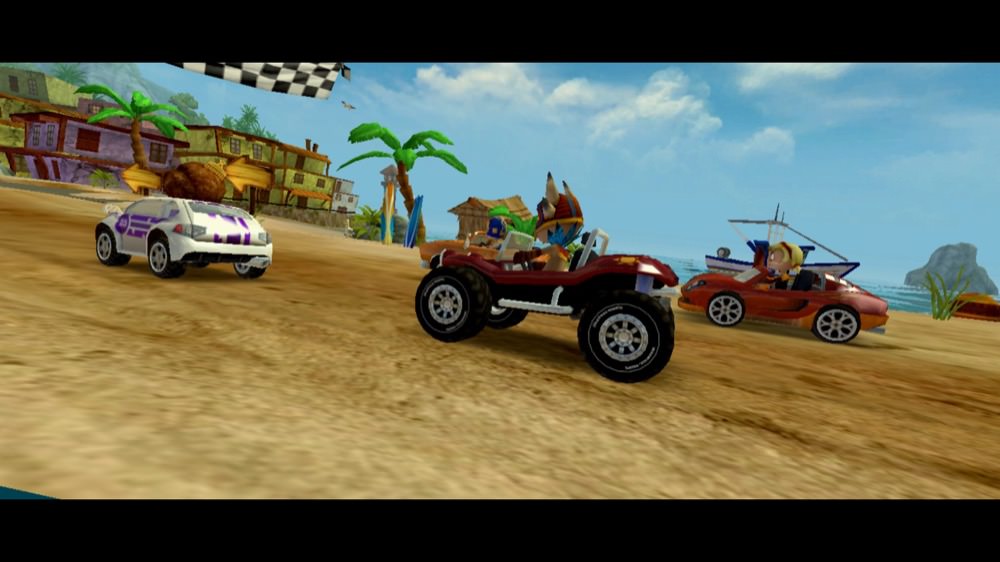 And everything's rendered in 3D at all times - I was expecting mention of the Unity engine, but maybe this is all hand-crafted. Great job. 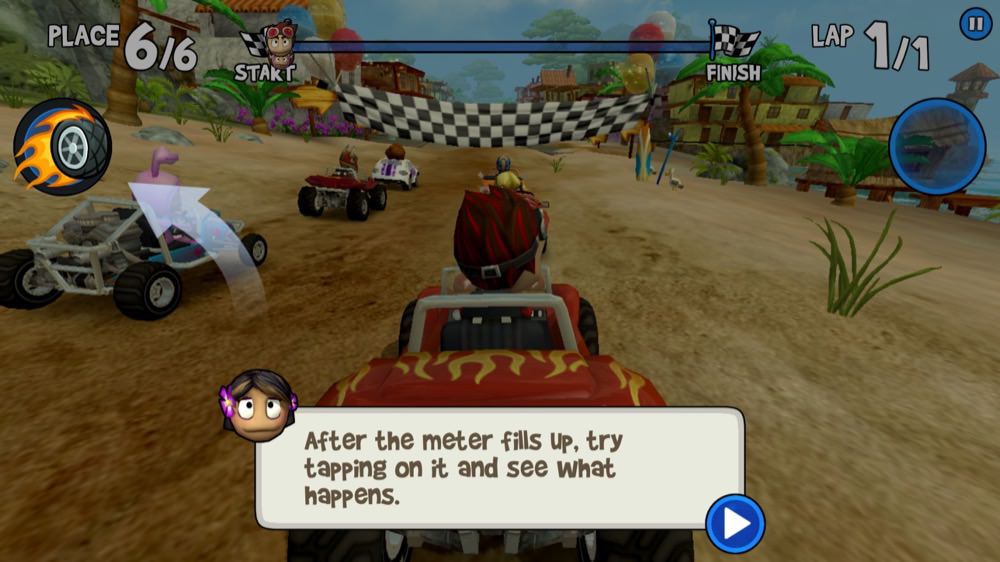 Intro prompts show you what the various screen elements and controls do.... 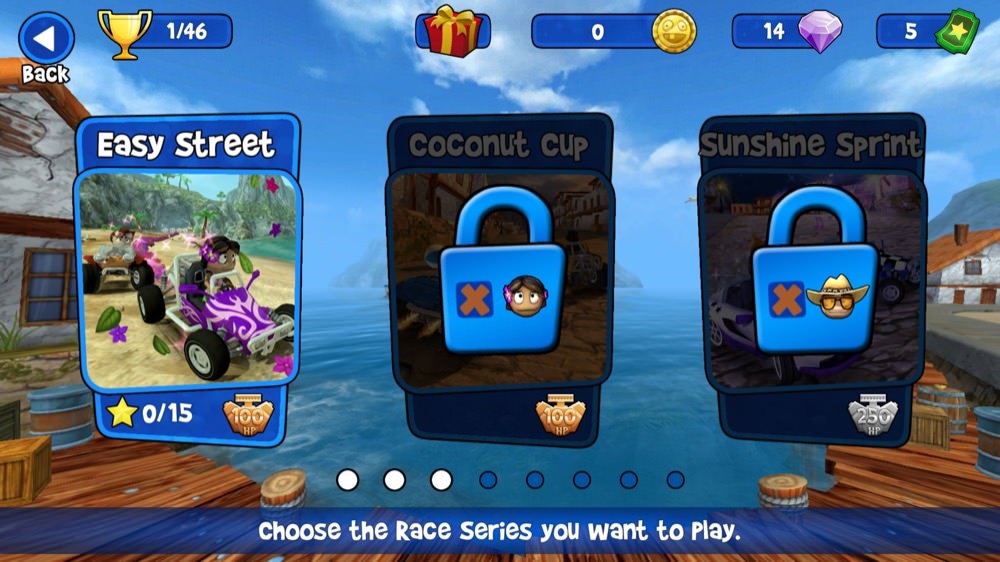 There are hundreds of levels overall, spread over a dozen 3D worlds/tracks.... 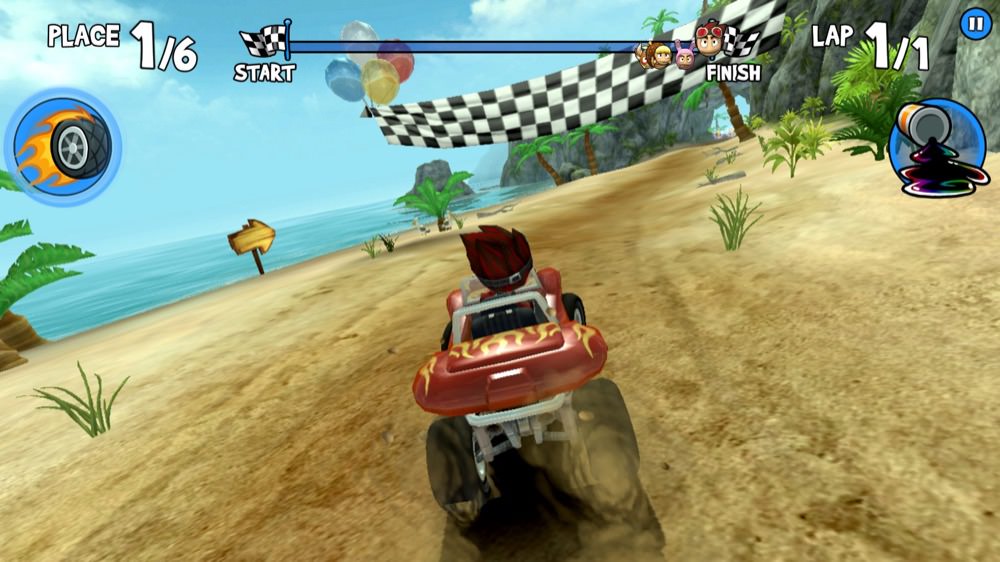 Control of your buggy is either via tilting the phone or using touch controls, according to taste. Traction/skidding is pretty realistic, or at least as realistic as you'd need it to be in an 'impossible to die' arcade title. Get things wrong completely (e.g. crash into a wall) and the worst that happens is that you're 'reset' and back on the track... 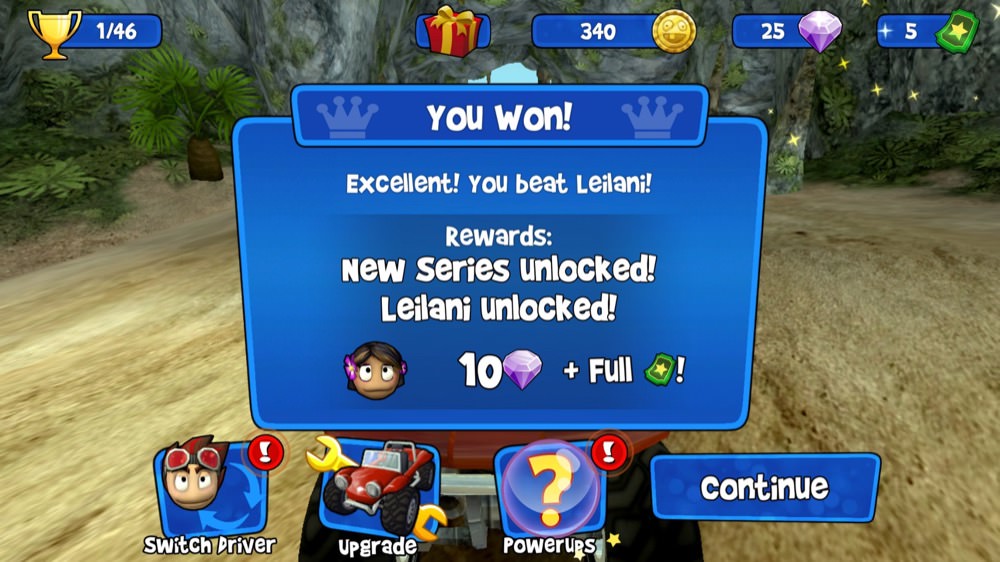 Beating an end of series 'boss' competitor. Get it right and you're stocked up with everything needed to progress. Fail too often, run out of green 'entry tickets' and you've then got some three minute waits for 'free' tickets or else start ramping some of the sensible-ish freemium purchases. 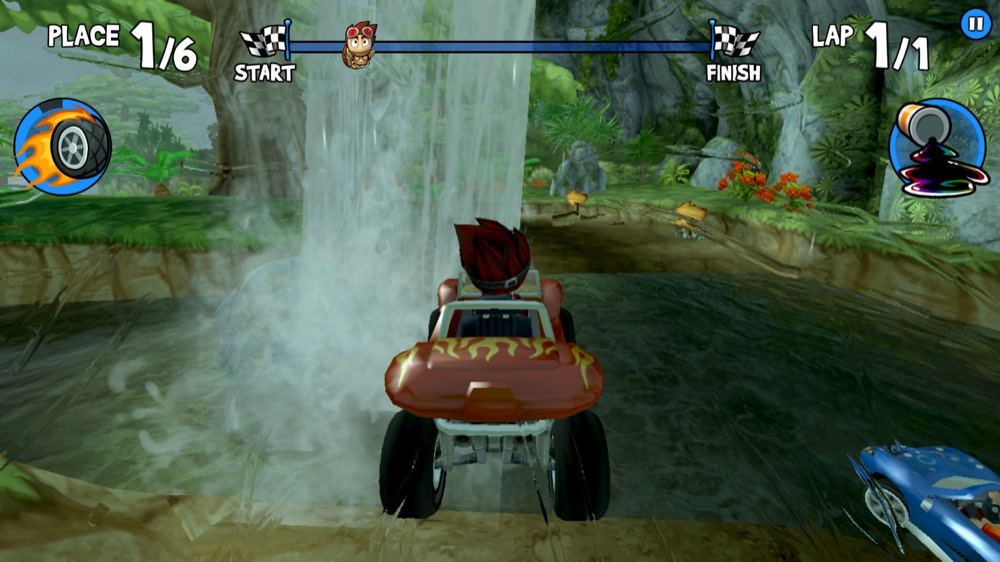 The 3D effects are impressive, with waterfalls, rain, mud, evening lighting, and more... 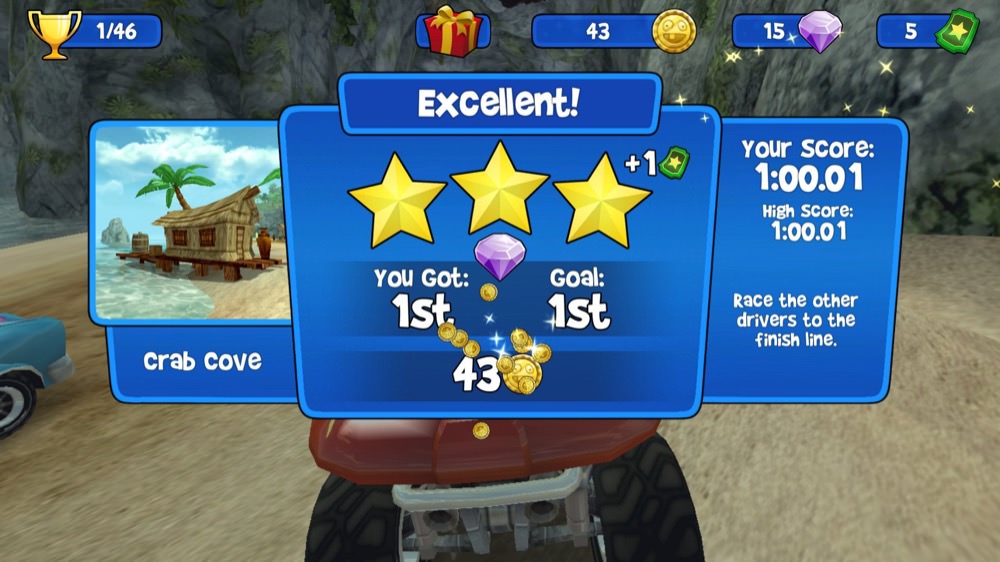 Keeping on winning is the best way to progress, of course, and if I can do it then so can you....! 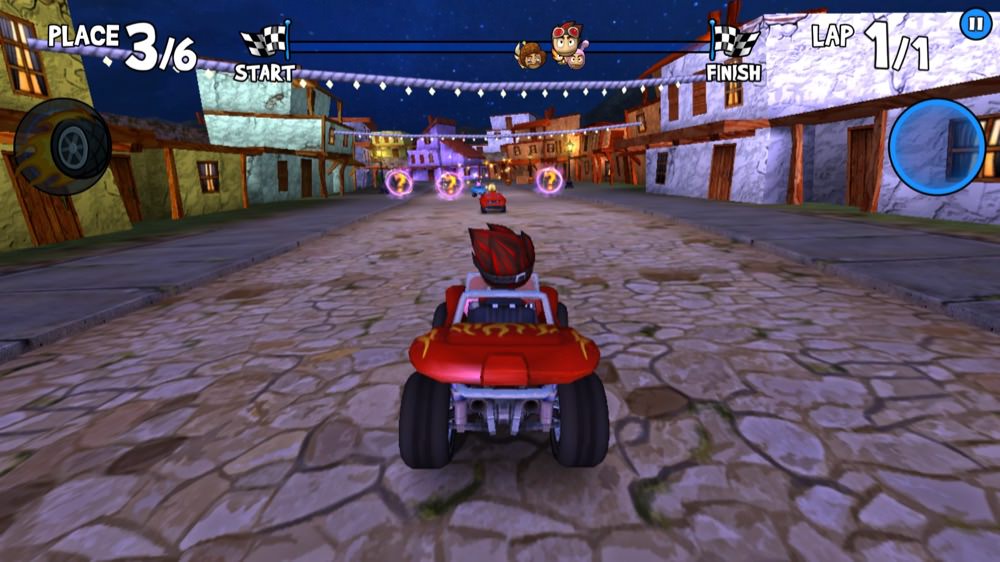 Racing at night. Oh, and note the frequent power-ups, just drive through these to acquire them, ranging from missiles to speed-ups to invulnerabity, and so on.... 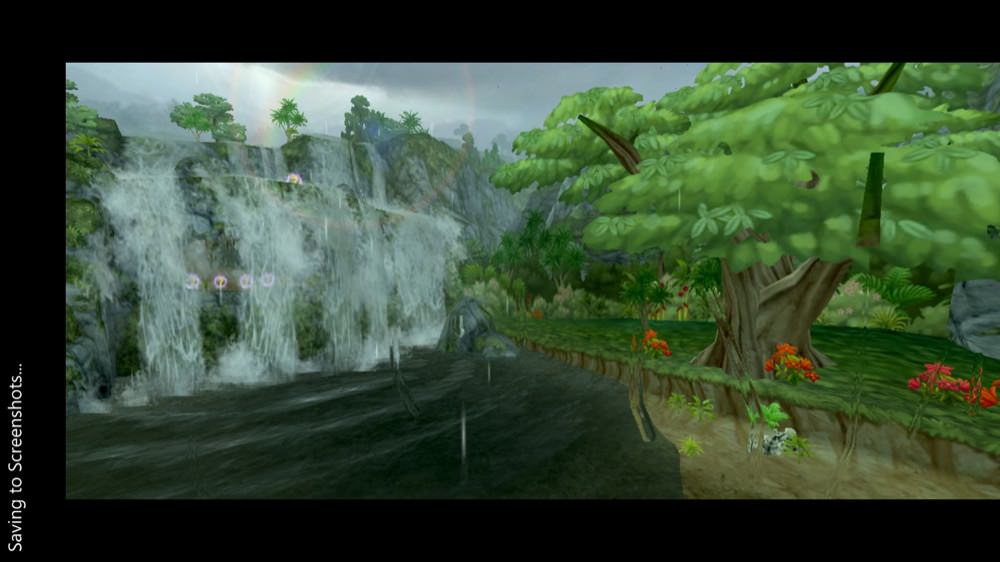 More 3D rendered water, well played those developers... On beach scenes, you also get to see the ocean lapping at the shore! 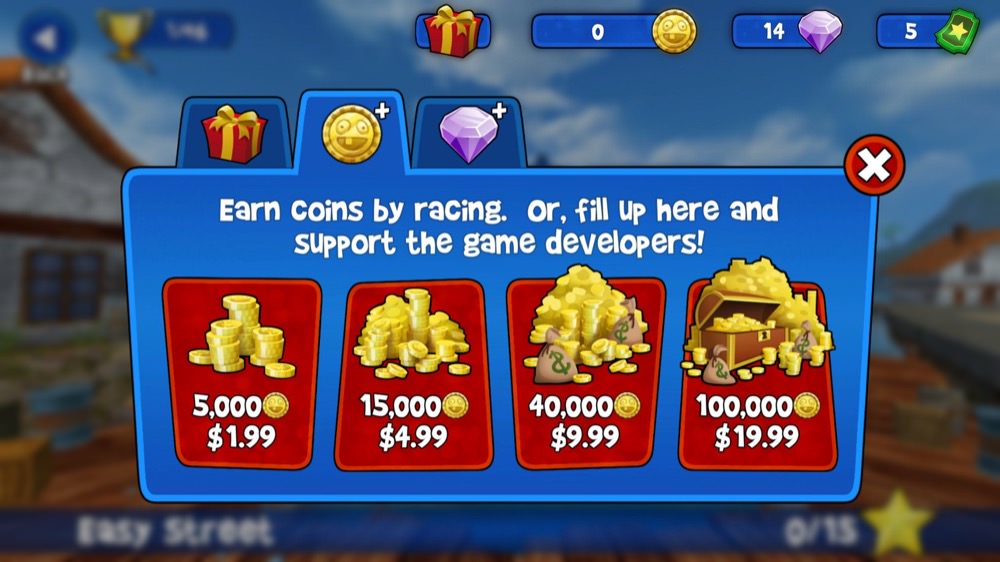 Starting to stock up on my currencies - the biggest freemium purchase here is $20, so about £12. Which, if large, isn't totally outrageous, along the lines of some of the (hateful) Gameloft titles. 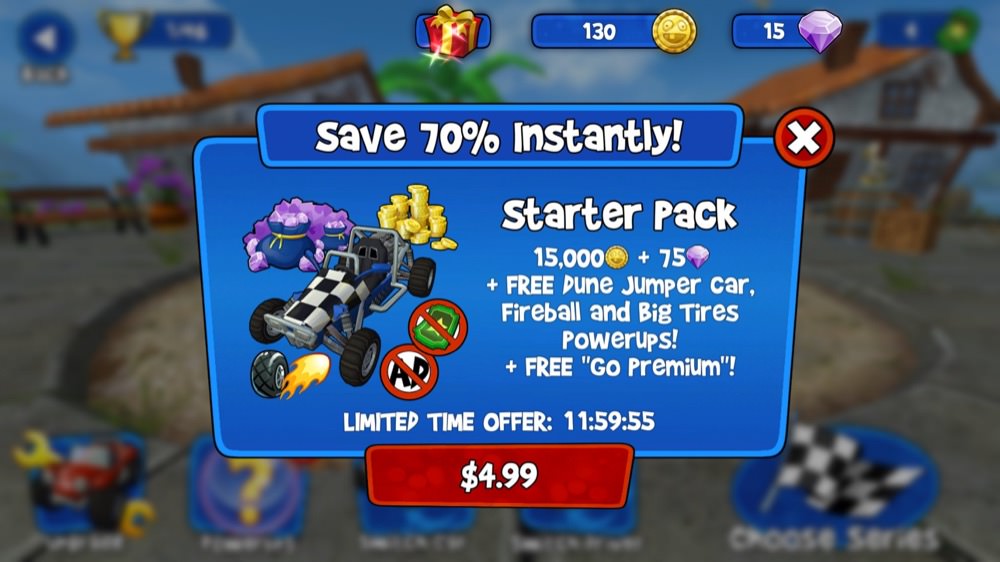 Ad-hoc offers give combinations of coins, gems and power-ups - and are decent value. Here, 15,000 in coins and 75 gems will keep you going for many hours of gameplay.... 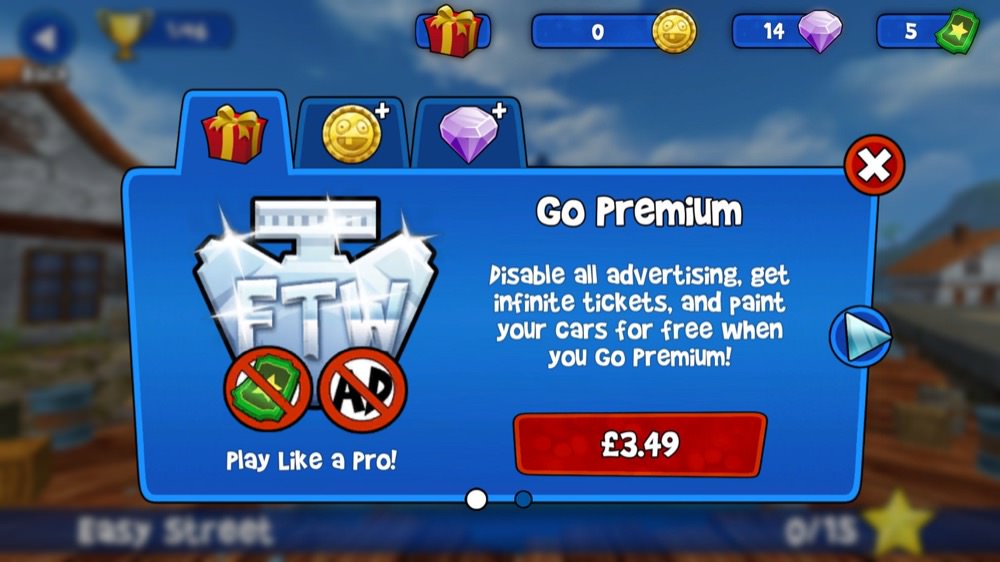 Another freemium option - it's a little confusing, to be honest, with various deals and various stages, and in different currencies! But none of them are too outrageous.

The developers certainly do everything they can to encourage you to spend real money, but in this case it's worth it - Beach Buggy Racing is well (lovingly) crafted, well pitched and addictive to play.