File this with a huge pinch of uncertainty - not because I'm not sure if it's an app or a game (it's both) and not because it doesn't exist, but because Minecraft is a whole other industry in itself. There are multiple clients for multiple platforms, there are thousands of web sites dedicated to it and.... most people playing it are under 18 years old. Making me several generations away from the target audience. However, it's now out and it runs on 512MB RAM Windows Phones, so teenagers can join in the blocky world to their heart's content.

From the Windows Phone Store, here's the info on Microsoft's own Minecraft client (remember that it owns the development studio - in a similar way that it owns Skype):

Welcome to Minecraft: Pocket Edition! Minecraft is a game about placing blocks and going on adventures. Pocket Edition includes Survival and Creative modes, multiplayer over a local Wi-Fi network, infinite worlds, caves, new biomes, mobs, villages and lots more. Craft create and explore anywhere in the world so long as you have hands spare and battery to burn. There’s never been a better time to enjoy Minecraft on the move.

I won't insult Minecraft players by trying to take my own baby steps in the world, so see these promo images instead: 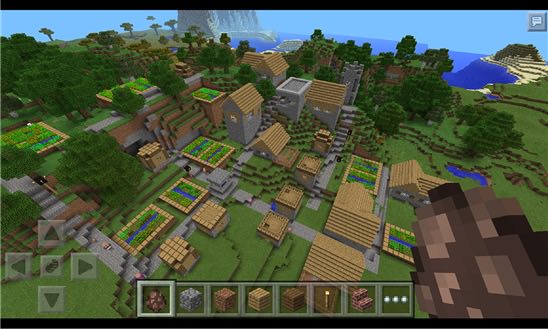 Swooping down on a filled out Minecraft world - note the building blocks toolbar, so you can leave your mark... 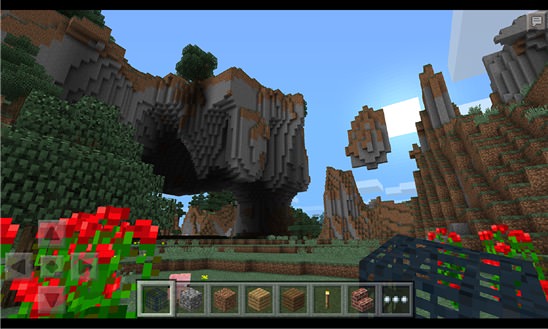 Yes, everything really does look this blocky - this is how it works! 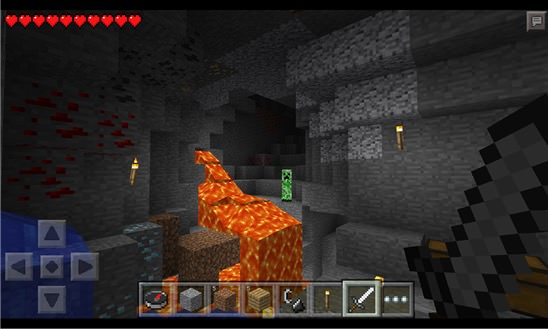 Don't expect to create moody caverns yourself on a phone - these creations have taken skilled block artists many tens of hours on a big screen!