Ah, after other recent freemium disasters, here's it done absolutely right. Not only can you have a lot of fun without paying a penny, when it does come time to want to upgrade in Demolition Derby: Crash Racing and to remove the ads, the in-app purchases are very modest indeed. Meaning that there's a heck of a lot more chance users will use them. There's a lesson here for other freemium game publishers....

Smell the petrol fumes and enjoy the carnage!  Some of the awesome features of this game:

You get the idea, it's a car racing game and yet there's not much racing, it's all about positioning your car in such a way to inflict maximum damage on your opponents' vehicles. Oh, and don't worry about the mess, a JCB trundles on after every round to lift off all the mangled metal... 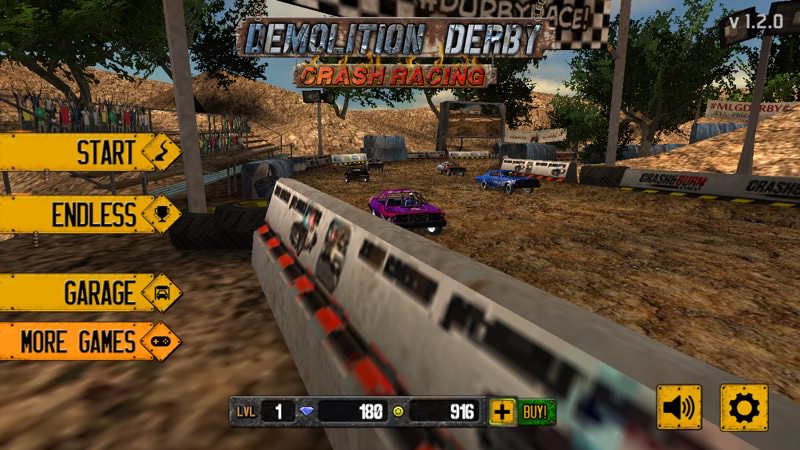 It's polished 3D from the start, with rendering going on even on the front menu - very impressive! 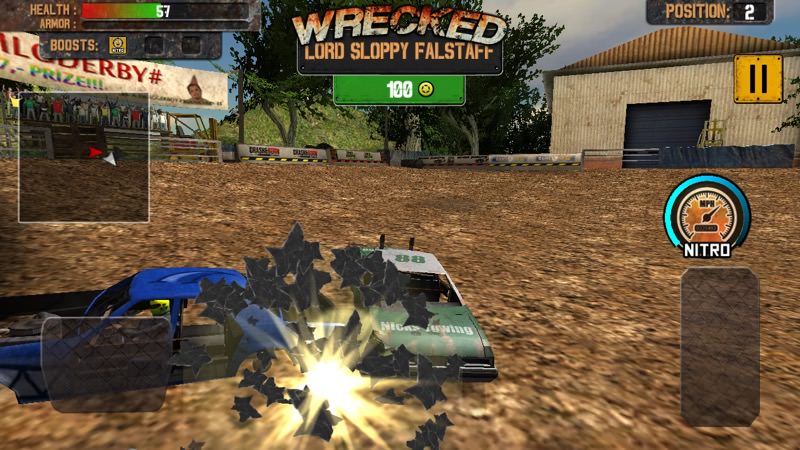 Once underway, there's a choice of control mechanisms, but it's essentially careering around building up speed and then looking for somebody to crash into! The damage model ensures that parts fall off and gradually get damaged, and the last car working wins. Easy, eh? 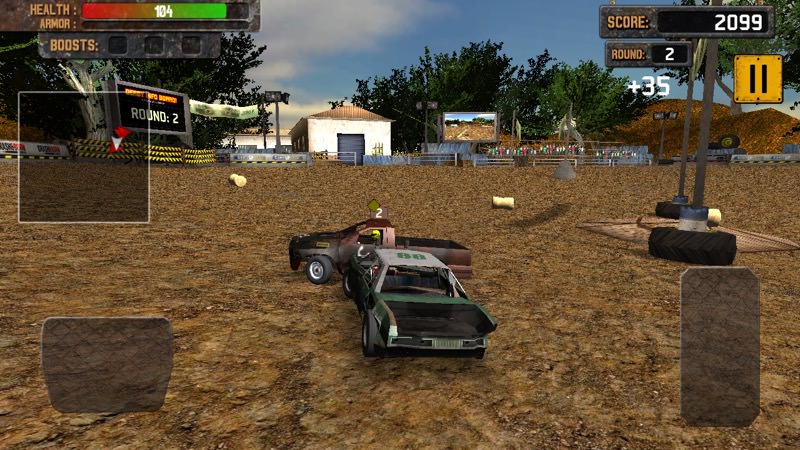 Naturally the best way to inflict damage is to hit an opponent side or rear on. Pity there's no first person view through the cab, but you can't have everything... Also, note the 'radar' view, which helps line up your next 'kill'! 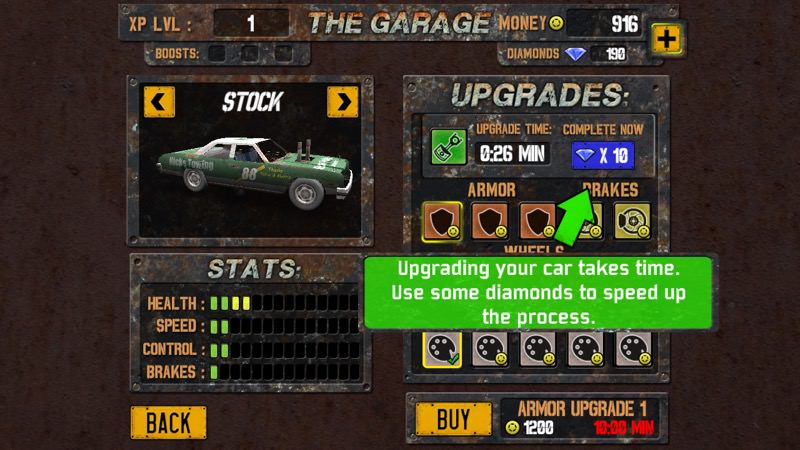 As you'd expect in a freemium title, you can start upgrading all aspects of your car - at least once you earn money or buy it with real world cash. 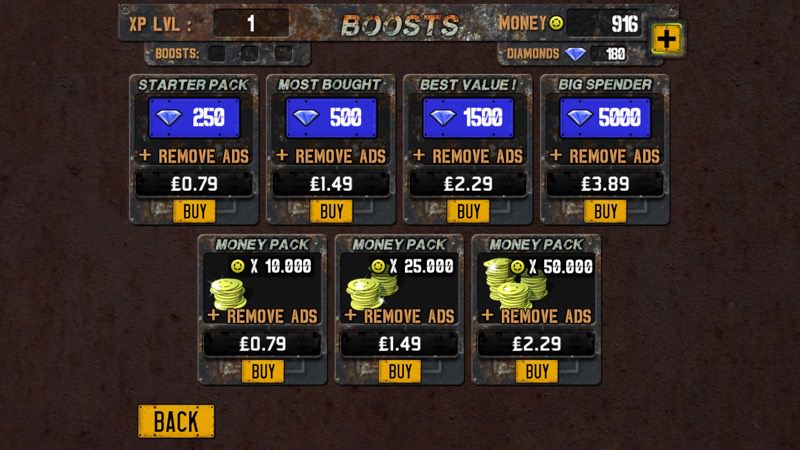 However, unlike other offending freemium titles, here everything's sensible and well within reach. Even a heavy gamer might only rack up £5 or so, which is spot on. Perfect. Well done, developers (Lunagames)! 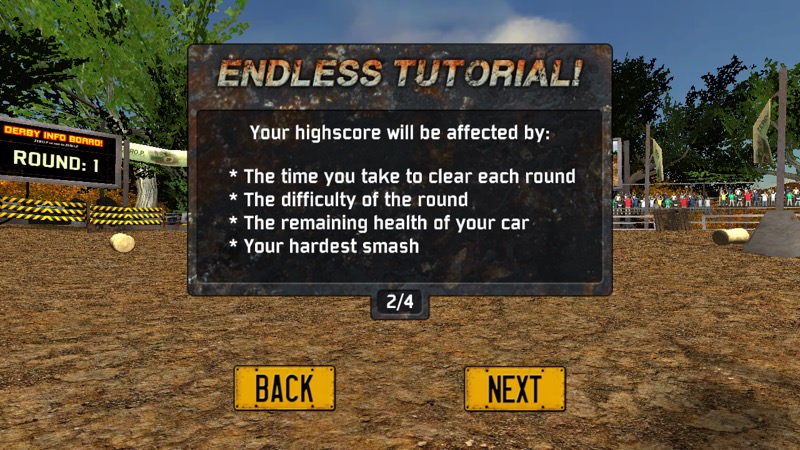 In addition to a career mode, there's also the high score-based 'Endless' mode, in which you gain back 25% repairs at the end of each round and have to keep going for as long as you can. Pick up more than 25% damage each time and you'll gradually be out of action, in which case it's finito.... 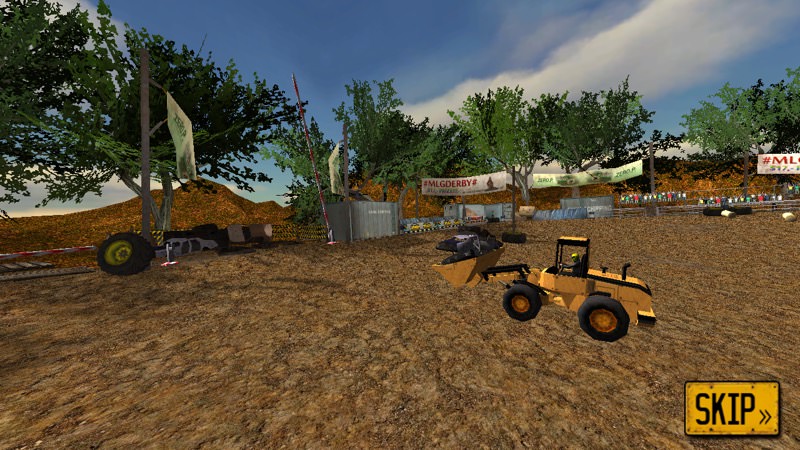 And here's that JCB. You also get to see a fork lift which lifts track barriers out of the way at the start of each round. All very well done, and lovingly rendered throughout.

Recommended. You can grab this 60MB download here in the Store.