Blaming changes on a 'small number of users' taking advantage of the 'unlimited' cloud storage in Office 365, Microsoft is planning to scale back OneDrive storage options for 'early 2016'. There's (up to) a 12 month grace period for anyone affected by the reduction and few should be affected in the short term, though new Microsoft account users through next year will only see 5GB for free. See the quoted details and my comments below.

Since we started to roll out unlimited cloud storage to Office 365 consumer subscribers, a small number of users backed up numerous PCs and stored entire movie collections and DVR recordings. In some instances, this exceeded 75 TB per user or 14,000 times the average. Instead of focusing on extreme backup scenarios, we want to remain focused on delivering high-value productivity and collaboration experiences that benefit the majority of OneDrive users.

Here are the changes:

We’re taking the following steps to make this transition as easy as possible for customers:

OneDrive has always been designed to be more than basic file storage and backup. These changes are needed to ensure that we can continue to deliver a collaborative, connected, and intelligent service. They will allow us to continue to innovate and make OneDrive the best option for people who want to be productive and do more.

The grace period is lower than a year for non-Office 365 users, importantly:

If you have a free OneDrive plan and will be over your storage quota as a result of these changes:

So it probably makes sense to review what you're using  OneDrive for, perhaps as a New Year's resolution? As a user of Office 365, I'm not affected in any way, but I thought a screenshot of my current allocations would help show how many AAWP readers' entitlements may have grown: 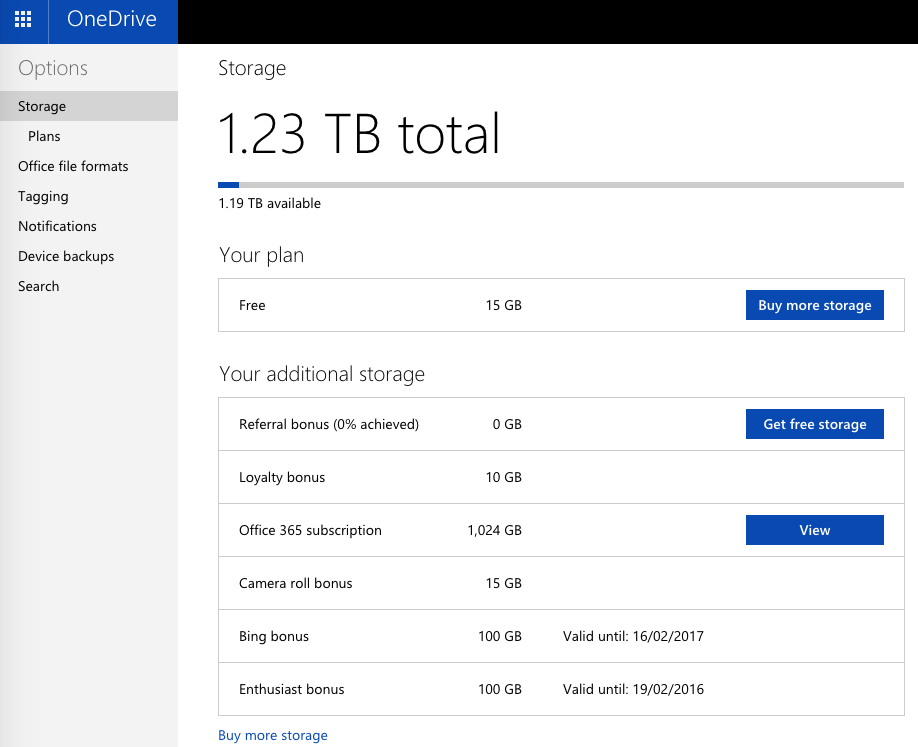 So that initial 15GB will reduce to 5GB. There's no mention of what will happen to the 'Loyalty bonus' that many of us got as early adopters, so maybe that stays. The Camera roll bonus is being dropped but Microsoft's pages make no mention of what happens to people who have already been awarded this.

Ditto the 'Bing' and 'Enthusiast' bonuses. OK, so perhaps I've overdosed on one too many Microsoft OneDrive offers! These are of limited duration anyway, so I'm guessing these stay in place until they expire.

There's some extra information can be found at the FAQ, though overall I find myself puzzled. If all of this was caused by some users abusing the 'unlimited' option (when everyone knew it was really 1TB), then why not just cap these miscreants at a Terabyte and be done with it? How on earth does inconveniencing the 99% who are not really causing any server problems help solve an easily-fixed problem caused by the other 1%?

Comments welcome - will any of this affect you? I realise that Microsoft needs to not lose too much money on Cloud storage and that $2 a month for 50GB extra isn't going to break anyone's wallets, but this set of storage tweaks seems liable to just cause bad feeling all round, not least from people who jumped on board the ecosystem under the 15GB-free deal. And right now, Microsoft needs all the friends and customers it can get.