Editing smartphone-shot video on a Windows PC has rarely been without quirks. There are the major commercial editing systems of days gone by (represented here by Pinnacle Studio 19) and then there were 'lite' utilities like Windows Movie Maker. The latter seems to have passed away in the Windows 10 age, but remembering that the excellent all-purpose Nero suite for Windows used to have a reliable (if limited) video editing facility four or five years back, I headed for the latest edition of Nero too - and found that Nero Video/Vision is now all grown up.

Oh, before you accuse me of selling my soul to commercial software, note that I did a lot of research into the dozens of various freeware and shareware alternatives, but didn't find any that weren't either a) buggy, b) nigh on impossible to figure out, c) too limited to be of any use, and d) infested with adware and other nasties. So commercial it is, with Nero Video 2016 available from 24 Euros (sold from Germany) and Pinnacle Studio 19 starting at £40-ish (in the UK), so neither exactly break the bank considering the amount of sophistication on-board.

Commercial video editing used to start at £100 and go up through the roof from there on, but it's a LOT cheaper these days and, considering the amount of time you'll both spend and save in terms of relatively gentle learning curves, there really is little reason to spend tens of hours fiddling with a tool that's really not fit for purpose when a little outlay will see you getting on with your life much more quickly.

I should explain that my goal was to emulate a typical smartphone user's task of collating captured 1080p video in MP4 files, imported via USB or (as a last resort) backed up and then downloaded via OneDrive or similar, then trimming them, overlaying and inserting stills, adding titles and then exporting at full resolution and quality to both:

In each case, I was looking at speed, interface intuitiveness, raw functionality, rendering speed and issues and quality of the final result.

I should also add, for those wondering, that I also tried Adobe Premiere Elements 14, since this seemed to be playing in the same 'home editing' space, but it proved too buggy and unstable on my test PC - this has been a common theme of Adobe software in the past. I'm sure there will be patches coming out in the medium term, but in the meantime Elements 14 was more expensive than the other two options here and patently didn't work as well - at least not yet.

I've used Pinnacle on and off over the years and the non-linear-editing interface is intuitive and familiar - just import the MP4 videos and JPG photos into the project 'bin' and then drop them as required into the multiple layers of AV in the timeline. Overlays, audio-ducking and more are handled smoothly, and I especially liked the audio display for video clips, letting you spot instantly (for example) where someone is speaking and then letting you drag a clip end point to trim it appropriately. 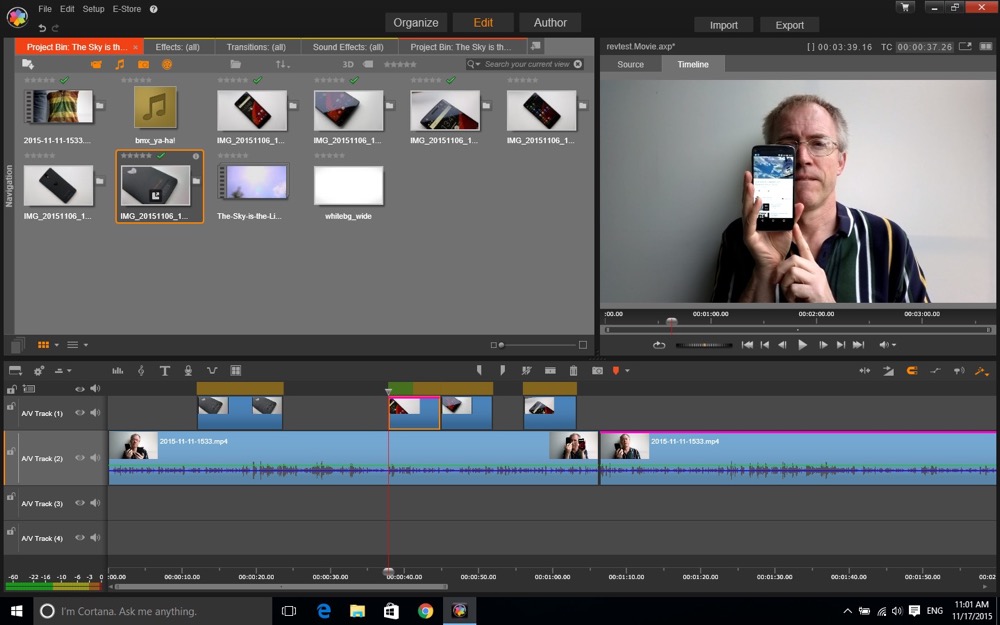 There are around 1000 (yes, a thousand!) visual effects that can be applied to clips and images - a nearly full screen clip effects editor pops up, though (having been used to iMovie on the Mac) the way all effects are controlled using explicit sliders and numeric fields took a bit of getting used to - whatever happened to using the mouse on-screen?

As clips and overlays are added, as effects are tweaked, video is pre-rendered in the background, with a green 'processing' shade nearly always visible - until this is complete for each element, previewing isn't really possible and this does get in the way sometimes. Given time though, rendering out was perfect and the DVD creation tools here are also top notch. There's a lot of maturity in Pinnacle Studio 19 and it shows.

Which is not to say that you shouldn't pause before considering it. Not because of price (it's a bargain) but because your current Windows PC might not be up to it. I was 'only' working at 1080p but my 32-bit Windows 10 system with 4GB of RAM struggled in terms of performance, with numerous 'blue circle' cursors (indicating that the app was busy and that I should wait). Despite this spec being well within the 'minimum' as detailed by Pinnacle, I'd go with the 'recommended' spec of a 64-bit system with 8GB or more of RAM. Really. In which case the biggest expense by far will be upgrading your PC or even buying a new one. Ahem.

There was the odd glitch too - for some reason Pinnacle Studio 19 kept jumping into full-screen mode and then back completely at random - I couldn't see a reason or find a setting to control this. Just bizarre. And yes, my Windows 10 and Pinnacle Studio itself were patched up to date. I also found it odd that projects aren't saved as you along, so if there IS a crash then you're at the mercy of any 'recovery' code. These notwithstanding though, and assuming that your PC is up to the task, I found Pinnacle Studio 19 thorough and extremely competent. It may not be the most elegant video editing system, but it's always obvious what is happening - and that's half the battle.

A very different beast to Pinnacle, above, Nero's video editor (usually found as part of one of the Nero media suites, but often available separately) has always been relatively lightweight and somewhat wizard-based - and a lot of this is retained, with 'Start here', 'Next' and 'Burn'/'Export' workflow rather dominating. But the core video editing section, where you combine clips, overlays, effects and more is well done. It's true that you don't get to see a mass of regular thumbnails nor audio waveforms, so trimming video is a little hit and miss, but everything slots into place and is preview-able immediately. 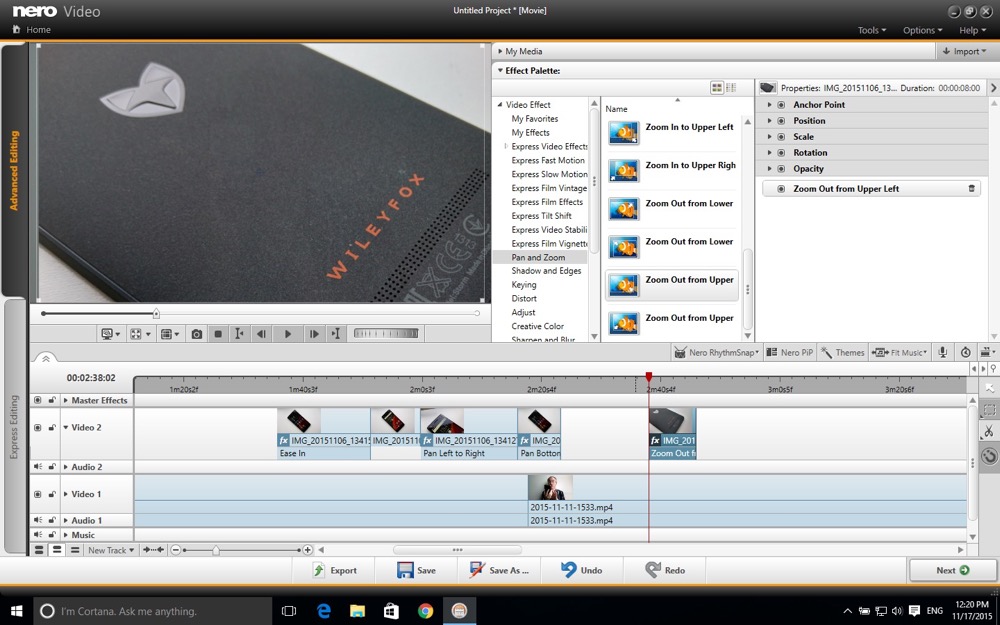 There's an option to turn on 'background processing' to improve previews, but this didn't seem to make much difference on my test hardware - there were no delays in either case and I sped through the editing process very quickly indeed. Splitting video clips is done in a completely different manner to that described in the online manual - which is bizarre - but I found the appropriate scissor tool in the end. Adding any of the hundreds of effects is very easy, as each comes with dozens of presets - just choose the one you want and drag and drop it - with a little luck you'll never have to enter numbers or percentages to customise one of these.

The hierarchy of the mini-suite does come back to bite though. For example, if you opt to step forward in the wizard-like process to DVD creation then all your nice 1080p MP4 footage gets downgraded to 480p permanently (ok, you could re-import from your original files, but it's still annoying). So if you plan to export to file and then DVD then you have to go in the right order!

The range of export options is generally good and results were rock solid, though yet again there's no auto-save. Haven't these video editor manufacturers ever heard of applications crashing?

Ultimately, how you edit your smartphone-shot video on a Windows PC is determined by your budget and equipment to hand. If your PC has 8GB (or more) of RAM and is 64-bit and relatively new then knock yourself out and go with Pinnacle Studio 19 - it's an all-in-one approach that will do everything, from creating a DVD for the grandparents right up to pro-level editing for broadcast use. If your machine is slightly slower in spec (for example, a laptop) and with 4GB of RAM - or if you just want to pay quite a bit less - then go with Nero Video 2016, you'll have a fast and smooth workflow to file or DVD that will get the job done with no hiccups.

And if your PC has only 2GB of RAM then.... you need to upgrade or replace it! Or consider editing on the phone itself if your goal is YouTube - the chipsets inside smartphones these days are often faster at handling video then all-purpose Intel chips inside PCs, amazingly.

Comments welcome - hopefully the mini-reviews above have proved useful. What do YOU do, as a Windows user, when your mum, dad or grandparents say, at a family event that you're shooting on your smartphone, "Can I have that on DVD please?"