Well spotted MSPU, looking at some of Microsoft's Gabe Aul's tweeted replies to user questions. As hoped, it means that the factory images for Windows Phone 8.1, applied with the Windows Device Recovery Tool, will be kept online indefinitely for those devices which started life under 8.1. So, even if a user does opt into Windows 10 Mobile and upgrades, they'll still be able to 'downgrade' again later. No doubt with plenty of spinning gears and restoring of backups, but the key point is that the original 8.1 images won't be taken offline.

Microsoft may have released Windows 10 Mobile to eligible Windows Phones in March, but both users and Microsoft alike know that the update isn’t as solid as previous iterations. Some users have reported bootloop errors, others just don’t like the general change in direction , and in particular the loss of some apps like Lumia camera and Lumia panorama which extended devices like the 830 and 930.

Unlike Apple, Microsoft is allowing its users make a choice for now. Users can update to Windows 10 Mobile on selected devices (Lumia 540 and similarly specced), or they can stay on Windows Phone 8.1 indefinitely. 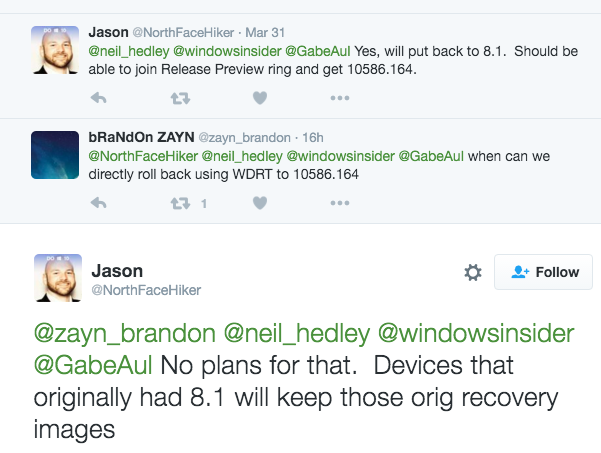 If they try Windows 10 Mobile and decide they prefer the different Windows Phone 8.1 experience, then the door to Windows Phone 8.1 is left open. This is different from how Microsoft traditionally handled Windows Phone updates, with the new update being pushed out to the recovery tool as soon as it became for older devices.

However, Windows 10 Mobile is an entirely different beast in scale compared to Windows Phone 8.1 Update and Update 2. With that in mind, some users may actually prefer the design and usability of Windows 8.1 over Android, iOS and Windows 10.

The only major disadvantage to this procedure is that should a Windows 10 Mobile user need to restore to an earlier build of Windows 10, they will need to go back to Windows 8.1 and download 2 updates to bring them up to speed (at least for now).

The full MSPU article and quotes are here.

All well and good, I don't think it's very likely that a general user might want to go back to an earlier build of Windows 10 from the latest - such jumping and tweaking is normally reserved for Insiders, and they're very used to going through multiple stages in one go (e.g. down to 8.1 and up again?)

Good to hear that the option to go back to 8.1 will always be there for older devices anyway. The next question (for me) is how long the provisioning will be left in place for the non-approved 8.1 devices (e.g. Lumia 920, 1020) to still go 'up' to Windows 10 Mobile Threshold. I'm investigating this and will report back!