As widely noted around the tech sphere, PCWorld spotted a slimmed down Elite x3 at the back of the HP stand at MWC 2017. It's clear that HP itself wasn't ready to announce it, merely saying "this is an example of how we see future iterations of the x3 platform." Most guesses point to this new device being a candidate for 'consumer' release, with updated internals, though don't hold your breath for networks/carriers to come onboard - despite the slimmed bezels this is still 'business' looking and not aimed at the man in the street. Still, with a newer chipset, lower weight and better camera, who here wouldn't welcome it?

From the PCWorld article: 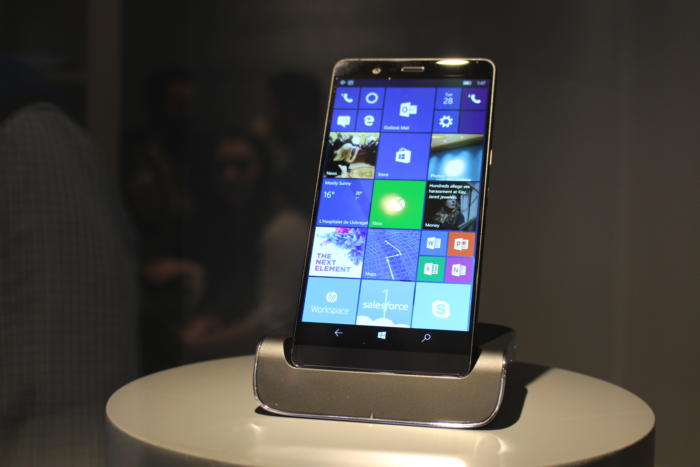 Credit: Melissa Riofrio
The future of HP’s Elite x3 Windows phone made a quiet appearance at Mobile World Congress in Barcelona. The company publicly showed off new accessories for the current model, which is barely a year old and still busy setting itself up as an essential business tool. Meanwhile, tucked into a glass case near the back of HP’s booth with no labels of any kind, a large phone, nested in the existing Dock accessory, spun slowly on a small platform.

In this concept for the HP Elite x3, the back panel looks about the same other than sporting HP’s new logo. An HP spokesperson confirmed, “this is an example of how we see future iterations of the x3 platform.” No further information was provided.

This phone is a concept that we couldn’t touch or discuss... Frustratingly, we don’t know how this model will evolve toward the final version. But the fact that there is a concept shows that while many think Windows phones don’t have a future, HP seems to think otherwise.

It's tough to gauge dimensions from the photo, but I'd guess at the same 6" display in a narrower and thinner form factor, with money saved on a single speaker set-up and removal of the rear pogo pins. Part of the reason for the delayed launch might be that the Snapdragon 835 chipset, allied here to 6GB RAM, I'm guessing, still isn't available commercially and that Samsung seem to have tied up the initial batches anyway.

So my take is that this will be launched in Q3, tying in with 'Redstone 3', aimed at business professionals, and with extended Continuum features/abilities. Comments?