At Computex 2017, Qualcomm has been showing off their 'Windows 10 on ARM' prototype ultra-mobile PC, in a form factor that's smartphone/phablet in principle, though obviously heavily 'proto' in terms of build and thickness. All very interesting in terms of what might come into production in 2018 in the mobile space. Perhaps the new Composable shell will look like Windows 10 Mobile on 'phones' and then, when plugged into Continuum displays, it will resolve to a full Windows 10 desktop and then allow Win32 emulation etc.?

From the Qualcomm press release:

Consumers will get the Windows 10 experience they know and love. With Snapdragon, hardware makers can create Windows 10 PCs that are thin, light, fan-less, and designed to deliver long battery life. With the integrated Snapdragon X16 LTE modem, your Windows 10 device can support blazing fast Gigabit internet speeds for a virtually anytime, anywhere experience.

The device on display at Computex is running on our small development platform, but it’s set up like a desktop PC. We attached a 46-inch monitor, wireless keyboard, and wireless mouse, and loaded it with familiar apps like Microsoft Office and other great apps so attendees can experience productivity and entertainment on Windows 10 powered by Snapdragon. We’ve also set up a Gigabit LTE network so attendees can experience the extreme speed supported by the integrated Gigabit LTE modem.

Interesting stuff. But what about when NOT 'set up like a desktop PC'? In other words, how will this fare when set up as an ultra-mobile, as a phablet, etc? I guess we just don't know yet what's involved.

The prototype/demonstrator was interesting, as usual, shown below. It clearly has a phablet like form factor, with large touchscreen and smartphone front camera, flash and sensors, though the prototype is crazily thick. I wonder how much this could be slimmed down for production use one day? 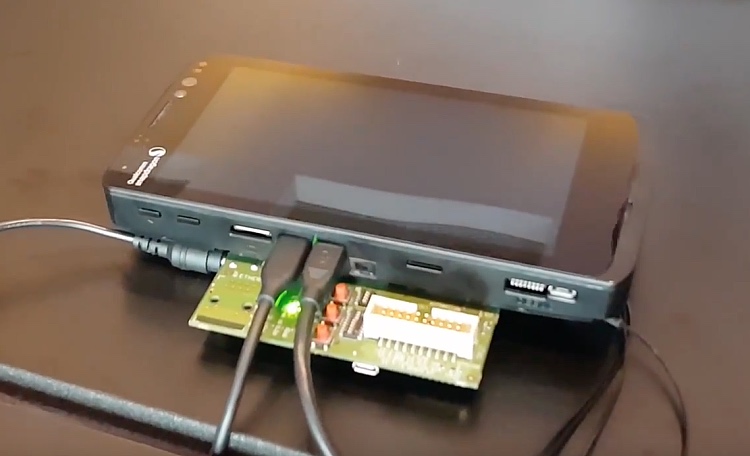 The still above is from the video embedded below, showing more of Windows 10 running on this ARM portable demonstrator: