Hands-on with the Ionic, the only well supported premium smartwatch?

Eric Zeman, over at IFA, got his hand on pre-production samples of the new Fitbit Ionic - you may recall from yesterday's story that the new Ionic is not only the latest smartwatch on the scene, it's not only arguably the fitness flagship, it's also 100% supported by Windows 10, including Mobile. Which made Eric's opinions so far on this new wearable of direct interest. As a user of lesser Fitbit trackers, this is the logical upgrade... 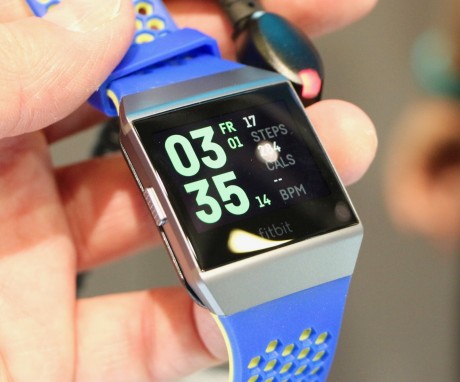 The screen is small but incredibly bright. Moreover, it includes an excellent number of pixels, meaning everything on the screen looks sharp and clean along the edges. The full color display does a fine job.

You'll notice three buttons on the wearable's side edges, with a single key on the left edge and two on the right edge. The button on the left is a dedicated mobile payment activator. A long press of the button turns on the NFC radio, launches your credit card, and can then be used to make mobile payments. According to FitBit, it relies on the same mobile payment standard as FastPass and other NFC readers at payment terminals. There's nothing like "FitBit Pay" involved here. The button is rather stiff, but it has a fine profile.

I'll be darned if I can tell you what the buttons on the right edge do. Ostensibly, the top one opens the main app menu and the bottom one takes you back a screen, but that was not my experience with any of the units on hand in Berlin. None of them functioned properly, which I'll chalk up to pre-production bugs. At least the buttons are easy to find and use.

The Ionic makes use rubber/vinyl straps, though you can swap them out for straps from FitBit that resemble (but probably aren't) leather. The straps are proprietary, so you'll have to get your straps from FitBit directly rather than the 22mm bands at your favorite watch store. I liked the sporty look of the rubber straps, which have vent holes for those extra sweaty workouts. The straps are tough enough and close with a standard buckle.

FitBit placed a number of sensors on the bottom of the watch, including the optical heart rate monitor. The magnetic charging pin is on the bottom as well, and attaches to a charging plate that's included in the box with the wearable.

FitBit sealed the Ionic up tight and it is water resistant to 50 meters. It can handle swimming workouts in the pool, but I wouldn't wear it into the ocean. GPS is inside to help track your runs, walks, hikes, and bike rides. According to FitBit, the mobile app (for Android and iOS) and Ionic work together to track and sync workouts, heart rate, and other data throughout the month. The watch can help manage music playback via Bluetooth controls. The wearable has access to FitBit's app store, which includes offerings from Strava, Pandora, and Starbucks. Other features include customizable watch faces, call and message notifications, rapid charging, and sleep tracking...

See the full article for much more, including Eric's early verdict. The $300 price tag seems to be the main sticking point at this stage. I have to say that if fully supported by Windows 10 Mobile then I'd still consider the Ionic, even at that price, considering it part of the ecosystem 'tax' for an enthusiast platform - what about you?

Filed: Home > Flow > Hands-on with the Ionic, the only well supported premium smartwatch?