The issue of downloading/archiving videos from YouTube is a thorny one. Technically against YouTube's terms and conditions, we all do it occasionally anyway, usually so that we can watch stuff when offline, perhaps travelling. Google's Android is left out in the cold here, since Googe can't go against its own T&Cs, but Windows Phone and Windows 10 are the great Wild West by comparison and there are dozens of dedicated YouTube downloading utilities. They all work in much the same way, parsing the original YouTube pages to find the appropriate stream links and then offering them up directly. And, in recent times, UWP implementations have appeared for Windows 10 (including Mobile) - here's one such.

In addition to downloading media directly from YouTube, TubeGet also converts your media to a variety of formats and qualities audio/video!

And with a few caveats, TubeGet works well, though perhaps better on the desktop/tablet/laptop than on the phone: 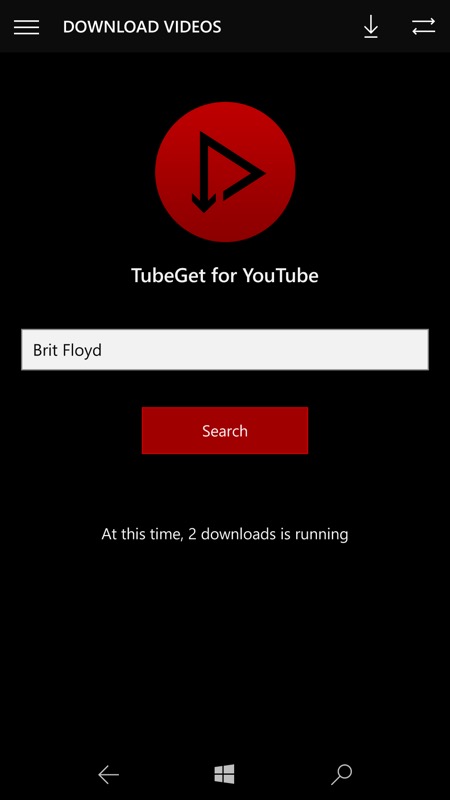 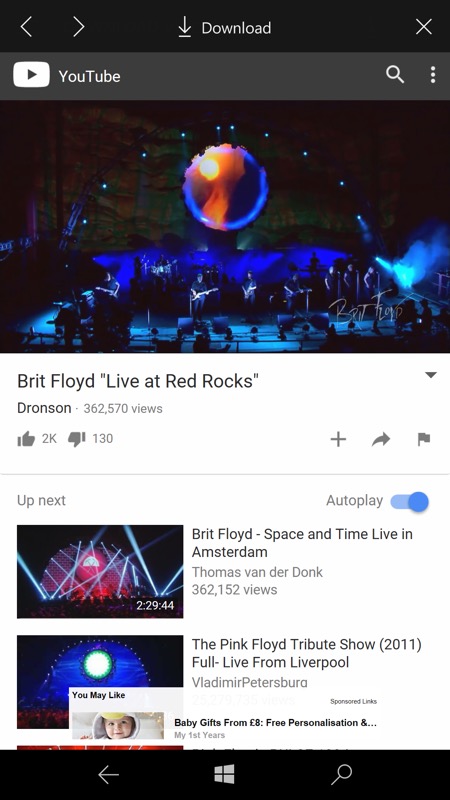 A simple UI at first glance, just type in something you're looking for on YouTube; (right) the web interface for YouTube then appears in a window, with a big 'Download' control at the top. 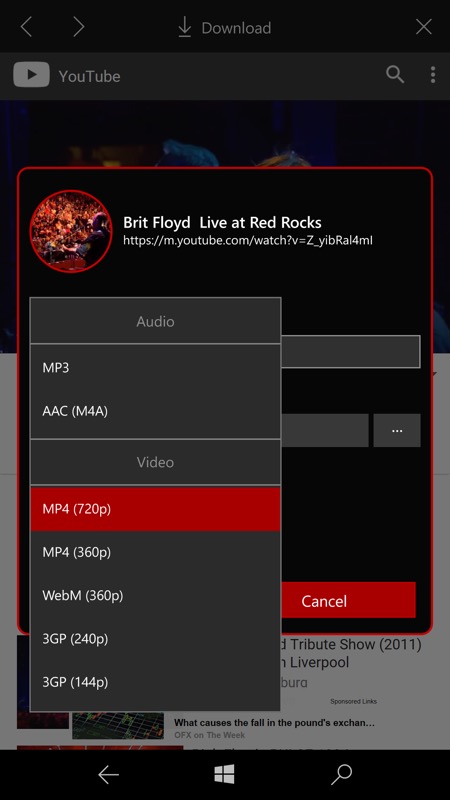 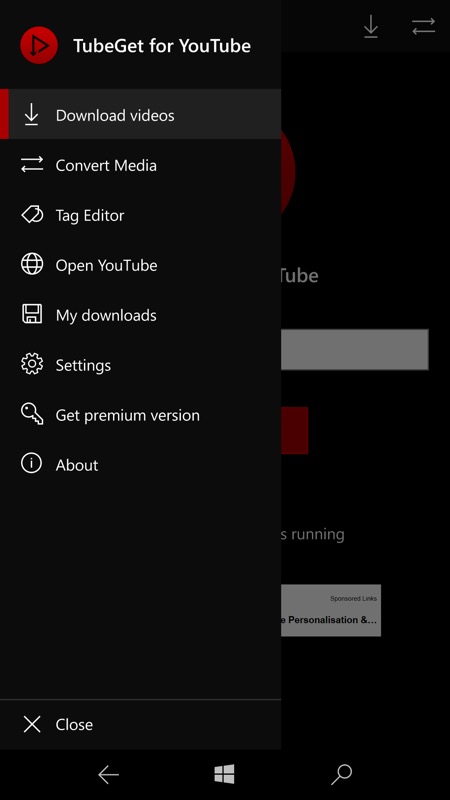 Tapping this brings up the Download form, with both audio and video formats and resolutions. 720p is good for phone-hosted video (and in fact YouTube savagely protects its 1080p (and up) streams, so 720p is all that's ever available; (right) TubeGet's hamburger navigation menu, all quite clear and obvious. 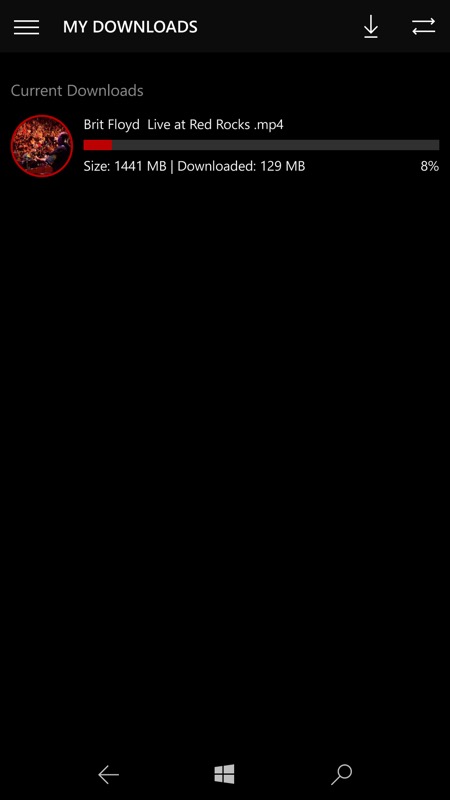 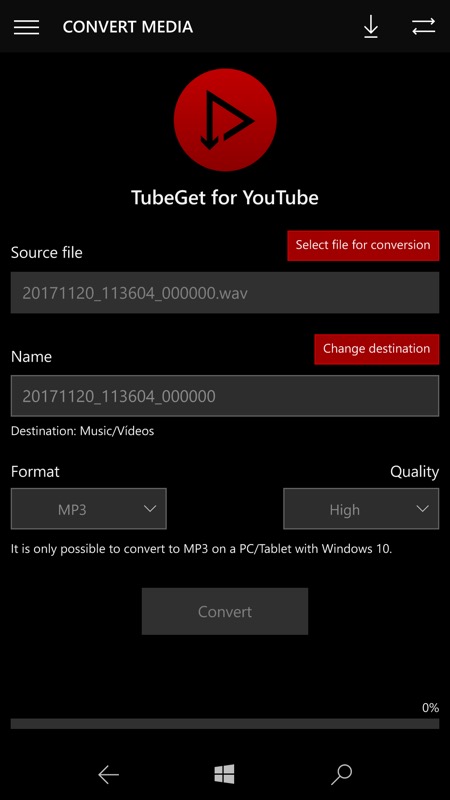 Keep track of your downloads here, though if your video is long and large (as here) then you need to stay within TubeGet, since I found that my downloads vanished if I switched away to something else. This might be a limitation of the downloading mechanism, but I'd like to see things carry on in the background on Mobile - they do on the Desktop! (right) A handy media conversion tool is built-in, here converting a WAV file to MP3. 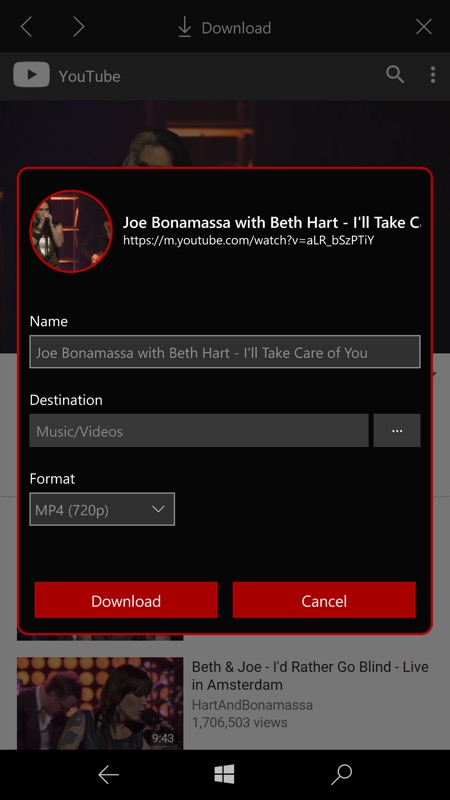 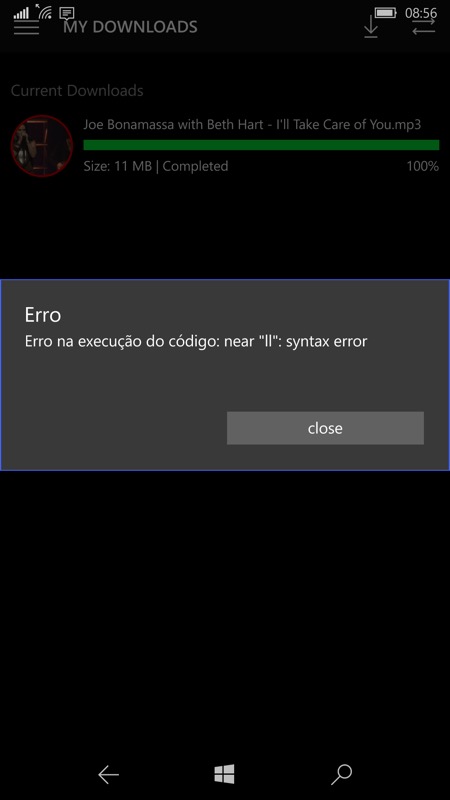 Given the slightly 'grey' nature of downloading YouTube videos, it's a wonder that it all works most of the time. I had my fair share of errors though - usually 'Can't prepare media for download', but occasionally the message above right.

Ignoring the caveats and issues, this still works well enough to keep around - after all, you'll only be doing this once in a while. For the longer videos shown, I did find it easier and more reliable to use TubeGet on my Windows 10-powered Surface Pro. After all, having bought the in-app-purchase on Mobile, it's all equally applicable on the Desktop, plus the latter has a more stable environment (power, connection, etc.) for handling long downloads. The joy of the Universal Windows Platform!

You can grab this here in the Store. A few of the features (such as MP3 conversion) are part of the in-app-purchase, but it's only a couple of pounds.