A year ago, I reviewed Slack (Beta), a WinRT 'universal' app for Windows Phone 8.1 and above - it worked, but wasn't exactly optimised for anything, wasn't a true Windows 10 app, and showed a distinct lack of care and attention. The hope was that Slack would continue development, but this never happened in terms of functionality and now the company says that future development is very definitely over.

Given that there's a very capable x86 Windows 10 version of Slack and given Windows Phone and Windows 10 Mobile's trajectories, this isn't really a surprise - I imagine it would have been quite a lot of work getting a full UWP version of Skype out - for not much gain in terms of business presence.

Anyone updating Slack in the Store now will see the message below when starting the application: 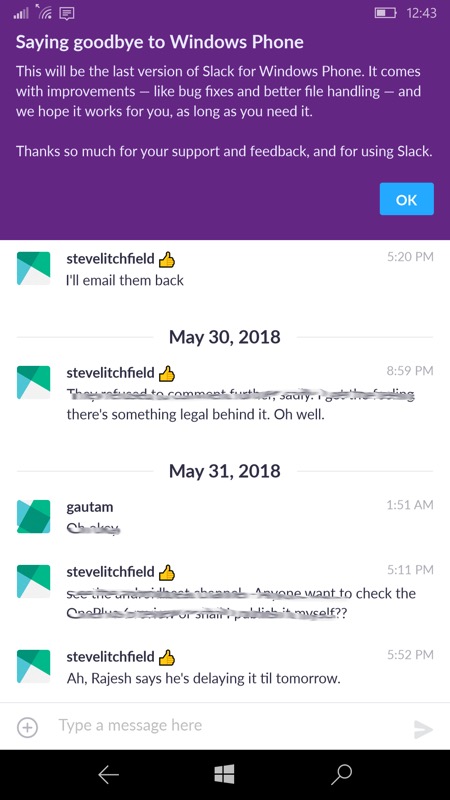 In short, Slack (Beta) will continue to work (at least, until it doesn't, at some point in the future) and will stay in the Store, but don't expect any further development. Not that many people were.... but still.

I've only used Slack (Beta) for fairly trivial involvement with a couple of businesses, so I haven't really pushed the limits and found it wanting. What about you? Any comments on the current status beyond 'it's always a been a bit slow'?