Microsoft and Apple dicing it out as market leader..

For a brief moment yesterday, Microsoft was the most valuable publicly-traded company in the world (at least, as traded on the New York stock exchange). And it's still dicing with the other market leader, Apple, as I write this. Which is something positive to celebrate (especially if you have Microsoft stock) even in the context of Microsoft's comparative failure in mobile.

A steep decline in the iPhone maker’s share price over the past several weeks briefly took its market valuation slightly below fellow technology bellwether Microsoft Corp.’s on Monday for the first time in more than eight years.

Apple’s market valuation of $812.60 billion dipped below Microsoft’s $812.93 billion as of 1:05 p.m. in New York, meaning it had shed about $300 billion in value after cresting a record $1.1 trillion valuation in early October. Yet the technology behemoths continued to jockey for the top seat in intraday trading. The last time Microsoft was bigger than Apple based on market cap was in mid-2010, according to data compiled by Bloomberg. 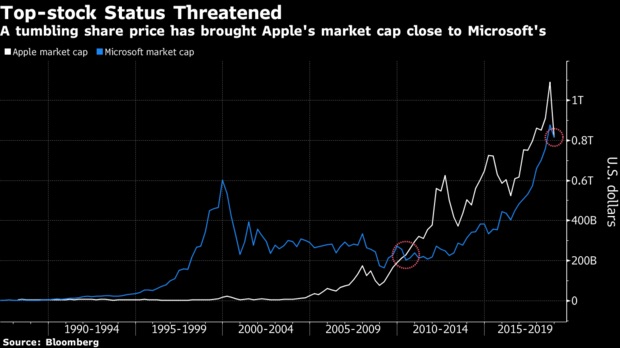 As I write this, Apple's cap is $825 billion and Microsoft's is $817 billion. For comparison, Amazon is $773 billion and Google is $729 billion. And those are just on the USA exchanges! Big numbers all round...

All very interesting, if also a little academic to the man in the street. Still, the higher the market price and the more confidence, the more likely that Microsoft will persist with projects like Surface and (one day?) Andromeda.

Still, Microsoft staples like Outlook email, OneDrive, OneNote, and Office 365 are all either free or great value, and I'm seeing the company's services used more and more on other mobile platforms.

Filed: Home > Flow > Microsoft and Apple dicing it out as market leader..