Three Thursday links of interest for you. Firstly, Microsoft is back on top as the USA's most valuable company; secondly, Windows 10 is now the most used version of err.... Windows, overtaking Windows 7; and thirdly, you can now download and try out the Python language from the Microsoft Store. A flying start to 2019?

Microsoft has not had a tremendous quarter. But it has still succeeded in regaining a coveted title: most valuable public U.S. company by market cap.

And even though Microsoft's product announcements still might not rivet the public like Apple's keynotes, the company has moved forward in measurable ways in 2018, following years of transition under CEO Satya Nadella.

Nadella's Microsoft, which has prioritized things like the cloud, open-source software and cross-platform services and has de-emphasized Windows, was arguably synthesized in a remark he offered in an interview with CNET. "You join here not to be cool, but to make others cool," he said.

It's now been one month since Microsoft captured the most-valuable-public-company title from Apple. This is the first time Microsoft is ending the year as the world's highest valued public company since 2002.

The fourth quarter hasn't been the best quarter in history for the company. (That was the first quarter of 1987, when the stock price doubled.) In fact, this was one of its poorer quarters through the years. The stock was caught up in a wider market selloff, and it declined by 11 percent this quarter.

And yet, Microsoft was discounted less than other top companies. Amazon fell 25 percent in the fourth quarter, and Apple went down 30 percent.

For all of 2018, shares of Microsoft rose almost 19 percent. It stands out as one of the top five components of the Dow Jones Industrial Average for the year. At the end of 2018, Microsoft's market cap stood at $779.7 billion as the stock closed at $101.57 per share.

Which is pretty cool, despite what many Windows Phone and Windows 10 Mobile fans will think of Satya's decisions in the last few years. At least there's momentum to do new and interesting things in 2019.

Netmarketshare has the stats that show that Windows 10 is now used by more people than Windows 7 worldwide - though it's surprising that so many computers are still on the older releasem given that feature updates and support ended three years ago and there's only a year of security patches left. Let's hope that more businesses in particular get their act together in this regard in 2019. 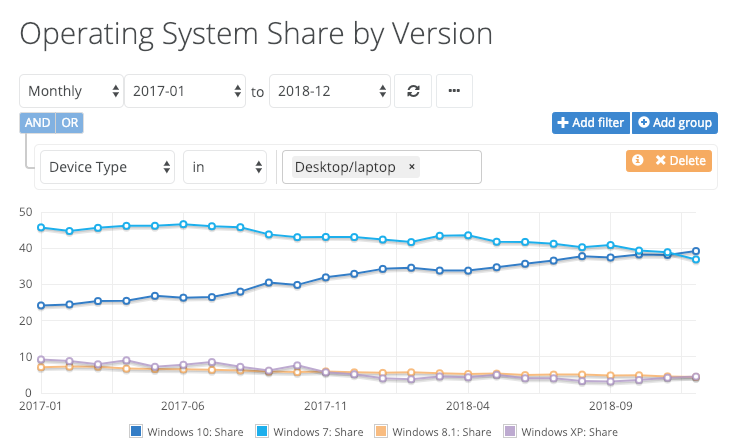 Finally, I couldn't help but link to MSPU's story on the Python programming language now being available in the Microsoft Store. Python is a great way to learn the basics of modern object-oriented programming:

Unlike most Linux and Unix systems, Windows does not include a native installation of Python. To make Python available, the CPython team has compiled Windows installers (MSI packages) for many years. Recently, the CPython team has released an official Python package in Microsoft Store. This Microsoft Store version is a simple installation of Python that is suitable for running scripts and packages, and using IDLE or other development environments.

Due to restrictions on Microsoft Store apps, Python scripts will not have full write access to shared locations such as TEMP and the registry.

Python is an easy to learn, powerful programming language. It has efficient high-level data structures and a simple but effective approach to object-oriented programming. Python’s elegant syntax and dynamic typing, together with its interpreted nature, make it an ideal language for scripting and rapid application development in many areas on most platforms.