Slightly more of a body blow to the platform than previously recognised, Whatsapp isn't (now) just to stop working under Windows 10 Mobile at the end of 2019 - it is going to be withdrawn from the Microsoft on-device Store as early as next month. The wording is 'may not be available after July 1, 2019', so its in-Store demise is clearly planned and I doubt it'll make it into the Autumn. Having said that, if it's already installed and working on your phone then there's no reason why it shouldn't carry on working until 2020. Just don't factor in a device refresh or reset, because you may not be able to re-install Whatsapp!

Here's the full wording on the Whatsapp site:

You'll no longer be able to use all Windows Phone operating systems after December 31, 2019, and WhatsApp may not be available in the Microsoft Store after July 1, 2019.

Note: Because we no longer actively develop for these operating systems, some features might stop functioning at any time. 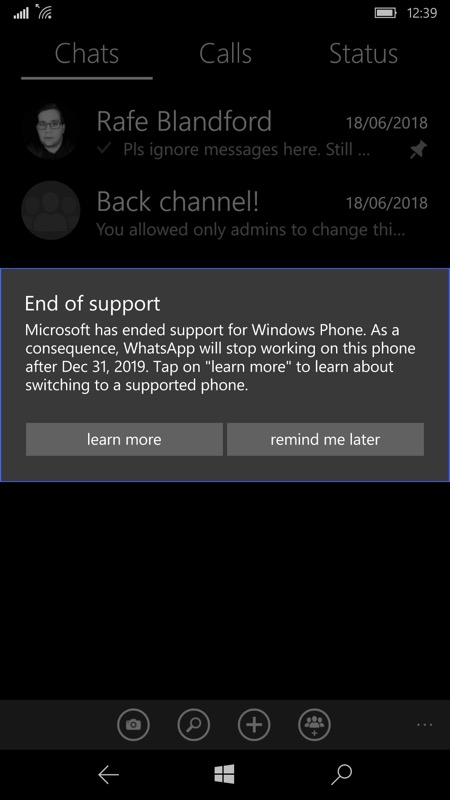 There have been rumours of a true native UWP (Windows 10) Whatsapp client, but I think we'd have had this by now if it was real. And, with Facebook owning Whatsapp, I'm more sure than ever - Facebook has been terrible in the UWP world, never going further than a badly ported version of their iOS codebase.

Comments welcome then. The number of services and apps which are no longer in the Store is starting to grow, directly impacting anyone trying to refresh or rebuild a Windows 10 Mobile phone. I can feel a new list coming on.....(!)

PS. Unigram (Telegram) is a more than capable replacement, though re-educating family and friends to use Telegram is a whole other kettle of fish, of course!

Filed: Home > Flow > Whatsapp to (probably) be withdrawn from the Store at the end of June