The Register's write-up of the opening of the new Microsoft flagship store in London yesterday is a little snarky, but I think there's good reason to be so. And, with the abandonment of Lumias and mobile hardware by Microsoft almost three years ago, the company gets little sympathy from me. Still, a prominent presence in Regent Street is surely better than nothing at all?

From The Register report: 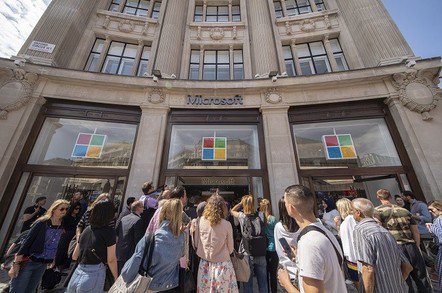 Microsoft finally opened the doors on its flagship store at London shopping mecca Oxford Circus today, leaving all but the most breathless fanboys wondering what exactly the company had spent the last few years actually doing.

The shop is the company's first physical retail store in the UK and covers an antiTARDIS-like 22,000 square feet over three floors. It feels quite a bit smaller on the inside than the exterior would suggest.

...And there is also Microsoft's take on Apple's Genius Bar: the Answer Desk.

The Answer Desk is where some of the 150 "Store Associates" (or maybe Windows, er, Workers? Wizards? Something else beginning with W?) will assist customers with setting up their purchases and dispense technical support. There is also a Gaming Lounge and a small Community Theatre (set up like a classroom while we were there).

Go read the article for much more detail, of course.

I have to say that the wholesale copying of Apple's Store system ('Answer Desk', indeed!) sticks in the gut rather. When the Surface hardware in particular has been so innovative, why be so derivative in terms of retail space?

On the whole, the ground floor is Surface, the first floor is gaming, and the second floor is for special events and training, it seems. All better than nothing, but unlikely to attract crowds in quite the way the more rounded selection of hardware in the Apple Store does on a day to day basis.

And yes, no Lumias, of course. I do wonder if anyone at Microsoft thinks wistfully back to 2015/2016 and wishes the decision to can the company's first party phone hardware had gone differently. Even 1/50th the cost of buying LinkedIn would have funded the phone business for most of a decade... Staggering to contemplate on the decisions made by the Microsoft board. Ah well.

In summary, it sounds like the Microsoft Store is worth a look if you're in London anyway, but don't trek from further afield.