Photos 'vulnerability' not worthy of a Microsoft fix

This is technically a privacy vulnerability in Windows 10 Mobile but a) it's local to your phone, b) an attacker would have to be incredibly knowledgeable, and c) all they'd get access to are your photos. Details below, but in short, don't get worried over reports on other sites about a 'W10M security vulnerability that Microsoft's not going to fix'. It's not important at all.

Firstly, from Microsoft itself:

A security feature bypass vulnerability exists in Windows 10 Mobile when Cortana allows a user to access files and folders through the locked screen. An attacker who successfully exploited this vulnerability could access the photo library of an affected phone and modify or delete photos without authenticating to the system.

To exploit the vulnerability, an attacker would require physical access and the phone would need to have Cortana assistance allowed from the lock screen.

So I think 'access files and folders' is a bit misleading. Perhaps if you kept super-secret or compromising photos on your phone then you'd be a tiny bit worried. But which of us does that without some extra form of protection?

Still, you'll now be wondering how hard it is to execute the vulnerability? It's VERY hard - I tried numerous times on my IDOL 4 Pro and I wasn't fast enough. So I'll have to take Reddit's word for it:

We reported this issue to Microsoft in December 2018, a year before the operating system's end-of-life. After nine months of evaluations and analysis, they decided not to patch the vulnerability because of the “limited users of Windows 10 Mobile, the physical access requirement to reproduce this issue, and the difficulty in steps to reproduce.”

Even though it's very hard to do in reality, there's video proof:

So there we go - it's a minor flaw and, given an OS still under active development, it would get addressed just to be on the safe side. But given that all work on the Windows 10 Mobile interface code* had already stopped by the time the issue was disclosed, and given the obscure nature, I'm not at all surprised that Microsoft chose not to do anything, risking breaking something else in what had become a fairly stable UI in the process.

* as opposed to that on the kernel and core components, which continue to get security tweaks to this day (and until the end of 2019) 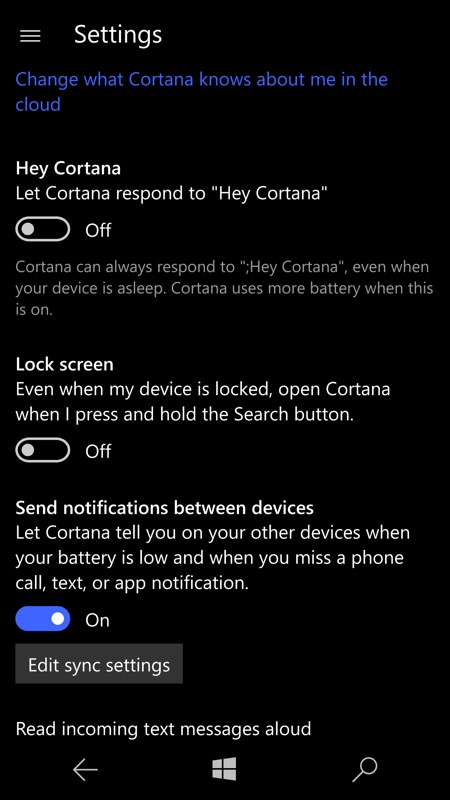 If you're still worried (you shouldn't be) then you can always disable lock screen Cortana access, as shown above...