Camera flash has been a bone of contention for years on phones, of course. From the ultra-bright, ultra-fast Xenon flash of the Nokia N82, N8, 808 and Lumia 1020 (freezes motion and lights up a room but also washes out atmosphere) to the weedy LED flash of everything since (shutter delays, plus blurry subjects when they're not perfectly still), most experts have just turned off flash in their camera UIs and rely on natural light, for better or worse. But maybe this thinking could change with proper 'wired-in' remote flash units, and I was curious to see the reports of the Anker accessory featured below. 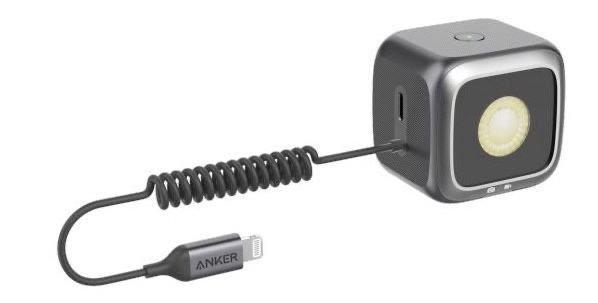 Anker today debuted a new Made for iPhone (MFi) certified LED flash accessory that's designed to connect to the iPhone 11, 11 Pro, and 11 Pro Max through the Lightning port. Though a product link is not yet available, The Verge says that the new accessory is launching next month and is priced at $49.99.

The flash accessory will be recognized by the new iPhones and can be triggered by the default Camera app and third-party camera apps. It will last for approximately 10,000 shots per charge and comes with a detachable diffuser option. Compared to the built-in ‌iPhone‌ flash, Anker says that the flash can achieve twice the range and four times the brightness.

Anker's new flash option is the first Made for ‌iPhone‌ flash accessory that's been designed, but as Apple has now opened up its Made for ‌iPhone‌ program to these kind of camera accessories, we can expect additional Lightning-based flashes to be released in the future.

Yes, yes, get over the iPhone/Lightning specificity, I've already said that I'm now prepared to recommend the iPhone 11 Pro as a way to go for Lumia camera phone fans. (Though I'll come back to other recommendations in a future article update.) What's interesting here is that this is a fully wired, fully tested, fully certified imaging accessory for phone camera enthusiasts who know what they're doing.

Twice the range and four times the brightness of the existing quad-LED flash of the iPhone 11 series sounds pretty good. The wire means that the light source can be positioned well over 30cm away from the phone camera lens, meaning that there's no 'red-eye'. And the wire also means no latency in terms of 'firing'.

On the other hand, you have to know why you're using a standalone flash unit, you have to have a creative shot in mind, and you have to either hold the flash off to one side or have a dedicated resting place, so this isn't for the casual user.

I just found it interesting, with a view to a future filled with more phone imaging!

PS. Could Xenon work here too? With modern multi-exposure low light software systems, having one of the burst be illuminated by the 10 micro-second Xenon flash might be very interesting indeed....