Google's recent announcement of Android 12L ('L' for Larger screens, or even perhaps Landscape), due to be integrated into the main code bases in 'early 2022', is especially welcome for fans of transformer devices like the Galaxy Z Fold 3 or the Microsoft Surface Duo 2. Essentially, a lot of what Microsoft had to custom-code for the Duo in Android 10 and Duo 2 in Android 11 is now about to be formalised and implemented by Google itself in Android 12L. A geeky video and some thoughts below.

You'll have read my Surface Duo 2 review and my walkthrough of getting going with the Duo 2 emulator. 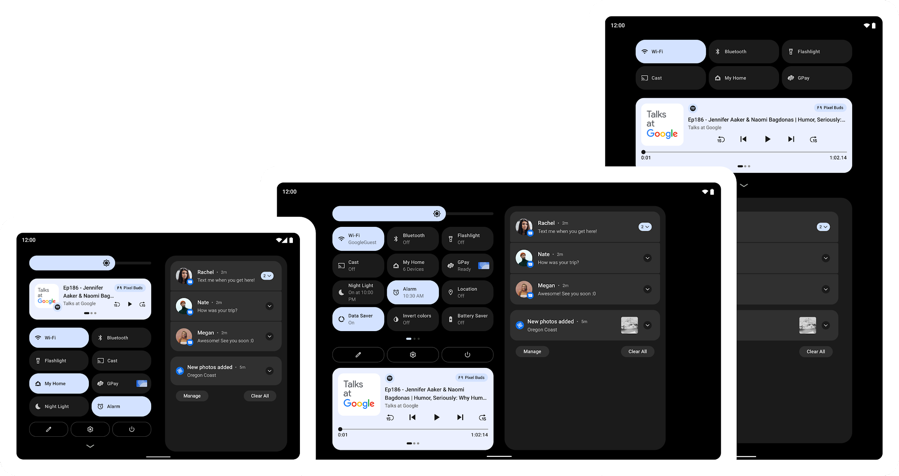 Now, from Google itself:

We announced a feature drop for Android 12 that is purpose-built for large screens, we’re calling it 12L, along with new APIs, tools, and guidance to make it easier to build for large screens. We also talked about changes we’re making to Google Play to help users discover your large-screen optimized apps more easily. Read on to see what’s new for large screens on Android!

In 12L we’ve refined the UI on large screens across notifications, quick settings, lockscreen, overview, home screen, and more. For example, on screens above 600dp, the notification shade, lockscreen, and other system surfaces use a new two-column layout to take advantage of the screen area. System apps are also optimized.

We’ve also made multitasking more powerful and intuitive - 12L includes a new taskbar on large screens that lets users instantly switch to favorite apps on the fly. The taskbar also makes split-screen mode more discoverable than ever - just drag-and-drop from the taskbar to run an app in split-screen mode. To make split-screen mode a better experience in Android 12 and later, we’re helping users by automatically enabling all apps to enter split screen mode, regardless whether the apps are resizable.

We plan to release the 12L feature drop early next year, in time for the next wave of Android 12 tablets and foldables. We’re already working with our OEM partners to bring these features to their large screen devices - watch for the developer preview of 12L coming soon to the Lenovo P12 Pro. With the features coming to devices in the few months ahead, now is a great time to optimize your apps for large screens.

For developers, we highly recommend checking out how your apps work in split screen mode with windows of various sizes. If you haven’t optimized your app yet, see how it looks in different orientations and try the new compatibility mode changes if they apply. Along with the large screen features, 12L also includes a handful of new APIs for developers, along with a new API level. We’ve been careful not to introduce any breaking changes for your apps, so we won’t require apps to target 12L to meet Google Play requirements.

To get started with 12L, download the 12L Android Emulator system images and tools from the latest preview release of Android Studio. Review the features and changes to learn about areas to test in your apps, and see preview overview for the timeline and release details. You can report issues and requests here, and as always, we appreciate your feedback!

12L is for phones, too, but since most of the new features won’t be visible on smaller screens, for now we’re keeping the focus on tablets, foldables, and ChromeOS devices. Later in the preview we plan to open up Android Beta enrollments for Pixel devices.

Good stuff, and although it's not certain whether I'll have a long term Duo or Duo 2 to test this on, I do have a Pixel around that will be eligible for at least basic 'landscape' testing.

Along with the 12L announcement, there was a playlist of YouTube videos, of which the one on adapting to screen sizes was the most interesting - you have to be a developer to get the most out of it, but if you skim through then you'll get the idea of adapting single screen applications to multi-pane layouts:

In short, folding devices like the Microsoft Surface Duo 2 should be able to upgrade to Android 12L as part of manufacturer monthly updates by summer 2022. Microsoft will be working right now on ways to implement their spanning and splitting features from Microsoft Launcher in terms of 12L's APIs. In theory. Mind you, Android 11 has yet to arrive for the original Surface Duo and is many months late, so I wouldn't hold your breath.

WindowsCentral's Dan Rubino, who has been reading through the 12L SDK documentation, is slightly more confident:

(Microsoft also has a blog that summarizes what's new in Android 12L and how it ties into its own work to help developers, which is worth a read.)

Of course, none of this means Surface Duo suddenly turns into a slam dunk. Microsoft needs to address touch sensitivity issues sooner than later, which has nothing to do with Android 12L. Other "quirks" with the camera app, updating its own apps, and improving the inking experience all need to be fixed, too. Lump in concerns over pricing and even just convincing people to want this device are other significant obstacles.

But Android 12L is a big deal, too. By the time it comes out, the Surface Duo experiment will be approaching its third year. That means the OS may finally catch up to where Microsoft is with the hardware, especially for overall OS design, features, and app compatibility. Android 12L also begins to mainstream these new folding phones and devices, giving Surface Duo a much-needed halo effect.

The $64,000 question is can Microsoft deliver Android 12L in a timely fashion? My gut feeling is the company may pass over Android 12.0 and push 12L instead (as it should), but it needs to do so quickly to avoid replicating the Android 11 fiasco with the original Surface Duo.

I agree - Microsoft will issue Android 12L mid-2022 as a mid-cycle update for the Duo 2. Not that the current device doesn't work pretty well, but it would be good to have the dual screen nature baked into Android itself, along with far more third party applications recognising this.

Filed: Home > Flow > Android 12L should be the 'one' (that works better with transformer phones)