Possibly the most unusually timed gallery ever put on AAWP, this is the Alcatel IDOL 4 Pro, brand new in Europe, a Windows 10 Mobile flagship in mid-2017, against all the odds, or at least against the perception of the tech media. Following an (initially) one carrier, USA-only release in late 2016, we now have a tweaked version for the rest of the world, here in full retail form.

There will be a full review coming shortly, of course, but in the meantime enjoy my first impressions. Can this new phone make a dent in anyone's perceptions of Windows 10 Mobile? Is it a device that's worth Windows 10 enthusiasts jumping to in an effort to gain faster operation than the Lumias and also a (possibly) longer support duration? 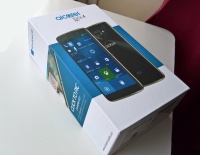 The shipping box is much smaller than for the USA version, which included a (somewhat pointless) VR visor - no great loss, in my view. And you can pick up similar quality visors now for $20/£20 on eBay if you really, really want to watch VR on YouTube etc. (in TubeCast, for example)

Inside the box is the phone, some decent-ish in-ear headphones, a standard 2A charger, USB Type C charging and data cable, and a quick start guide.

A plastic overlay on the IDOL 4 Pro's front shows the button and control layout rather well - for newbies! Every phone should come labelled like this. 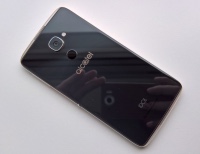 The all-glass back, and yes, I'm going to use this in a TPU case where possible - still, enjoy the slim frame and glass while you can, etc.

There's a dedicated camera button, of which more in my full review soon.... it's metal, textured and easy to find, even though the central position will take some getting used to! Oh, and it's not two-stage, so focussing is left to auto and to manual taps on the viewfinder.

It's a really handsome phone, that's for sure, here showing the logo under the glass, the fingerprint sensor (which works well) and camera hardware...

The SIM and microSD tray is on the phone's left. Just a test 8GB card here, in real world use I'll ramp this up to a 128GB, in addition to the 64GB built-in. Whoa.

The biggest USP of the IDOL 4 Pro (other than existing at all!) is the stereo front speakers - here's the top grille. They're loud and super clear, though bass only starts at about 140Hz, which is a little disappointing. Still, they knock spots off the Elite x3's speakers... 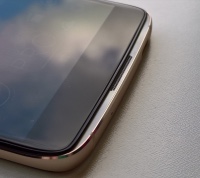 And here's the bottom speaker grille, also emphasising the way the mounted glass stops short of the device ends - it's a classy design touch that emphasises the audio... 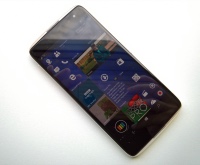 ...and here's the IDOL 4 Pro, booted up, upgraded and configured with everything from my life.

It being summer and the sun's out - the screen's not Lumia-quality outdoors - sadly.

I'll have much more on this new Windows 10 Mobile smartphone in review coverage over the next few weeks - watch this space!