Another day, another new smartphone gallery, this time getting going with the Fairphone 4, the very latest from the eco-conscious Dutch company. As with the old Lumias, you get to replace the battery - and indeed almost everything else, with just a simple screwdriver - plus the specs are mid-range comparable for 2021. See also my previous Fairphone 4 head to head, plus there will be a full review on the way in a week or so.

It's true that you have to pay a little extra to assuage your troubled eco-conscience, but with the Fairphone 4 you really can settle down for 6 or 7 years, in theory, without troubling the traditional smartphone retail channels.

As usual with our galleries, click images to expand them and scroll down a little if needed (on shallower or lower-res displays) to see any comments:

The Fairphone 4 box contents: just the phone, not even a Type C charging cable - ultra minimalist, to save on waste. I got an iFixit screwdriver too, but that might have just been for reviewers.

A standard glass and metal slab at first appearance - but looks can be deceiving!

The rear is VERY grippy, made of rubberised plastic, meaning that you absolutely don't need a case for this phone, immediately giving it kudos by not adding bulk to your life. Don't worry about the apparent triple camera - one of the circles is a Time of Flight (ToF) sensor!

Around the edge, near the bottom, you'll see a thumbnail-sized notch. This is where to pry confidently to peel the back right off...

This is where things really differ from every other modern smartphone. The back - literally - peels off, revealing the Fairphone 4's insides, all held in with standard cross-head screws!

Each removeable component is marked clearly so that anyone can attempt replacement. Just a few screws and modules pop out - more on this in my full review!

Most obviously of all - the battery comes out, with no unscrewing needed. As on many Samsung phones pre-2014, and as on many classic Nokias and Lumias, you just lift the battery out, potentially replacing it with a charged spare from your pocket. 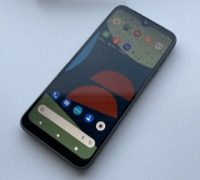 Powered on, this is the first Fairphone design with a 'full screen', minus the small notch for the selfie camera. The 'three buttons' controls can also be toggled off, to leave a full screen gesture experience in Android 11...

A Fairphone with a camera bump? What does it think it is, a flagship? Actually no, it's not, but the three circles at least fake people into thinking you've got really top end imaging(!)