It's here. Somewhat belatedly, and with the Windows 10 Mobile/Continuum platform itself running out of life support. But the NexDock 2 has finally arrived, and of course it's future-compatible with Samsung Dex on Android, plus many other similar USB Type C-based systems, so it's an accessory that's applicable right across the board. I'll be reviewing it fully over the next few weeks, in conjunction with my Lumia 950 XL and Samsung Galaxy S9+, but let's start with a hands-on and unboxing gallery.

As covered here in the 2019 teasers, the NexDock 2 is a pretty exciting accessory for any Windows 10 Continuum or Samsung DeX fan. The idea is to plug in via USB Type C and have the entire OS/UI extended to the lap dock screen (while the phone screen acts independently), with access to a full keyboard, full trackpad, and truck-loads of extra ports, all accessible to the phone's OS.

Here's our opening gallery and first impressions anyway, the full review will be along once I've got some NexDock 2 miles under my belt!

As usual with our galleries, click images to expand them and see any comments: 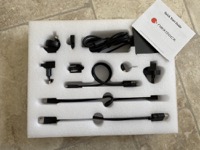 The thick foam oblong packaging includes a surprising number of accessories - but they make sense in the context of the Nex Dock 2 effectively being a USB 'hub' on steroids. So you plug the phone in, then it has access to the obvious (screen, keyboard, trackpad), but also to connected USB drives, SD cards, monitors, and so on. In the packaging, you get lots of international power adapters, plus microUSB to Type C adapter, a Type C to microUSB/A splitter (for use with a Raspberry Pi), a short Type C to Type C cable (used below), and a short HDMI cable (also for PI use, primarily). 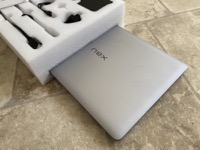 The NexDock 2 itself is protected in a slot beneath. Notably, there's no carrying case, but then if you own this then you're trying to work ultra-light anyway, so perhapsyou'll already have your own bagging arrangements sorted? 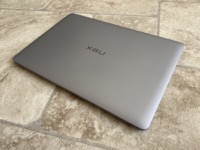 In the hand, the NexDock 2 feels premium, with aluminium outer shell (even if the insides are cheaper) - the logo is inverted so that it's the right way up to advertise the name when the lap dock is opened up and in use. 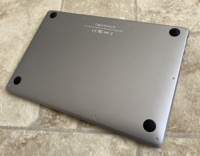 Underneath, we see more aluminium, four substantial rubber feet, plus ten high quality screws, holding the guts of the NexDock 2 together.

The left hand side, showing the tapering design and four ports (of which more in a moment), plus a charging LED...

From left to right, HDMI-in (used with display-less devices like the Pi), USB Type C charging (with PowerDelivery requirement - a 60W charger is included in the box, and charging LED), Type C for supplying power to 'dumb' devices (though I'll try it in due course with other things), and then the main Type C port for hooking up a Windows or Android smartphone (with full data and power).

The right hand side, again showing the thinning profile and extra ports...

These are a microSD bay, a 3.5mm audio/headphone port, plus a standard USB-A port (typically, one would add a wired mouse here, for anyone not liking trackpads). 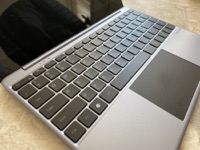 The keyboard is... pretty good. Key travel is a good 2-3mm and it's even backlit if needed (with a function key to turn this on). The special key near the bottom left auto-activates the Start/home function on any connected device. 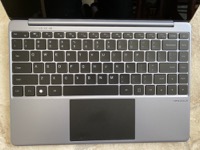 Looking at the key layout in more detail. Along the top there are also screen brightness adjusters and media control, plus a dedicated key to check battery status, and the main power on/off of the NexDock 2, top right. There's also a physical 'Esc' key, something which recent Macbooks have lacked (annoyingly). 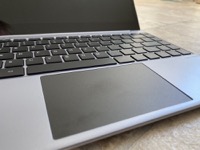 The trackpad is huge and - again - pretty decent for the price. It's top hinged but with a brace at bottom centre, meaning that there's no danger of left clicks becoming right, and vice-versa. In practice the mechanical clickable area is around a square inch each, plus there's also 'tapability' built into the whole trackpad, if you prefer more subtle action. 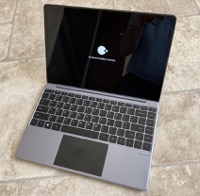 Press and hold the power button and the Nex Dock 2 is ready for action. There's no obvious way into any kind of internal settings menu, but there's clearly firmware on the chips, so hopefully there's a way to update this in due course. Again, I'll investigate! 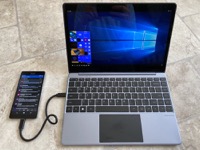 Plugging in a Windows 10 Mobile smartphone yields a familiar Continuum desktop, with UWP applications taking this over, independent of what you're doing on the phone screen, i.e. as usual, it's an extended display that just happens to have its own keyboard and trackpad, plus hub functions. 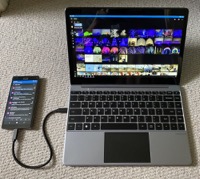 Here, for example, I'm in the OneDrive UWP application, browsing my online photo backups, while the phone keeps an eye on email. 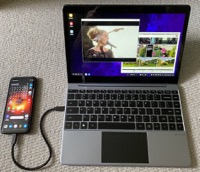 But it's not just Windows - the NexDock 2 keeps to USB Type C specifications and so any compatible Android smartphone - e.g. the Galaxy S9+ here - or indeed a Raspberry Pi or similar - can be hooked up successfully.

More thoughts in a week's time after much more testing. The internal battery is 51Wh, which is quite large, by the way, so although you essentially have to charge this from the supplied charger (or a similar Macbook one) because of the Power Delivery requirement, in typical use you'd get around 10 hours of use per charge, or a bit less if you need your phone topped up a lot too. Again - testing needed by yours truly.