Available to buy today* is the Wileyfox Pro, a new Windows 10 Mobile-native smartphone aimed unashamedly at security-and-budget-conscious businesses. Everything's aimed in this direction, from an OS that doesn't have time wasters like Snapchat or trendy games, but is rock solid in terms of security schedules, to 'old fashioned' hardware features like a replaceable battery, microSIM support and a headphone jack. Ahead of my exclusive full review, here's an initial image gallery.

* Well, almost. It's listed on Amazon UK here at £189, but 'out of stock'. Which means that the initial batch sold out yesterday and that more are expected in, though not 'for Christmas'. Anyone know how many 'Pro's Wileyfox might have had made?

There will be a full review coming shortly, of course, but in the meantime enjoy my first impressions. Despite what you may think about the specifications, this is aimed at a specific gap in the smartphone market. I'll explain in due course. 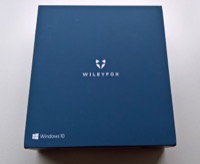 It's a box. A business box. No consumer graphics, slogans or distractions. Understated to the max.

A slight camera island, though don't expect much from the camera here(!), plus microUSB port up the top - unusually - and a welcome headphone jack.

microUSB is OK at this price point and market positioning - businesses are awash with microUSB cabling, too. A 3.5mm headphone jack is essential in a phone and you'll already probably have read my rants against some companies ditching it (unwisely)...

The Wileyfox logo on a Windows phone - at last! The removeable (and replaceable) rear cover is understated business dark grey and is rubberised for good grip.

The mono speaker is decently loud, though not top notch fidelity. The little nubs either side help keep the speaker from muting when you put the phone on a surface.

The back cover sits deliberately proud of the curved body, to give extra grip in the hand. Notice the cutout here for easier removal with a fingernail.

The charger is lowly by flagship standards, just 1A output, but with slide on options to convert between USA, Euro and UK standards.

With the USB cable inserted and ready for action. 1A output is disappointing, but then the phone's chipset here doesn't support fast charging and this will be fine for the typical use case.

Capacitive controls are yet another break from 2017 conventions, at least for Windows 10 Mobile, but they're effective and mean maximum screen content all the time. No complaints... so far! 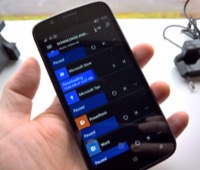 First order of the day - update the Store app! Then it's the usual 30 or so core apps updating, then check for OS updates. Busy, busy, busy! 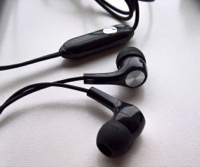 The supplied in-ear buds are surprisingly good, with decent EQ, though the DAC in the phone doesn't push out much volume. But again, this is a niche and budget handset, so about what I'd expect.

I'll have much more on this new Windows 10 Mobile smartphone in review coverage over the next few weeks - watch this space!