Thin may be in. But it's not necessarily better

Unless you've (literally) had your head under a rock for the last 3 years, you'll have noticed that 'thin' is 'in' in the phone world. The thinner the better and the lighter the better - the aim seems to be to create a phone that's nearly all screen and never mind its other attributes. Playing devil's advocate, I present five reasons why thinner is not necessarily better.

Looking at Nokia's recent designs, there's a definite trend towards thinness - I blame the E71, which started it! Since then, we've had the E72 and E7 in particular, boasting outrageously slim profiles for their functionality. Outside the Symbian world, things get even more extreme. I'm reviewing the Samsung Galaxy S II at the moment, possibly the fastest and most powerful phone on the planet. Yet despite its massive 137mm diagonal front profile, it's only 8.5mm thick. The Windows Phone-powered HTC HD7 has a diagonal profile of 133mm and is just 11mm thick. That's insane.

And here's why. As I say, five reasons why thinner is possibly worse, not better: 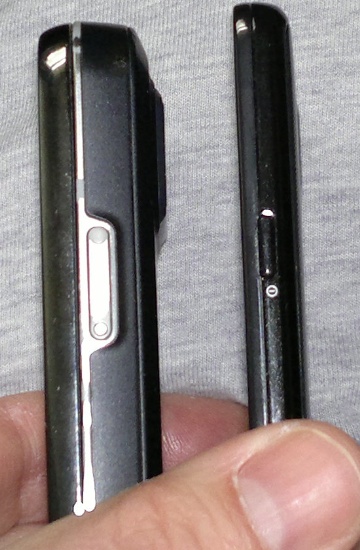 I don't think I'm clumsier than the next man, but I've definitely dropped more phones in the last few years than I did from 2004 to 2008. It's not just thinness that causes a phone to be more droppable, of course - there's the issue of materials and finish. For example, my N8 was handed round at a recent pub meet and (I kid you not) three people dropped it by accident in just the one evening (it's fine, by the way, it's built like a tank, as you know). The aluminium unibody, curves and tapers all combine to make it so, so easy to drop.

And this gets worse as the device gets thinner. The E7's even more droppable, relative to its size. And the Galaxy S II, archetypal in today's world of the current thinking in smartphones, just falls out of the hand, since 3 of those 8mm of thickness are devoted to a gently tapering, curved rear profile. Leaving only about 5mm to grip, from side to side. And woe betide you if your grip slackens, because the whole thing will simply slither down from between your fingers.

(Incidentally, the aforementioned HD7 fares better in this regard, not because it's thicker, but because HTC had the sense to rubberise the whole of the curved back surface, making the device stick in the hand better. Note to other manufacturers - more rubber, please!)

You can, of course, add a silicone case - but then you've made the device substantially thicker - which ruins the point in the manufacturer aiming for 'thin' in the first place!

Related to point 1 above, when a thin phone does get dropped there's less material to absorb impact, less opportunity for deformation. So more force gets transmitted to the giant screen - which is then more likely to shatter and is, of course, prohibitively expensive to replace. It's a good thing that many current models have 'Gorilla Glass', but even these aren't totally immune to impact shocks.

Cameras work by focussing light from a scene onto a sensor - if the distance between lens and sensor is small (in the SGS II's and HD7's cases, only about 5mm) then the sensor itself has to be small (light travels in straight lines, go draw yourself a diagram!), which ultimately limits the performance of the unit. In practice, the Galaxy S II's photos are OK, proving that sensor technology has been improving almost as fast as camera size has been shrinking, but my point still applies - if you keep on shrinking thickness and thus camera size, you'll impact camera performance. (The HD7's photos really are rubbish, but that's also because HTC used a very small and cheap sensor on it...)

(As an aside, think back to the Nokia N93 with its huge barrel camera lens - can you imagine what sort of performance it could produce with today's sensor technology?)

This goes without saying, but the thinner you make a smartphone, the less room there is for battery cells. The Galaxy S II, HD7 and iPhone 4 both manage to get through a day of use without too many dramas, thanks to the current acceptance that it's normal to have to fully charge a phone every single night. The Nokia N8 and E7 manage the same feat on a smaller 1200mAh BL-4D, thanks to software optimisations in Symbian^3, but I still contend that a really useful smartphone should not only last the day but also get through most of the next one too, catering for real world situations where, for one reason or another, you're unable to give your device its nightly charge.

I've complained about the E7's design compromises already on AAS, but it very definitely falls foul of this point and the previous one. Oh, for an E7 that was 1mm thicker - and had a better, auto-focus camera and a 1500mAh swappable battery. Thin is very definitely one compromise too many, sometimes...

Or, to put it another way.... less believable, for the money. Top end palmtops, back in the 1990s, were about £500. Top end smartphones, today, are also around £500, SIM-free. Discounting the effects of inflation, we're still talking about something that's expensive - at least, for most potential buyers. And the thinner a device is, the higher tech the innards have to be, to achieve miniaturisation. And that translates into higher prices for the end user - just look at the Nokia E71 versus E63 for a good example of the thinner device having a higher specification and higher price.

Then there's perceived value. I handed the E7 to my wife and she absolutely, 100% believed that this heavy slab of metal was a £500 cutting edge smartphone - in other words, had she been in the market for such a beast, she could see where her money was going. I handed her the 116g, 8mm thick Galaxy S II - and she liked it a lot. Not too heavy, beautifully thin, would slide into any purse or bag - but she also couldn't believe the £530 price tag.

Once the geeks and early adopters have had their way, I have a feeling that some serious price drops are going to be needed for some of today's ultra-thin devices in order for normal High Street buyers to be happy about getting value for money.

Do I really want smartphones to be thicker, heavier and bloated? Of course not. Yes, I'm playing devil's advocate in all this, but do think that some of my points are worth manufacturers considering. Do my objections to 'thin' make sense to you?

Filed: Home > Features > Thin may be in. But it's not necessarily better