A NFC (Near Field Communications) primer

NFC, widely touted to be one of the 'next big things' is here already in the Nokia C7, Google Nexus S and Blackberry Bold 9900, plus all the new Symbian Belle handsets have it built-in and other manufacturers and platforms are sure to follow. But what actually is Near Field Communications and how does it work? What can you do with it right now and what will it enable in the future? Here's a bookmark-able primer that should answer all your questions.

What is NFC and how does it work?

As the name Near Field Communications implies, it's a wireless technology that only works over a very 'near'/short distance, usually a centimetre or two. And, typically, this involves touching ('tapping') your device to the tag or chip (since you have to allow for the bulk of the tag container and phone body). NFC operates at 13.56 MHz and at data rates ranging up to 424 kbps - technical readers will spot that this isn't very fast, but then the amount of information transferred by NFC is typically very small - less than a kilobyte - any larger transfers are handed off to another wireless technology, e.g. Bluetooth (see the use examples below).

Just as with other proximity card technologies, NFC works using magnetic induction between two loop antennas located within each other's 'near field', effectively forming an 'air-core transformer'. In other words, power can be transferred ('induced') in an otherwise passive, unpowered chip (usually referred to as the 'target'), after which basic RF data transfer can occur. So NFC targets can be simple tags, stickers or cards that do not require batteries and can be extremely small and thin.

Such targets are effectively read-only, with information programmed in at the time of manufacture, or at least at the time they ship. Typical information in a NFC target would be an Internet URL (e.g. a Facebook page or web site), but almost any data is possible, depending on how widely compatible with real world devices the target is intended to be. 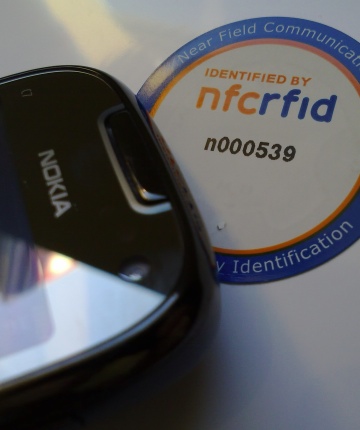 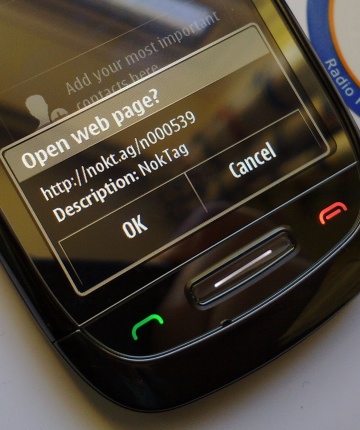 In addition, the target can of course be powered too, so-called 'peer to peer' communication. For example, two smartphones, or a smartphone and a headset or other accessory. In this 'active' mode, both the initiator and the target device communicate by alternately generating their own 'near' radio frequency modulations. I.e. they take turns sending information - each device deactivates its RF field while it is waiting for data so that it can pick up modulations from its NFC partner.

Interestingly, because of the 'near' bit, i.e. the two devices have to be touching, there's no need for 'pairing' as we're used to in the Bluetooth world. In other words, there's no need to confirm that you've got the right devices, tag or accessory, since it's pretty obvious. NFC is also more suitable for letting devices communicate in a crowded environment like a tech event - a situation where Bluetooth can fall down flat because of the sheer number of pairable devices within 'range'.

What can you do with NFC right now and what will it enable in the future?

[Implicit in all this is that you know where the NFC aerial is in your smartphone - usually at the top edge or embedded in the battery cover on the back - you have to get this right because of the tiny distances needed.]

The most basic NFC implementation, with a passive tag, usually embedded in a poster/sticker, in a business card or badge. The tag is indicated with a logo or arrow or other instruction and you tap the appropriate bit of your NFC-equipped phone to the tag. Usually an Internet address of some kind is indicated - showing product information, voucher codes for the establishment you're in, information on exhibits in museums and galleries, social updates for a person or company, or kicking off a 'check-in' on Facebook or similar. The use cases do extend to sending automated SMS (e.g. for getting info, managing ticketing, accessing entertainment services, etc.), to transferring a contact's vCard, or passing on application specific code (e.g. unlocking hidden levels in a game or getting a voucher).

Note that a tag can contain more than one piece of information (within the byte limits already mentioned), there are protocols in place for delimiting which bit is which. See the RTD (Record Type Definition) and NDEF (NFC Forum Data Exchange Format) specifications.

The simplest of the active use cases for NFC, here you use the technology to help your smartphone pair with a Bluetooth accessory (e.g. speakers or headphones). Again, the usual PIN-based pairing for Bluetooth is averted because the proximity involved in NFC is the tech's assurance that the right phone is being paired with the right gadget. You simply march up to the accessory, tap it against your phone and bingo, the two are paired (as in the speaker demo video below). For more on this, see the NFC Forum Connection Handover Specification.

Along the same lines, but with Wi-fi, it will soon be possible to achieve instant configuration for a wireless network by simply tapping the NFC-enabled router with your phone.

There are two scenarios here, both involving two smartphones. The first and most generic uses LLCP (Logical Link Control Protocol) to use NFC to initiate a generic object file transfer (e.g. a photo), with the main data transfer taking place using Bluetooth or Wi-fi (remember that NFC isn't fast enough for data bearing). Typically you'd tap your phone to someone else's and the recipient would get a prompt to accept whatever was on your screen at the time (again, perhaps a photo or small video).

The second scenario uses SNEP (Simple NDEF Exchange Protocol) at an application level, allowing you and a friend to tap phones to share specific, detailed information. Again it depends on the application and which screen is in the foreground, but typically you might transfer contact information, your Twitter handle, a Calendar appointment or an in-game object of some kind. For example, the Angry Birds game has a NFC-aware version in which you can tap others' phones to pass on (or gain) level unlock objects.

This is the sexiest and most high profile use case for NFC but it's also the hardest to implement because you need an end-to-end commerce system. It's easy to arrange to tap your phone against a payment terminal (e.g. at a shop or train station), but what will the (on its own, dumb) NFC reader do with your credit card information? What will it do with your registered identity? We're just starting to see end-to-end NFC payment arrive in the real world, thanks to companies like Barclaycard, Orange, and Google (with their Wallet system and signed up partners). In each case the starting point is a dedicated application on the phone that passes on the appropriate payment information via NFC to a service which knows what to expect.

It's very early days though. In the future, most card issuers will be on board, most online payment systems will be NFC aware and most shops will accept 'contactless' payment (a misnomer, since you're almost always going to 'tap' their sign or reader!). It's not a question of if NFC will take off for wireless payment but of when.

At the phone level, your payment details need to be held securely - it's not clear yet whether a software implementation will be enough (as at present) or whether a physical chip or dongle will be needed. Your details are passed over using LLCP or yet another NFC protocol, SWP (Single Wire Protocol).

Note also that there are usually limits on how much can be paid in this manner, to prevent theft-and-then-use, etc. The limit is currently £15 in the UK but will probably rise in time (e.g. 'pay-by-card' fuel pumps are limited to £50 in the UK at the moment, I'd expect something similar for NFC). Amounts over the limit would presumably have to be authorised in the conventional manner with a PIN.

Summarising NFC use cases in video

Not all of the above are demonstrated in this video, but it's a useful 53 second overview, courtesy of Nokia:

Will NFC take off?

[NB. In practice, a 'tap' isn't always a simple tap, at least not for early NFC devices such as the C7 and Blackberry 9900. It often takes a good second, held in place, for the NFC detection and data transfer to take place. However, this is already much faster in newer smartphones (such as the Symbian Belle devices) and for 2012 phones, a tap will be just a 'tap' after all.]

The number of NFC-enabled phones is still low as of October 2011 (only a handful) and the number of NFC-aware services, gadgets and tags is just as pitiful, but there's a very clear growth curve and most major phone manufacturers have committed to NFC in their phones in 2012. Nokia, for one, is fully behind Near Field Communication, as we've seen in all the Symbian Belle smartphones, and as we'll doubtless see in many Series 40 and Windows Phone smartphones announced by the manufacturer in the future.

Steve Litchfield, All About Symbian and All About Windows Phone, 20 October 2011