I blame Apple. Although it didn't invent the 'app store' (that was Nokia, back in 2006), Apple was the company that really popularised the idea, to the point where something doesn't really 'exist' now unless there's 'an app for that'. Which is totally unfair, since many Internet-centric functions work just as well using what the web site throws at your smartphone. Here's a case in point: watching YouTube on your Windows Phone smartphone.

When Windows Phone first shipped, many devices had Microsoft's original YouTube client onboard. This served up the old 'mobile' versions of videos (I'm guessing 320 x 240 pixel frames, a.k.a. 240p), as it had been doing for old QVGA phones for years, which looked pretty horrible on the WVGA screens of Windows Phone devices. Since then we've had HTC rolling its own client for cherry picking a higher resolution stream (e.g. 480p) from YouTube's servers and several third party tools such as SuperTube which did much the same, even adding in 'download' options (not within YouTube's TOC, but hey, don't we all do it sometimes?).

All of which is great, but it turns out we didn't need an application at all. All we needed were a few tweaks on the YouTube back end. Oh yes, and Mango, which came with Internet Explorer 9 and proper HTML5 support (who needs Flash?). Essentially, YouTube is a 'web application' on Windows Phone, an application that's implemented as a web page. And it works rather well. Just ignore the URL bar  at the bottom of the screen - that's the only real indication that you're in the web browser rather than a native application.

Although there's a 'YouTube' application listed as from Microsoft in the Windows Phone marketplace, this is merely a shortcut to a normal web address. And that couldn't be simpler. Either enter "youtube.com" or use a 'favourite' for this in Internet Explorer and you're there. The server knows what you're using and does all the magic necessary: 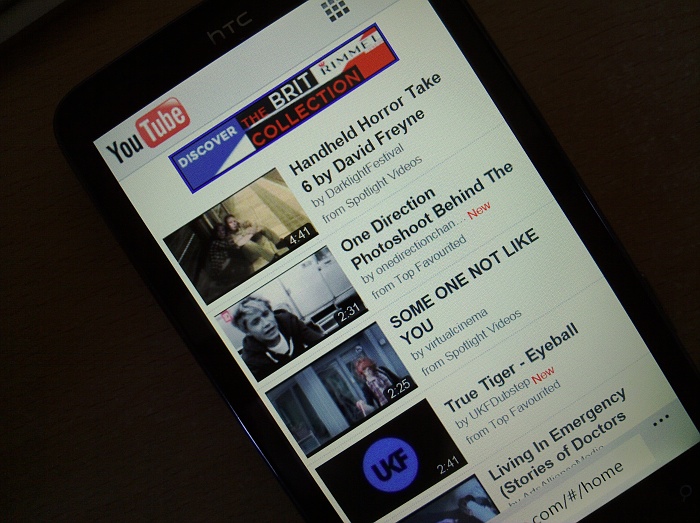 At the top right of each page presented are two icons - the search one is obvious, the grid icon is your YouTube control panel, tap it to bring up the traditional YouTube navigation elements: favourites, subscriptions, inbox, and so on: 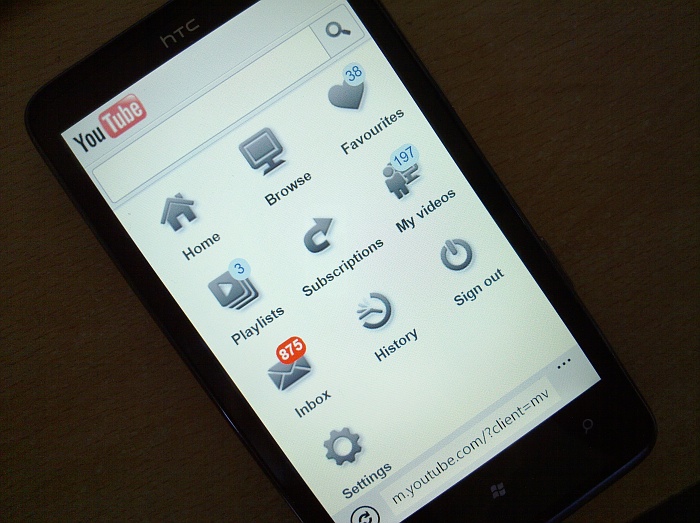 Browse through to one of the videos offered, preferably one that you know is in high quality on YouTube already (including 'HD' in your search string often helps here) and tap on the play icon. You'll be served up a very high quality stream that works extremely well on Windows Phone, bandwidth-permitting. 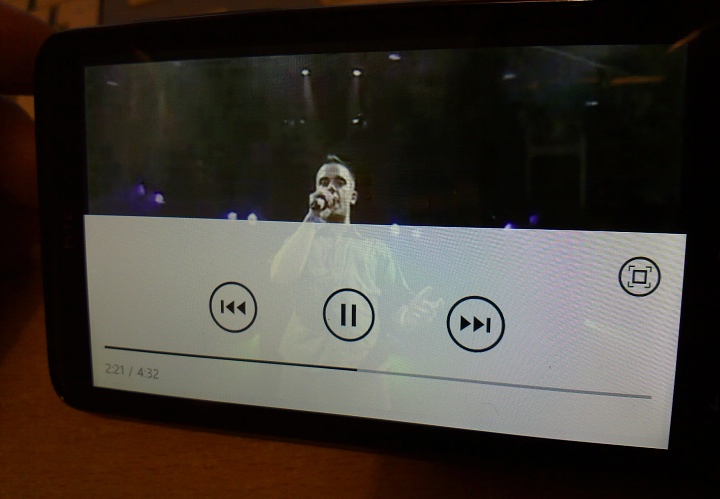 Interestingly, there's no timeline 'scrubbing', i.e. you can't drag the playback indicator along  the timeline to fast forward - nor can you long press one of the on-screen control icons. Instead, tap the forward or back icons repeatedly, to nudge playback along (or back) as needed. Widescreen videos play with narrow black bars top and bottom, but there's a 'full-screen' icon that's worth considering. This doesn't resample the video on the fly to full-screen, but rather it crops the video image so that it fits vertically, thereby losing some picture off to the left and right. Your call as to which is best for you!

Below each video in its details page are two big buttons, 'Related videos' and 'Comments'. The latter is particularly good, since many YouTube clients haven't allowed the reading of video comments - here you can browse comments to your heart's content, though you can't actually reply to a specific comment - you just create a new one of your own.

There's plenty more you can do though, adding videos to your Favourites, sharing videos via Twitter, Facebook, Google Buzz (does anyone still use that?) and by email. You can edit your Favourites too, perhaps having a prune of those embarrassing favourite music vids that you added when you were under the influence at a party last year....

Are there any real issues with the YouTube experience via Internet Explorer, as opposed to within a dedicated client? Very few - performance is slightly worse for having to reload web pages as you navigate the 'interface'. And the display gets auto-switched to landscape for video viewing but often doesn't then revert to portrait and you then have to manually reposition the phone to force the mode again.

Not huge problems though, and using the official mobile site/app has one huge, overwhelming advantage - because all the functionality is on Google's YouTube web servers rather than in a dedicated application running on your phone, the functions on offer can be upgraded and improved at any stage without you lifting a finger. With a dedicated client, you're usually at the mercy of the app developer pushing out an update to improve things or add a function.

I know, I know, 'web apps' are so very 2000 (anyone remember web apps on the Palm V?) or perhaps so very 2007 (that's how apps were presented in the iPhone's first year), but don't dismiss them out of hand. With HTML5, a whole heap of web sites are rapidly finding ways to serve up the functionality you need with no external help from an app other than your trusty web browser.