Camera phone? Why not a standalone?

There's a very famous adage that addresses the question posed in the title ("Why not a standalone camera?") very adeptly and quickly: "Because it's the only camera that's with you". However, true though this is, the question and answer have provoked Tim Salmon and I to indulge in some friendly Christmas debate - comments welcome if you come down on one side of the argument or the other! The context of the question is (usually) this: geek A (usually me) is chatting about his smartphone with decent camera and geek B (usually Tim) scorns the said piece of hardware, asking the (reasonable) question:

Tim: "Who cares about the camera in that phone, it still won't be good enough, so why not ignore the camera specs, choose a smartphone based on other functions and simply take photos on a standalone camera instead? Do you even own one?"

Me: It's a little known fact, but I do own a standalone camera, it's made by Fujifilm, it's 12 megapixels, has optical zoom and a fairly large sensor. Before this, I owned several 35mm standalones - in fact, I've been taking photos for all my adult life. And, even in the period 2006-2011 (which is the camera phone era, starting, in my case, with the Nokia 6630 and then the N70), I've taken a few photos with the standalone, usually of formal occasions - weddings, a zoo trip here and there, the usual things. And some of the photos came out quite adequately.

But, and here's the statistic that blows my mind, of (say) my favourite 100 photos that I've taken over the last five years (of family, of friends, of special moments, parties, and so on), I'd say that 99 of the 100 were taken on a phone.

Me: No, not my best photos, viewed from a technical standpoint, in terms of lighting, noise, focus and quality. My favourites. It's just that nearly all my favourite captured moments (especially of special nature 'moments', of children, of pets and of informal social occasions) were taken on a phone. Because, yes, as the adage says, "Because it's the only camera I had with me". Even with the fairly compact size of standalone cameras these days (rarely very much bigger than a smartphone), I simply found that the standalone was always back at home or in my coat pocket hanging up in some cloakroom or in the car's glove compartment or out of battery. Always some good excuse.

Me: I'll accept that my job, including road testing smartphone cameras, means that I'm slightly unusual in this respect, being more likely to have a decent phone on my person and less likely to be motivated to keep remembering to bring along the standalone camera, but I doubt I'm totally alone.

I only have to look at my family's phones, with (technically) relatively poor camera quality, to see plenty of charming ad-hoc snaps from their lives, each of which means much more to them than a nicely composed sunset from my tripod-mounted standalone camera....

The reality is that the phone will go places the camera won't. It will always be with me, whatever time of day or night. It will always be ready to go and not cased, stored or protected. When a special moment happens ("Daddy, look at meeeeee!" was a typical precursor, four or five years ago!) it takes all of five seconds to whip out my phone, activate its camera and snap. Phew, just made it before the moment was lost. Five seconds isn't long. Unless you happened to be in the habit of carrying around a standalone camera in your jeans pocket all the time, the chances are that you'd take a lot longer than five seconds just finding the device. Moment. Gone. 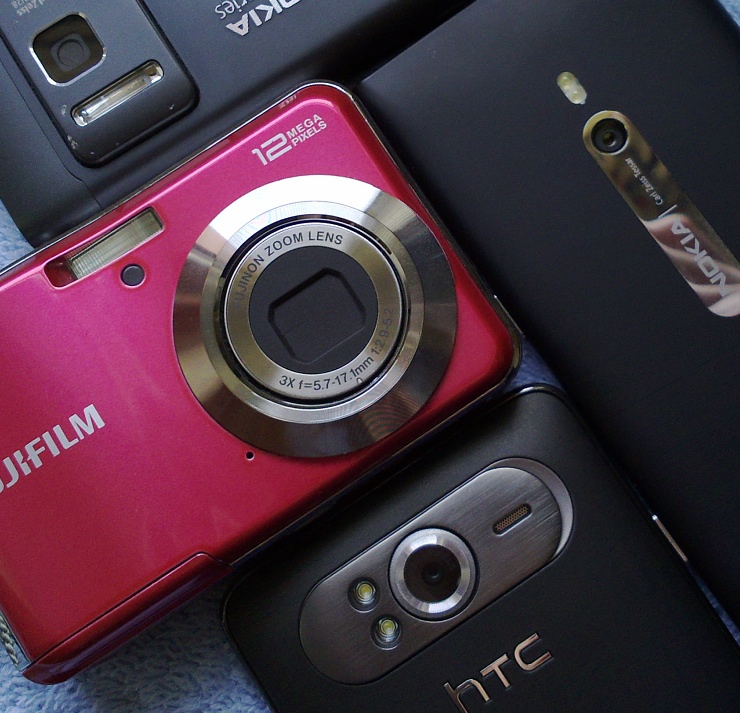 Tim: Fair points. But, hang on, it all completely falls down at time of year, with skies dark and so much happening indoors in poorish light. Because a large proportion of your readers (like me) will have smartphones with LED flash, meaning that unless their subjects are perfectly, utterly still, the snaps will be blurred and not satisfactory, however well intentioned the shot. Yes, the phone was the device they had with them, but it wasn't up to the job at this time of year. My standalone camera, with proper flash, will produce results that are utterly superior - it sits in my pocket, ready. So, again, why bother what camera the phone has?

Me: You're right, this time of year, with the nights now fully drawn in [in the Northern Hemisphere, at least! - Rafe], shows most camera phones up horribly. But not all. Tim, you may remember a piece I did exactly a year ago, "One day you'll look back... and be glad you had an N8!" - the gist of which was that if you have a Xenon-flash equipped smartphone like the Nokia N8 or N82, Sony Ericsson Satio or Motorola XT720*, then you'll look back one day at phone-shot photos from this year's Christmas festivities, present unwrappings and general quality time, and still be glad you took the photos on the device you did. No need for a standalone for these people - my answer still applies!

* Note that the Windows Phone-running HTC 7 Mozart is missing from this list, since its Xenon flash is so poorly implemented that the camera behaves like it has LED flash....

Tim: So what you're effectively saying is that your always-with-you phone is the best camera only if it has a Xenon flash?

Tim: Moreover, realistically, the N82 is ancient, the Satio was fairly appalling in its UI and is also obselete, the XT720 was rather orphaned by Motorola and hard to find these days, so... Your always-with-you phone is therefore the best camera only if it's a Nokia N8?

I do think people are fed up with me going on about the N8 though... shall we be gracious and open this up for debate by others?

Tim and Steve: Happy Christmas all - however many gadgets you keep in your pockets!

So, here's a straw poll. Over the next two weeks of festivities, what will you be taking photos on? Will you risk just a phone or will you take a standalone camera along too? Did you take just your phone to a Christmas party and how did the snaps turn out?

PS. You can catch Tim (with me and guests) on the Phones Show Chat every week.

Filed: Home > Features > Camera phone? Why not a standalone?