Out and about with Internet Sharing

Internet sharing, or tethering, is the way in which you can use your smartphone and its mobile data connection to act as an access point to the Internet for other devices you have with you. Whether you're using a laptop, tablet, or even another smartphone, your phone acts as a WiFi hotspot which relays data between your devices and the rest of the world, via your phone's mobile data connection. It's been a feature of Windows Phone 7 for some time, but Nokia have only recently enabled it for Lumia devices. I took the Lumia 800 on the road and put its Internet Sharing to the test.

You'll find the Internet Sharing option in your settings menu; once there, flipping a simple on-screen switch will set things going. Sadly there's no live tile option for Internet Sharing. I can imagine a tile to toggle sharing on and off which also displays the number of connected devices would be quite handy. 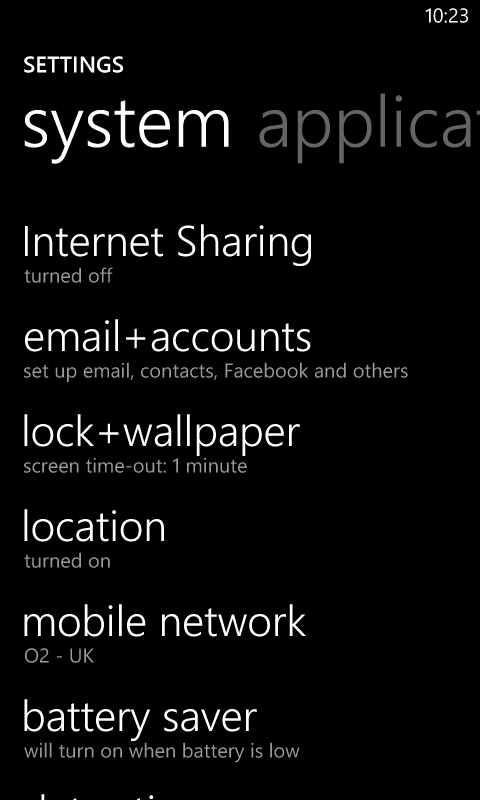 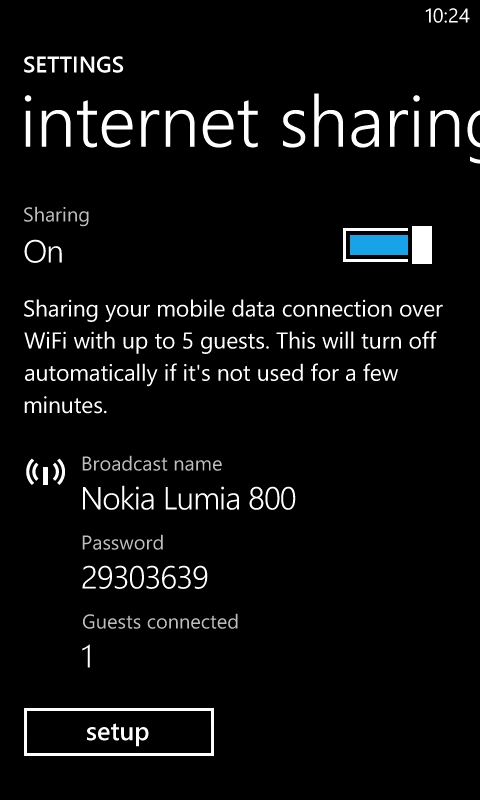 Once turned on, tapping the 'setup' button allows you to set your SSID (the WiFi access point name that you'll select on other devices), whether to enable security, and a password. By default, the password is automatically generated as a string of numbers. Unless you're very paranoid this should suffice.

Once everything is running, the Internet Sharing screen displays your SSID and password – which allows for easy reference when configuring other devices – followed by the number of connected devices (up to a limit of five).

I had a chance to put this to a real world test, as I was (unprecedentedly!) going away for the weekend, and I'd be travelling by rail. In addition to my Lumia 800, I took along my new Android Nexus 7 tablet so I could get some work done on my journey. Since the Lumia 800 recently gained Internet Sharing and the Nexus 7 lacks mobile data connectivity, it was a perfect match. 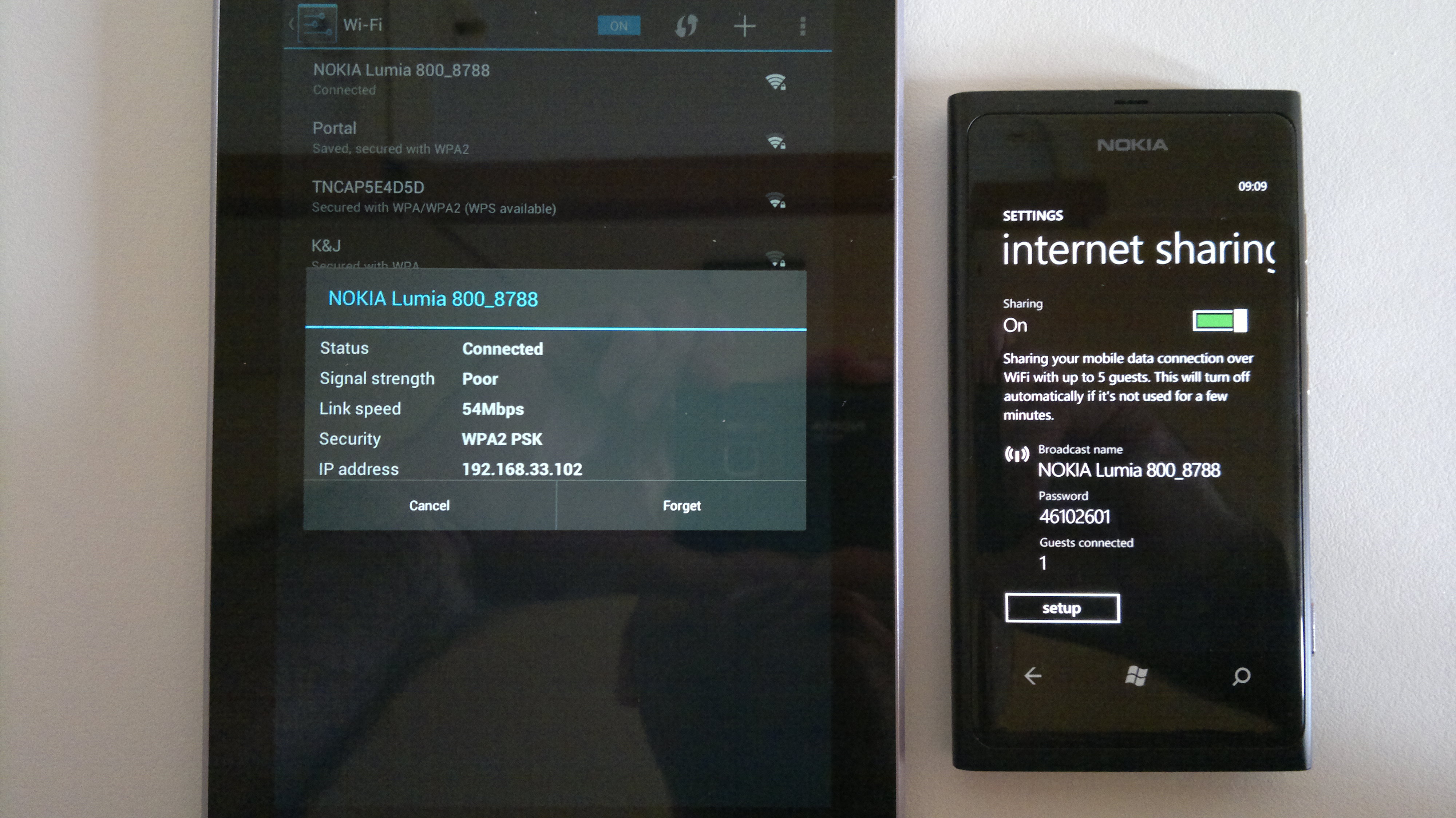 I also took the risky move of leaving home without a mains charger. Instead, I brought along a Turbocharger 7000, which had been kindly supplied to me by Proporta, to keep both devices powered. Read our review of this device here.

Getting connected was extremely simple. I had already configured the Nexus 7 with the Lumia's access point details. All I had to do was enable sharing on the phone and as soon as the tablet booted-up, it recognised the access point and connected.

The initial connection and work session was done indoors at the train station, until it was departure time. At this point, things didn't feel too different from using my home WiFi – thanks to having a full HSPDA signal from my service provider, GiffGaff. The only discernable difference was a slight increase in latency between requesting information and it appearing on screen. 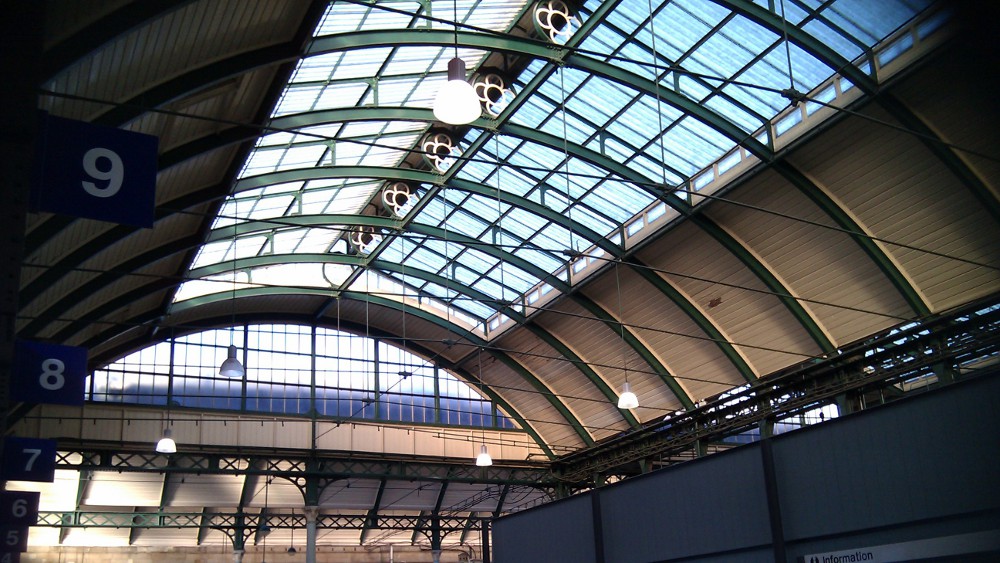 Not the best environment for getting a mobile data signal!

I had opted to work with the Google Docs application on the tablet, which requires a constant data connection. As I got further into my article I found myself being stuck in read only mode, because the Lumia was intermittently losing its mobile connection. Given that I was inside a large Victorian building constructed with cast-iron, this was forgivable.

As the boarding time approached, I switched to editing in the web mode of Google Docs, which would allow me to continue writing without a signal, but it still wouldn't save. Therefore, I copied and pasted the whole text into an email to myself as a backup. Clearly, email is more tolerant of intermittent connectivity than word processing in a browser! 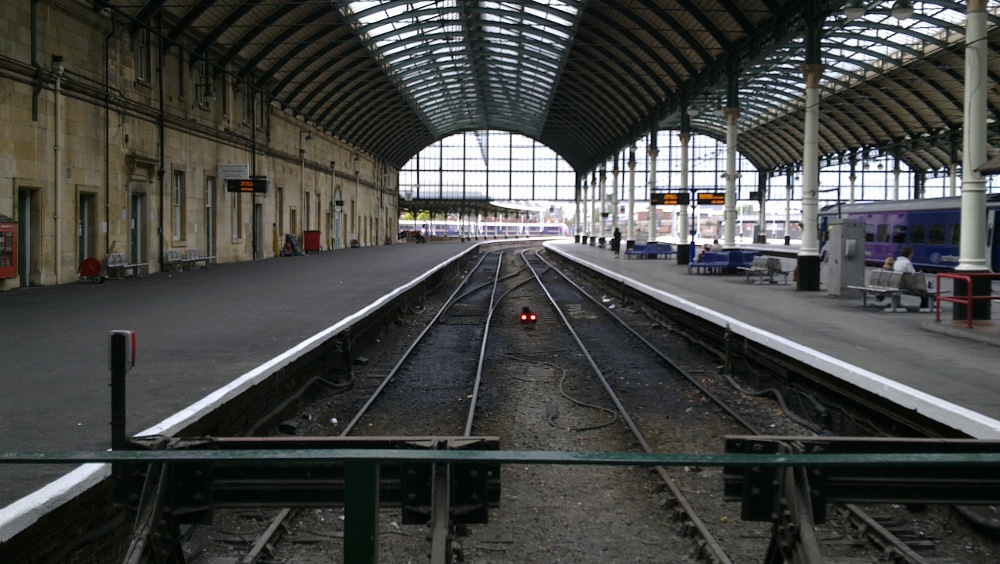 Heading off to the platform to use 3G at 60MPH

Once on the train, work continued. Signal strength was good while in the urban areas, but was still intermittent as I was repeatedly passing from cell tower to cell tower. This intermittent connection suits applications that only need to periodically communicate with the internet. Correspondingly, applications like Google Docs and Skype won't work in this scenario. Indeed, I lost some work on the train which I had to retype (writer's biggest fear!) Eventually, I gave up and wrote my article in the Gmail application and sent it to the AAWP headquarters. By this time I was in the countryside and the connection speed was often dropping to GPRS, as one might expect. This was enough to send a simple email though.

Besides the quality of connection, battery life is a big concern with Internet Sharing too. Since Windows Phone 7 'tethers' devices via WiFi, it's especially power draining, since two radio systems are constantly working at the same time. With approximately half an hour of Internet Sharing (prior to departure) in challenging conditions, the Lumia 800's battery had dropped from 93% to 82% – note that included performing its regular background tasks too.

That power consumption was much better than I expected, but it's still a significant drain and since we're talking about your mobile phone, you shouldn't willingly run it dry. This is where the Turbocharger 7000 came in handy. During the train journey, I used it to keep the Lumia (and tablet) topped up while roaming between cell towers.

Overall, I was really pleased with how quick and simple it was to set up Internet Sharing on Windows Phone 7. I admit I was sceptical of its practicality since it used WiFi instead of USB. In the latter case, sharing Internet via a USB cable would have also charged the smartphone. However, it's the only way to go in the case of getting a WiFi only tablet online.

If you're going to be sharing a mobile data connection on a regular basis, it's still probably best to buy a separate device (e.g. a MiFi) with a dedicated data plan. However, for impromptu and occasional use, then using your smartphone's data plan is the ideal solution as you're unlikely to be using so much data that your mobile provider would have any practical grounds for complaint.

Filed: Home > Features > Out and about with Internet Sharing